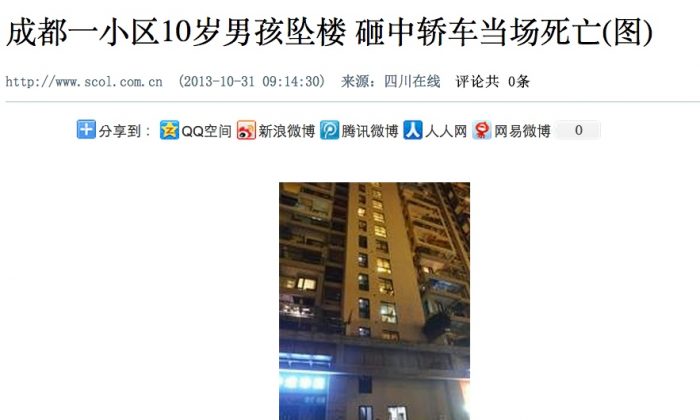 Screenshot showing the apartment building where a 10-year-old boy killed himself by jumping from the 30th floor, after his teacher told him off for talking in class. (Screenshot/Sichuan Online)
China

A primary school student in Sichuan Province jumped from the 30th floor of his family’s apartment building after a teacher told him off for failing to finish a detention task.

The 10-year-old boy was reportedly reprimanded for talking in class, and told to write a 1,000-character self-criticism letter by his teacher at a school in Chengdu.

When the boy did not finish writing the apology, his relatives said that the teacher told him to jump off a building, Sichuan Online reported.

In his textbook, the boy had written: “Teacher, I can’t do it. I dared not jump down from the building.”

A communist official in Jinjiang district told media that a police investigation is being conducted, according to the South China Morning Post. The school confirmed via its website that the boy and some other students had been told to write reviews about their behavior, after interrupting a speaking competition. The posting added that he died “by accident.”

The boy’s relatives hung banners outside the school, with slogans including: “The teacher forced our kid to jump off the building.”

Many Internet users discussed the tragedy on their Sina Weibo microblog accounts. One commented: “This is a crazy world. Adults and children are forced [to die]. Only corrupt officials and wealthy people can survive.”