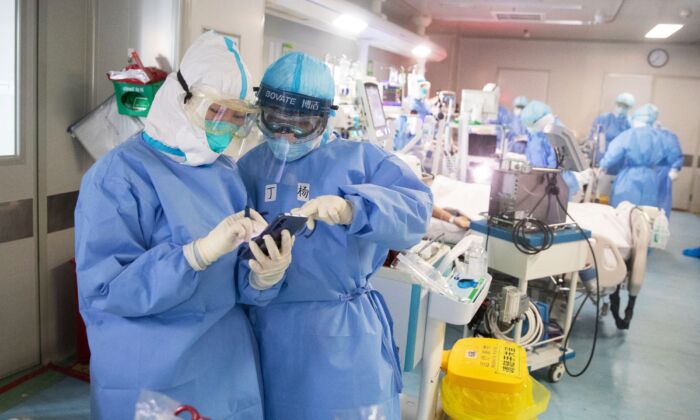 Medical staff check a mobile phone as they treat CCP virus patients at a hospital in Wuhan, China, on March 19, 2020. (STR/AFP via Getty Images)
CCP Virus

The Chinese regime has maintained that there have been no new domestic infections of the CCP virus in the entire country since March 18.

Local authorities say that the epidemic has leveled off, as they ease travel restrictions and tell people to return to work.

But the situation in the ground zero of China’s epidemic, the city of Wuhan, is much worse than what has been officially reported, according to a series of internal government documents obtained by The Epoch Times.

The documents include four reports from the Wuhan Municipal Health Commission, which were statistical data sheets about diagnostic test results in the city on March 14.

The data showed that there were 91 newly diagnosed patients in Wuhan on March 14. China’s National Health Commission only reported four cases for that date.

Meanwhile, two residential compounds in Wuhan posted notices to alert their residents that there were people living there who were diagnosed with the CCP virus on March 19—another indication that the Chinese regime is concealing the epidemic’s true scale.

The documents showed that for March 14, the city collected samples from 43 of the city’s virus testing agencies: 32 hospitals and 11 labs.

One data set recorded the details of each test, including names (which were redacted), ID number, age, gender, when and where the samples were collected, the number of times the person has been tested, which agency tested the sample, and the latest test result (positive or negative).

Among the positives, 91 samples were first-time positives.

In Wuhan, samples are only taken from a throat swab. Thus, these 91 samples can be understood as 91 new patients.

For example, the sample named WX2023027216 belongs to a 53-year-old man. He is currently being isolated at a quarantine center in Dongxihu district. His sample was picked up on March 13 and tested at the Wuhan Adicon Clinical Laboratory on March 14.

This was his first test for the CCP virus, which came back positive.

Among the positive samples, 51 were from relay stations, which are newly set up facilities in Wuhan after the regime closed down makeshift hospitals. Such field hospitals, set up inside stadiums, expo centers, and large gyms, were recently shut down after authorities claimed that there were fewer patients, and thus no need for them.

These relay stations are now used to isolate patients who have recovered and were discharged from hospitals—for medical observation, as some patients have relapsed upon discharge.

For example, sample 20S6338599 belonged to a 44-year-old man who was staying at the Changjiang Xincheng Relay Station. This facility has a capacity of 1,260 beds and is located in Jiang’an district.

On March 20, residents living in Qiaokou district in Wuhan posted photos of a notice released by the Hanjiadun Street neighborhood committee.

The committee stated, “Last night [on March 19], there were new diagnosed cases reported from the Lishuikangcheng residential compound.”

Another notice from the committee stated, “A resident from Building 12 of Lishuikangcheng was diagnosed [on March 19].”

The Meigui Xiyuan neighborhood committee in Hanyang district, also in Wuhan, released a notice to residents on March 20, stating that two fellow residents who live at Unit 116 were diagnosed with the virus on March 19.

Though Chinese state-run media reported that 3,675 medical staff left Wuhan after being dispatched there to help treat the large number of patients in the city, state-run newspaper Guang Ming Daily reported on March 19 that 453 doctors and nurses from Zhejiang Province were asked to support the Wuhan Union Hospital immediately.

According to China’s National Health Commission, by March 8, 42,600 medical staff had been sent to Wuhan and other cities in Hubei Province to treat COVID-19 patients.