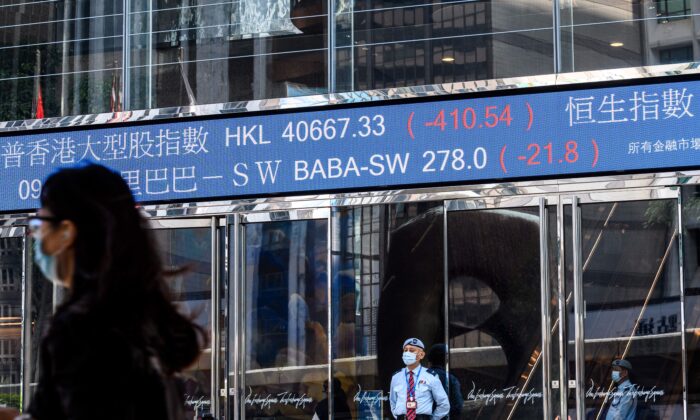 China’s Stock Market Correction May Have Room to Run

The Chinese stock market has been mired in its deepest slump since 2015.

Despite a surge on March 11—the last day of China’s annual National People’s Congress (NPC) event—Chinese stocks have slumped dramatically since reaching a high on Feb. 10. Despite efforts by several Chinese national asset managers in purchasing assets, the benchmark CSI 300 Index is still down 11 percent since Feb. 10.

And with the NPC—one of the most politically important events of the year—concluded, the Chinese stock market could see even more turmoil going forward.

The bearish sentiment has prevailed for much of the past month. Since their highs on Feb. 19, the Shanghai Composite Index is down 7 percent, while the Shenzhen Exchange Composite Index has declined 10 percent. The liquor company Kweichow Moutai, a bellwether Chinese stock, has dropped by 22 percent since its recent highs on Feb. 10.

The CSI 300’s decline since Feb. 10 is the biggest decline of any major global stock index in that span.

It’s important to note that the Chinese stock market is largely a domestic retail investor sandbox. Besides real estate ownership, investing in the stock market is a key avenue for average Chinese to accumulate wealth. Discussions on Chinese social media are prevalent and some of the most popular names could be very volatile.

Foreign institutional ownership of Chinese stocks, either through Hong Kong or directly from a mainland entity, is small but growing.

During this recent downturn, Beijing-affiliated investment firms, which have historically come to the aid of the markets, have largely been ineffectual in propping up the markets.

It has been an inauspicious start to the Year of the Ox. Chinese markets were sliding before the NPC commenced. Around the beginning of the NPC, the CSI 300 had already declined 9 percent from its most recent peak. It dropped 3.5 percent on March 8, and another 3.2 percent on March 9, all despite multiple reports suggesting that Beijing called upon the “Plunge Protection Team,” a group of government-controlled investment firms, to start buying shares.

Bloomberg News also reported that during this recent dip, foreign investment firms based in Hong Kong—through the Stock Connect program—had also been buying during the recent rout. The middle of last week saw more muted losses to slight gains, so there is evidence of buying activity either by Beijing-affiliated traders or foreign opportunistic traders, although that hasn’t been able to broadly offset bearish sentiment from retail investors.

A Mixture of Fears

There are several areas of concern with the Chinese stock market leading up to February that have caused this recent market collapse.

Firstly, the Chinese stock market had been red-hot. The CSI 300 Index rose 27 percent during 2020, one of the best performing indexes among major markets, despite the CCP virus pandemic. By comparison, the S&P 500 Index was up 16 percent last year.

Beijing, in some ways, had encouraged a stock market correction, by having state-controlled media warn of asset bubbles and emphasize the need to control speculation in financial markets.

There has also been speculation of tightening liquidity as China’s economy appears to be in relatively good shape on the surface.

In early March, Beijing set 2021 official GDP growth goals to be about 6 percent, significantly below consensus estimates. The Chinese Communist Party (CCP), which has run a loose monetary policy in recent years, gave indications that the generous stimulus policies may be a thing of the past. The CCP virus pandemic had temporarily halted plans last year to rein in excess leverage, and Beijing may choose to continue that trajectory going forward.

A Fortune report on March 9 stated that Weibo—China’s version of Twitter—had appeared to censor the Chinese term for “stock market” temporarily, a sign that the recent stock market rout has been a sensitive topic for Beijing.

It’s also possible that the market decline still has some room to run.

“A-share sentiment declined for a third week to 50, down by 18 percent so far post-Chinese New Year break but still far from the technical oversold threshold of 20s,” according to a March 11 Morgan Stanley note issued to clients.

The investment bank said its “momentum indicator” factor, which tracks stocks that have experienced a great amount of gains over the last several months, “continued to trend downward.”