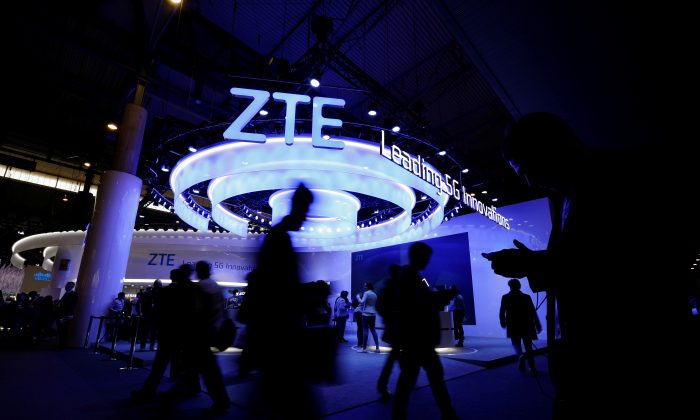 People walk next to ZTE booth at the Mobile World Congress in Barcelona, Spain on Feb. 25, 2019. (Rafael Marchante/Reuters)
By Reuters

HONG KONG—China’s ZTE Corp made a net profit of 276 million yuan in the fourth-quarter as it recovered from costly U.S. sanctions which dragged it to an overall 2018 loss of 7.0 billion yuan ($1 billion).

The world’s fourth-largest telecommunications equipment maker by market share was forced to stop most business between April and July last year due to U.S. sanctions. It paid $1.4 billion to lift these and reported its worst half-year loss of 7.8 billion yuan in August.

The company had expected a first-quarter net profit of 800 million to 1.2 billion yuan, against a net loss of 5.4 billion yuan year earlier. It reported a profit of 4.57 billion yuan in 2017 before it became embroiled in a crippling row with the U.S. government over violations of export restrictions.

ZTE said its revenue for the quarter ending in December was 26.7 billion yuan, while its full-year revenue dropped 21.4 percent to 85.5 billion yuan, against an average estimate of 87 billion yuan by 12 analysts.

A bipartisan group of senators introduced a bill on Feb. 5 that would reimpose sanctions on ZTE Corp if the Chinese telecommunications firm fails to live up to U.S. laws and an agreement with the Trump administration.

The bill was introduced amid China-U.S. trade talks and as Washington tries to extradite the chief financial officer of Huawei Technologies. Canada detained Meng Wanzhou in December at the request of U.S. authorities investigating Huawei’s alleged scheme to use the global banking system to evade U.S. sanctions against Iran.

Meng has been released on bail and is confined to her home in Vancouver while court proceedings are underway. Canada announced on March 1 that an extradition hearing against Meng would proceed.

Many members of Congress view ZTE and Huawei as national security threats, worrying that the use of their technologies in the United States could make it easier for China to steal secrets.

By Sijia Jiang. The Epoch Times contributed to this report.