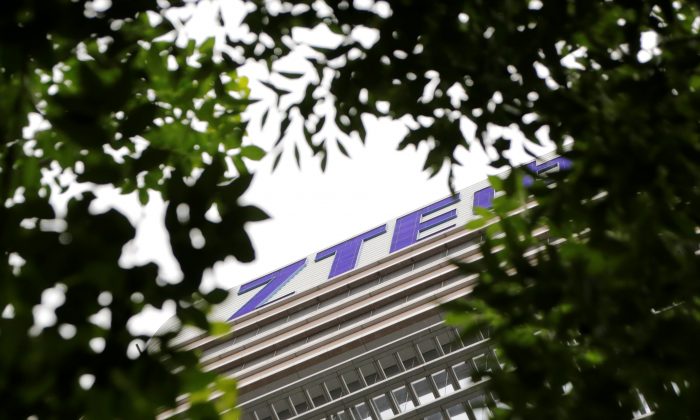 The logo of China's ZTE is seen on the building of the company's research and development center in Beijing on June 13, 2018. (Jason Lee/Reuters)
US-China Relations

The United States said on July 11 that it signed an agreement with ZTE Corp. that paves the way for the Chinese tech company to resume operations after a nearly three-month ban on doing business with American suppliers.

The ban on China’s No. 2 telecommunications equipment maker will be removed once the company deposits $400 million in an escrow account, the U.S. Commerce Department said in a statement announcing that an escrow agreement had been signed.

The ban on ZTE has been a source of friction between Washington and Beijing, which are engaged in an escalating trade dispute.

ZTE did not immediately respond to a request for comment.

The escrow agreement is part of a $1.4 billion settlement ZTE reached with the Commerce Department last month to regain access to U.S. suppliers, whose components it relies on for its smartphones and networking gear.

The ban was imposed in April after Commerce Department officials said ZTE made false statements about disciplining 35 employees after it pleaded guilty last year to violating U.S. sanctions by illegally shipping U.S. goods and technology to Iran, the Commerce Department said.

Once the ban is lifted, ZTE, which employs around 80,000 people, is expected to restart major operations, which would remove a sticking point within the broader U.S.-China trade war. The reprieve for ZTE coincides with a new Trump administration threat of 10 percent tariffs on $200 billion of Chinese goods.

In its statement, the Commerce Department said the ZTE action is a law enforcement matter unrelated to broader discussions of trade policy.

“The ZTE settlement represents the toughest penalty and strictest compliance regime the department has ever imposed in such a case,” Commerce said. “It will deter future bad actors and ensure the department is able to protect the United States from those who would do us harm.”

President Donald Trump tweeted in May that he had closed down ZTE and then let it reopen, although no agreement to lift the ban had yet been reached. He said he was working with President Xi Jinping to give ZTE “a way to get back into business, fast.” ZTE had said the ban threatened its survival. White House trade adviser Peter Navarro said last month that Trump decided to allow ZTE to again buy U.S. parts and components as a personal favor to Xi to show good will for bigger efforts. U.S. suppliers have been anxious to resume business since U.S. Commerce Secretary Wilbur Ross announced the settlement on June 7.

ZTE paid over 200 U.S. companies more than $2.3 billion in 2017, including Qualcomm Inc., Intel Corp., Broadcom Inc., and Texas Instruments Inc. Shares of smaller U.S. suppliers, which may be more dependent on ZTE, pared losses after the news, including optical component makers Acacia Communications Inc., Oclaro Inc., and Lumentum Holdings Inc. Under the new June 7 settlement, ZTE also was required to change its board and management within 30 days.

ZTE‘s shares were suspended for almost two months after the ban was imposed and have lost about half their value.