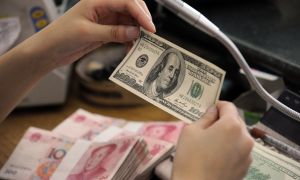 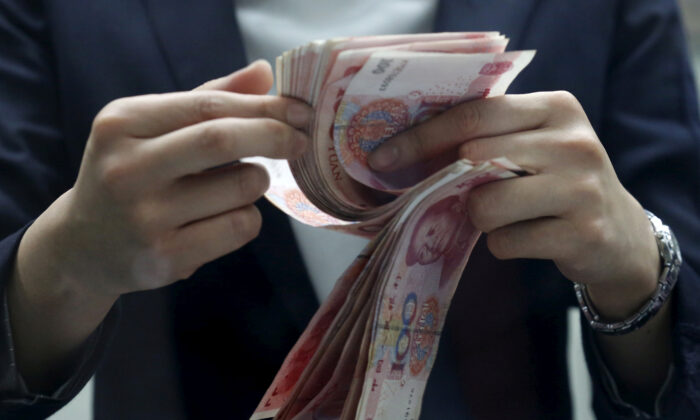 A clerk counts Chinese 100 yuan banknotes at a branch of a foreign bank in Beijing, China on Jan. 4, 2016. (Kim Kyung-Hoon/Reuters)
Business & Economy

BENGALURU, India—The Chinese yuan will slip by year-end to deeper lows last hit against the U.S. dollar during the 2008 global financial crisis as the authorities nudge the partly managed currency down while the U.S.-China trade war rumbles on, a Reuters poll showed.

With global uncertainties aplenty and a U.S. election year approaching, any possible resolution to the trade war at next week’s talks will be hampered by signs of a weakened yuan. Chinese markets are closed until Oct. 7 for public holidays.

To counter losses from the trade war and regain export competitiveness, the People’s Bank of China has consistently set the yuan’s mid-point rate above the key 7 per dollar rate, allowing it to fall about 2 percent after Washington labeled it a currency manipulator in August.

The currency is forecast to hover around the same rate by March 2020 and then appreciate to 7.16 per dollar by this time next year.

“The yuan is being held up by string, bogies and glue. The trade war is going to get worse,” said Michael Every, head of financial markets research, Asia-Pacific at Rabobank, who was the most pessimistic forecaster for the 12-month horizon at 7.75, not seen since early 2007.

“There will be more downward pressure on the yuan, and when that happens it is bad news for all emerging market currencies.”

Analysts were divided on expected moves in U.S.-China trade relations, with over 60 percent anticipating further deterioration or a continuation of the status quo and the rest forecast an improvement.

Forecasts for where the yuan will trade in a year were divided too, with 31 of 60 respondents expecting it to weaken further and 29 respondents seeing the yuan gaining from here.

“I think that there might be some signs in the shorter term to say that things will be the same or perhaps the trade tone improves or perhaps there is a minor deal,” said Martin Rasmussen, China economist at Capital Economics.

“But some of the core issues at the center of the trade war such as industrial policy, intellectual property theft and so on—we do not think that China will be willing to compromise a lot.”

These developments keep threatening gains for other Asian currencies, barring the Japanese yen. All but one respondent to an additional question expected another sharp depreciation in the Chinese yuan to pose “serious risks” to other major Asian currencies over the coming year.

“Unless an interim trade deal materializes, we think economic and monetary easing pressure will see CNY weaken, even though it will likely be paced by the PBoC,” said Khoon Goh, head of Asia research at ANZ in Singapore, referring to the People’s Bank of China.

A much weaker currency would elevate risks of capital outflows, something China has controlled for years, but a weak growth outlook and expectations of further policy easing make things difficult for the world’s second largest economy.

“They will have to continue doing whatever is necessary to try and keep money in. But there’s a limit to how much tighter capital controls can get—they are already incredibly draconian,” Rabobank’s Every added.