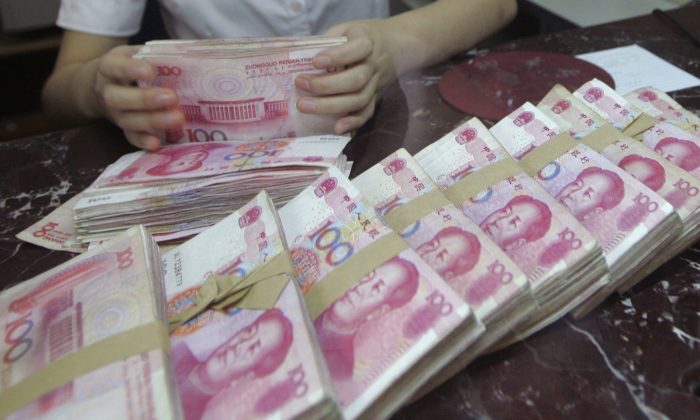 SHANGHAI/HONG KONG—China’s yuan slumped to a fresh 11-year low against the dollar on Aug. 26 and stocks fell as the Sino-U.S. trade war sharply escalated.

In Hong Kong, a weekend flare-up in violence during anti-government protests added to pressure on share prices.

The onshore yuan fell 0.6 percent in early trade to 7.15 per dollar, its weakest since February 2008 and its second biggest one-day drop of the month. The offshore yuan fell to a record low of 7.1850, before regaining some ground to around 7.1595.

The Chinese state authorities have allowed the tightly-managed yuan to fall some 3.6 percent so far this month as trade tensions between Beijing and Washington worsened, sparking fears of a global currency war.

On Friday, U.S. President Donald Trump announced an additional duty on some $550 billion of targeted Chinese goods, hours after China unveiled retaliatory tariffs on $75 billion worth of U.S. goods.

“This tit-for-tat escalation shows how unlikely a trade deal and de-escalation have become,” Louis Kuijs, of Oxford Economics, wrote in a note late on Sunday.

“The impact of the new tariffs on China’s economic growth will be sizable,” he said.

China’s central bank moved to devalue the yuan in early August following new U.S. tariff threats because China was continuing to renege on agreed-upon provisions. On Friday, traders thought the yuan was signaling a floor at the 7.1 level.

But Ken Cheung, chief Asian FX strategist at Mizuho Bank in Hong Kong, expects further weakness in the yuan for the rest of this year following the latest dramatic escalation.

“The PBOC has not yet signaled its bottom line for the yuan,” Cheung said, referring to the People’s Bank of China, the central bank.

In Hong Kong, the Hang Seng Index dropped more than 3 percent in morning trade as investor confidence continued to weaken amid the deteriorating trade outlook and the latest flare-up in violent anti-government protests in the city.

“The sentiment toward local companies is really bad. People have been pessimistic on the rental and tourism outlook and what happened over the weekend doesn’t help,” said Alex Wong, director at Ample Finance Group in Hong Kong.

On Monday, the Chinese central bank injected 150 billion yuan worth of funds into the financial system via its medium-term lending facility, or MLF. It kept the interest rate on the instrument unchanged at 3.3 percent.

Markets had expected the PBOC to keep key rates steady this week, but a cut is expected by mid-September after a policy review by the U.S. Federal Reserve, as Beijing steps up efforts to lower borrowing costs to support growth.