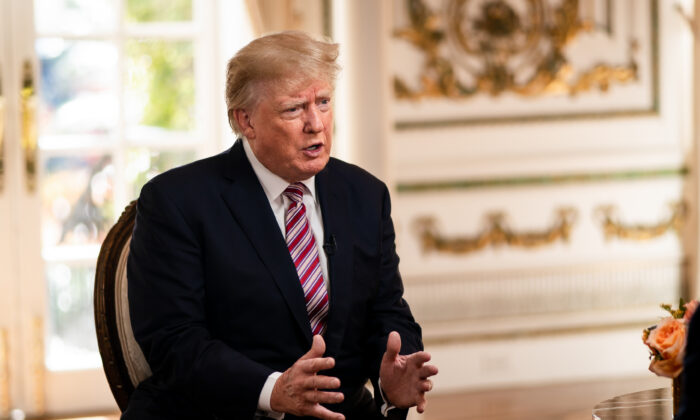 Former President Donald Trump has warned that the Chinese regime will invade Taiwan after seeing Russian troops move into Ukraine.

Such an invasion against self-governing Taiwan will occur because Chinese leader Xi Jinping and Russian President Vladimir Putin are an example of “twin sisters,” Trump said during an interview on The Clay Travis and Buck Sexton Show on Feb. 22.

“China is gonna be next,” Trump said. “Absolutely. Not with me, they wouldn’t have.”

“They’re waiting ’til after the Olympics. Now the Olympics ended, and look at your stopwatch, right? No, he wants that just like … It’s almost like twin sisters right here,” he added.

“Because you have one that wants Taiwan, I think, equally badly,” Trump added. “Somebody said, ‘Who wants it more?’ I think probably equally badly.”

He suggested that neither Putin nor Xi would make a move if he were the president.

Putin and Xi met in China earlier this month. After their meeting, they released a lengthy statement, claiming that the two bordering nations enjoy strong ties in which there would be “no limits” in their partnership and “no ‘forbidden’ areas of cooperation.”

Xi—who is likely to be handed an unprecedented third term in office at an important Chinese Communist Party meeting later this year—vowed in October that “reunification” of Taiwan with China would “definitely be realized.”

China and Taiwan are separated by the Taiwan Strait, which is about 80 miles wide at its narrowest point.

The Chinese regime sees Taiwan as part of its territory that must be united with the mainland, by force if necessary. However, Taiwan is a de facto independent country, where Taiwanese people elect their own government officials through democratic elections.

Rep. Michael McCaul (R-Texas) also saw a connection between Ukraine and Taiwan, while speaking to ABC earlier this month.

“Xi is watching what is happening [in Ukraine], our adversaries are watching,” McCaul said. “If Putin can go into Ukraine with no resistance, certainly, Xi will take Taiwan. He’s always wanted this.”

In light of its ambitions toward Taiwan and the broader Asia–Pacific region, Beijing has been engaged in an aggressive program of military modernization. Part of this includes expanding its nuclear arsenal, with a 2021 Pentagon report estimating that the regime might have 700 deliverable nuclear warheads by 2027, and as many as 1,000 by 2030.

The report pointed out different military actions the Chinese regime might deploy against Taiwan, including air and maritime blockades, precision airstrikes, and a full-scale amphibious invasion.

In recent years, Taiwan has been bearing the brunt of persistent Chinese military harassment, with military jets flying into the island’s air defense identification zone (ADIZ) on a regular basis. According to Taiwan’s defense ministry, the latest incursion happened on Feb. 23, when two J-16 military jets entered the island’s southwestern ADIZ, prompting the island to deploy its military aircraft and air defense missile systems in response.

A recent survey conducted by the Taiwanese Public Opinion Foundation found that most Taiwanese do not believe Russia’s invasion of Ukraine would lead to Beijing attacking the self-governing island. The survey polled 1,079 people for two days ending on Feb. 15.

“The world is watching us. We must ensure that our allies, like Taiwan, know they can rely on the U.S.,” Hinson added.