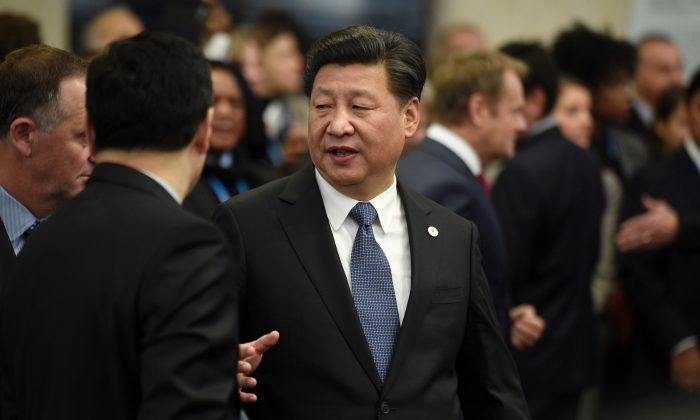 Through the age-old Chinese literary device of using allusions to communicate meaning, Chinese Communist Party leader Xi Jinping has indicated his intention to purge two former officials who for a long time were the most powerful individuals in China.

The allusions were made in “Xi Jinping’s Treatise on Impartial and Strict Party Discipline and Standards,” a book of speeches made last year by Xi at various meetings with officials, which went into circulation countrywide on Jan. 3.

It’s one step away from naming someone.
— Li Ding, senior researcher, Chinascope

People’s Net, the Web edition of official Party news outlet People’s Daily, carried a summary of the treatise and a sample of the offerings. Many of the speeches in the book were made public for the first time, People’s Net claimed.

One such speech was to inspectors of the Chinese regime’s anti-corruption agency in January 2015. Some Party leaders, Xi said, have “established a clique,” became a “‘Taishang Huang’ with extensive reach,” accumulated “absolute authority,” and have “great potential to dominate.” In another newly released speech dated February, Xi told key provincial officials that no cadres are above the law, and that there are no “iron-cap princes” in the Party.

Analysts say that the allusion Taishang Huang is a direct reference to former Party chief Jiang Zemin, and “iron-cap princes” refers to Jiang’s trusted right-hand man, the former regime vice-chair Zeng Qinghong. By singling out the powerful Party duo at the start of the year, analysts add, Xi Jinping has set the agenda for this year’s anti-corruption campaign.

Li Ding, a senior researcher at Washington-based Chinascope, an organization that specializes in translation and analysis of Communist Party documents, told Epoch Times that Xi Jinping is referencing Jiang and Zeng in his speeches, because the allusions are “very explicit.”

“It’s one step away from naming someone,” Li said in a telephone interview.

Take Taishang Huang, a title held by emperors who abdicate in favor of another ruler in Chinese dynastic history. In modern times, the title is reserved for retired leaders who are perceived to be puppet masters, wielding power behind the throne. Because Jiang Zemin has been widely known to still head a sprawling, powerful Party faction since formally stepping down as leader of the Chinese regime in 2002, “any Chinese person will immediately link Xi’s reference to Jiang,” Li said.

Read on its own, the term iron-cap prince refers to a sort of political immunity. In the Qing Dynasty, there were 12 princes who were allowed to inherit their father’s title in perpetuity, a special right since the sons of princes normally assume a title one rank lower than that of their father. Anti-corruption investigators started using the term last year in a generic fashion to reference officials who presume their privileged political positions would keep them safe from corruption investigations.

However, since an article published last February on the anti-corruption agency’s website highlighted the crimes of the corrupt Prince Qing, a long-dead Manchu noble and a so-called iron-cap prince, mentions of iron-cap princes became linked with Zeng Qinghong, Jiang’s enabler and hatchet man. Many have read the criticism of Prince Qing as an open attack on Zeng Qinghong since the two share the Chinese character “Qing” in their names.

Xi Jinping’s making public his speeches and allusions suggests that the anti-corruption campaign has embarked on a “new step,” Chinascope’s Li Ding said. Earlier, high-ranking officials earmarked for purge were referred to as “Big Tigers,” a blanket term that kept people guessing who precisely was being targeted. “But ‘Taishang Huang’ is very specific,” Li added.

Xia Xiaoqing, a political analyst with the Chinese edition of Epoch Times also thinks that Xi Jinping is alluding to Jiang Zemin in his new book of collected speeches.

The book and the recently announced sweeping reforms in the Chinese military—analysts say Xi is using the reforms to consolidate his political power—clearly transmit a message: “Jiang Zemin, the ‘biggest tiger,’ is the target of the 2016 anti-corruption campaign, and all major political maneuvers will revolve around it,” Xia told the Epoch Times.

The Epoch Times has pointed out several signs that Xi Jinping had spent 2015 homing in on Jiang Zemin.

Also, the purging of retired elite officials who once held key positions in the regime and are key allies of Jiang Zemin was carried out with little fanfare, an indication that a bigger prize is afoot.

Moreover, many of Jiang’s allies and associates in the massive state-owned enterprises, particularly in the telecommunications industry where his son Jiang Mianheng holds immense influence, were purged.

And Jiang himself was obliquely targeted, first in a scathing editorial in state mouthpiece People’s Daily, and then in the removal of a stone bearing his inscription which was prominently displayed in the Communist Party’s training school for cadres in Beijing.

Now, with Xi Jinping’s new book made publicly available in a political environment where allusions and coded language or actions can hold dire significance, Jiang Zemin’s position is looking increasingly precarious this year.