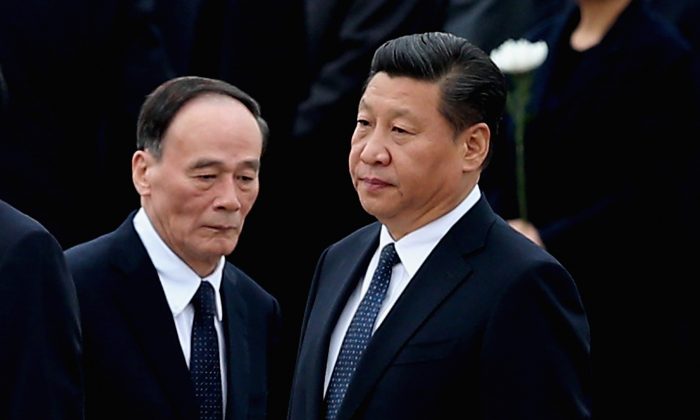 When the leadership of the Chinese Communist Party lines up for official events with their uniformly dyed black hair, dark suits, and maroon ties, they give the impression of monolithic stability.

The last few years, however, and particularly the last one, have seen any notion of an unruffled elite be blown apart by Chinese leader Xi Jinping.

Xi has accused disgraced top officials of being political conspirators. His anti-corruption inspectors have criticized the senior leadership of key government bodies for lacking political awareness. And the anti-corruption agency declared in a recent circular aimed at high-ranking cadres that “all is actually not well.”

The official revelations of a fractious elite indicate that Xi Jinping’s anti-corruption campaign has all along been a tool for ousting a rival faction led by former Communist Party head Jiang Zemin, and for forcing the Party to conform to new disciplinary norms established by Xi himself. The Jiang faction was earlier suspected of masterminding a coup to remove Xi from office.

Given that the entire thrust of Xi’s anti-corruption campaign has been to compel the political loyalty of Chinese officialdom, if the campaign continues, crucial political changes may take place.

Though Xi is the leader in name, he rose to the job in a system that had been controlled by a former leader—the godfather-type figure Jiang Zemin—for over two decades. Jiang came to power after the 1989 Tiananmen Square massacre, and in the years that followed, he and his faction gained a stranglehold over the country, including control of the military, the security apparatus, the propaganda system, and the economy.

As Chinese officials continue switching their allegiance to Xi Jinping, the moment is approaching when he will become the unquestioned leader, having the backing of the great majority of cadres. Xi will consolidate this status when he takes down Jiang.

With Jiang and the old political forces out of the way, Xi can contemplate new and different political futures for China.

Until recently, the influence of Jiang on elite politics was virtually unopposed following the death of former paramount leader Deng Xiaoping in 1997. Hu Jintao, Deng’s designated successor of Jiang, was politically shackled by the “collective leadership” of Jiang’s allies in the Politburo Standing Committee, the regime’s top decision-making body.

Xi Jinping was in some ways forced to deal with Jiang Zemin’s gang when he took office. First, Xi was fully aware of the fate of Hu Jintao, and wanted to be his own man. Also, Jiang’s key allies were planning to overthrow Xi—a plot revealed to U.S. officials in China by a former top provincial police official in his failed defection attempt in 2012.

This year, Xi indicated that political disloyalty was the more serious of the crimes committed by Jiang’s men.

In speeches and in articles, Xi and the anti-corruption agency named Zhou, Guo, Xu, and several others as political conspirators who formed “cliques and cabals” to “wreck and split the Party,” the latter quotation clearly a hint at the coup attempt.

In a Nov. 2 speech, Xi denounced the presence of an “extremely small number of high-level cadres [who] have inflated political ambitions” in the Party.

A Nov. 21 article by the anti-corruption agency argued that “political security” is paramount for “the Party and the country,” and senior cadres should never “relax their political awareness” given the presence of fractious elements like Zhou Yongkang and others in the regime. Senior cadres, the article continued, should stop “keeping company with those in the wrong.”

The article very clearly draws a line in the sand, according to independent political commentator Li Tianxiao.

“After Xi Jinping became the ‘core’ leader at the 6th Plenum, it became important for officials to mind their attitude toward Xi and his camp,” Li said. Loyalty to Xi has become “a political position, and is considered being politically disciplined.”

The title of “core,” while largely symbolic, is a mark of a Party leader’s prestige and power.

Li said that the Nov. 21 article serves as both warning and opportunity for officials who are still aligned with Jiang—the last core leader—to throw in their lot with new Party paramount Xi, or get removed before the big political reshuffle in 2017.

The article, Li added, also signals the start of the “comprehensive clearing” of Jiang’s remaining allies in the top leadership, and Jiang himself.

Through the anti-corruption campaign, Xi Jinping has placed himself in a position that allows for all kinds of future political scenarios that would be impossible under Jiang Zemin, whose power stemmed from corruption and kleptocracy.

Already, Chinese scholars have suggested the possibility of China’s taking on a presidential system of governance.

In November, the Xi leadership rolled out a pilot program for a new state anti-corruption body that answers to the Chinese legislature, and not the executive branch. Having this body answerable to the legislature may anticipate a change in the structure of the Chinese regime, with the Party no longer being in charge of everything.

If Xi takes the anti-corruption campaign to its logical conclusion, the inadvertent outcome might be a post-communist China.