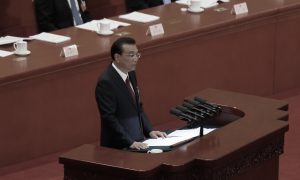 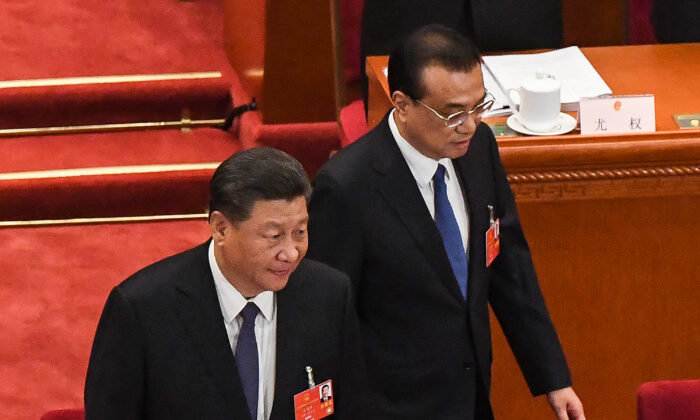 Chinese leader Xi Jinping (L) and Premier Li Keqiang (R) arrive for the opening session of the National People's Congress (NPC) at the Great Hall of the People in Beijing on May 22, 2020. (Leo Ramirez/AFP via Getty Images)
Thinking About China

The Chinese regime’s media has continuously promoted Chinese leader Xi Jinping’s high-profile speeches he delivered at the APEC and G20 video conferences. Xi laid out his ambitious plans of building up China and on the surface it sounds impressive. However, it won’t change the fact that the regime is becoming isolated from the international community. Xi’s grand plans only serve to maintain his authority within the Chinese Communist Party (CCP).

Meanwhile, Chinese premier Li Keqiang believes that China’s economy is in trouble. He has held a series of meetings, anxiously promoting domestic consumption, and even focusing on farmers’ incomes and livelihood.

Since November, Xi has attended numerous video conferences, such as the Shanghai Cooperation Organization, BRICS, APEC, and G20. State-run media has continuously publicized Xi’s speeches, making it appear that he is making diplomatic breakthroughs and that the CCP is not isolated from the world. This is exactly what Xi wants the Party to see.

In the face of domestic and international pressures, the top leadership comes up with different political slogans to govern the country, rather than taking concrete action.

Xi repeats the propaganda Party line of “a community with a shared future for mankind” in his speeches. Instead of admitting that the CCP mishandled the coronavirus outbreak, Xi likes to tell the international community that the regime is working hard to fight against the pandemic and it will “play a greater leading role in the international order and global governance in the post-COVID era.” He talked about building “a global firewall against COVID-19” at the 15th G20 Leaders’ Summit.

Regarding the economy, Xi said “to restore the secure and smooth operation of global industrial and supply chains, explore the liberalization of trade of key medical supplies.”

Doesn’t he realize that the supply chain is leaving China and may not return?

Compared with the Regional Comprehensive Economic Partnership (RCEP) trade agreement that was signed by 15 Asia-Pacific nations on Nov. 15, the CPTPP could be potentially more lucrative for Beijing.

In order to appease ASEAN countries, the CCP pretends to make concessions on the RCEP. How can the CCP really afford to implement low tariffs and partake in free trade with so many countries at the same time? Don’t forget that the Sino-U.S. trade war is likely to continue. The CCP media also stated that the 14th Five-Year Plan will only establish a limited number of “free trade zones.” This is a far cry from the responsibilities of a free trade agreement. It can be seen that the top CCP leaders have no plans to implement the RCEP free trade agreement.

Xi’s so-called “practical measures” pertaining to his economic policies are just empty talk and cannot prevent China from being isolated internationally. The false propaganda will not solve domestic problems. Furthermore, the Chinese regime is under scrutiny by the international community.

While Xi was speaking at the G20 meeting, more than 80 democratic countries participated in the 2020 Halifax International Security Forum (HFX) that was called “China Vs. Democracy: The Greatest Game.” The discussion focused on how the Chinese regime has infiltrated and expanded its influence in the open global society, as well as the response strategies of various democratic countries. U.S. Secretary of State Mike Pompeo and NATO Secretary-General Jens Stoltenberg also participated in the discussion.

On Nov. 22, Li presided over a video conference among local government leaders and discussed the economic situation. Noting that the circumstances at home and abroad are grim and uncertain, Li urged local officials to tell the truth about their region’s economic state. He was quoted by Chinese media as saying, “Only when you tell the truth, can we come up with practical measures.”

This is tantamount to telling everyone that the 14th Five-Year Plan cannot solve the current problem, and short-term plans are needed to deal with the difficulties. Li told the local leaders to adopt policies based on the real situation of the market and to improve people’s livelihoods by creating more jobs in order to spur consumption and domestic demand, according to a report by state-run Xinhua.

Under internal and external difficulties, the CCP still continues to deceive its people from top to bottom. The CCP’s so-called major strategic policy of the “internal circulation economy” is not a “practical measure” for sustaining the country—on the surface, officials at all levels are going along with it and just playing politics.

The General Office of the State Council issued a notice on Nov. 24 on implementing a market policy in Beijing. It also stated that violations must be reported to authorities such as falsified financial reports of small and medium-sized enterprises.

It remains to be seen how long Xi can continue to promote his lofty policies.