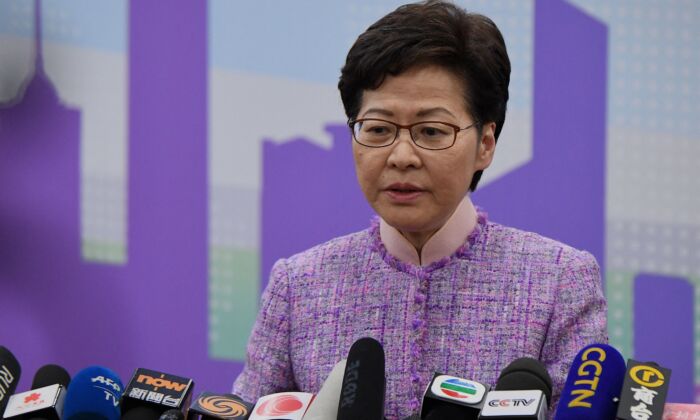 Chinese leader Xi Jinping on Dec. 22 praised Hong Kong’s first “patriots only” legislative elections as a success amid mounting criticism by Western nations saying the poll wound back democracy in the city.

Wednesday’s face-to-face meeting comes on the heels of a legislative election on Sunday. The election was swept by politicians backed by China’s ruling Communist Party (CCP) after leading figures in the pro-democracy opposition were jailed, or forced into exile. Further, only candidates determined by the CCP to be “patriots” were allowed to run.

Following the election, the United States and other western countries expressed “grave concerns” over the erosion of democratic elements of Hong Kong’s electoral system and growing restrictions on freedom of speech and assembly.

Beijing “fully acknowledged” the work conducted by Hong Kong leader Carrie Lam, Xi said on Wednesday as the pair met in Beijing, according to a statement released by Hong Kong authorities. Lam is on her three-day annual visit to the Chinese capital this week.

Lam’s last year report was conducted via a virtual meeting in January, during which Xi stressed the city must be governed by “patriots,” prompting overhauls of the city’s electoral process. The number of seats directly elected in the Legislative Council were cut from 35 to 20, and all candidates were vetted by a largely pro-CCP committee before they could be nominated.

The first election was held on Dec. 19, with a 30.2 percent voter turnout—the lowest since the city’s handover from British to Chinese rule more than two decades ago. In the last legislative election in 2016, more than 50 percent of the city’s 4.5 million registered voters cast ballots.

Despite the record low turnout, Xi praised the principle of “patriots administering Hong Kong” had been implemented, adding the city is “in good direction.”

The city has turned “from chaos to peace,” Xi said, in reference to mass protests in the summer of 2019 against the regime’s growing encroachment into the former British colony’s freedom. In June 2020, Beijing imposed a sweeping national security law, which has been used as a tool to further crush dissent in the city.

The vaguely-defined legislation punishes speech or acts deemed secessionist, subversive, terrorist, or perceived as colluding with foreign forced against the communist regime. Most of the city’s once-lively pro-democracy camps have been charged or convicted under the national security law or similar statutes.

Opinion polls indicate that Lam’s popularity among Hong Kong residents has plunged to a record low since the crackdown of protests in 2019. A survey conducted this month by the Hong Kong Public Opinion Research Institute shows the support rating for Lam was 35.8 percent, the lowest score of any of her predecessors.

Xi’s comments to Lam come three months ahead of the chief executive poll on March 27. The meeting has been closely watched for signs that Beijing would offer backing for the unpopular chief executive to seek her second term. Her five-year term ends in June 2022, and Lam has yet to indicate whether she will seek re-election.

The Associated Press and Frank Fang contributed to this report.