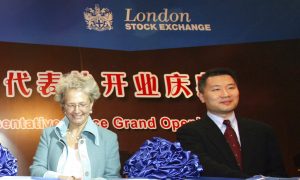 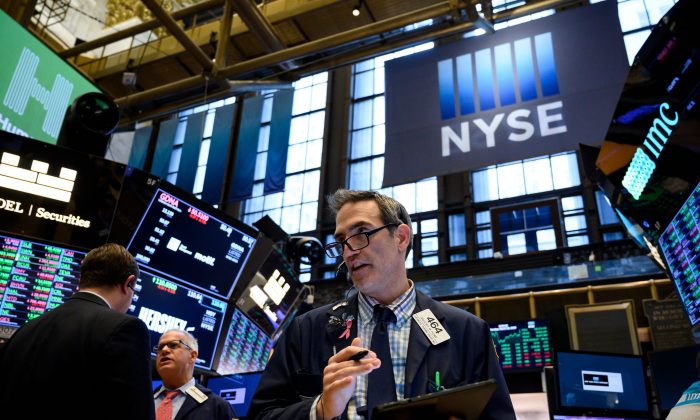 A trader works ahead of the closing bell on the floor of the New York Stock Exchange (NYSE) in New York City on March 18, 2019. (Johannes Eisele/AFP/Getty Images)
China Business & Economy

As the trade talks between the United States and China continue, the trade imbalance is just one part of a much larger struggle between the two largest economies in the world.

What many don’t realize is that Chinese companies listed on U.S. stock exchanges pose a very serious and imminent risk to the U.S. economy. In fact, it strikes at the very heart of the U.S. financial system.

Chinese Penetration of US Financial Markets

Roger Robinson, chairman of the think tank Prague Security Studies Institute, on May 2 presented a very startling picture of the extent to which the Chinese Communist Party (CCP) has inserted itself into U.S. financial markets during his speech to the Committee on the Present Danger: China (CPDC).

During the past two decades, CCP-controlled companies have become deeply integrated into millions of Americans’ portfolios. In fact, according to Robinson, there are more than 1,000 Chinese companies in the three main U.S. exchanges. In the New York Stock Exchange (NYSE) alone, there are more than 650 Chinese state-owned enterprises (SOEs); there are another 62 listed on Nasdaq and more than 500 more in the much less regulated over-the-counter (OTC) market.

Unlike soybeans or auto parts, the U.S. stock exchanges are the source of trillions of dollars of wealth and innovation. They serve not only U.S. interests, but much of world’s as well. That’s just one of the reasons why the threats posed by Chinese companies, which are state-owned enterprises (SOEs), are so dire. They could also prove fatal to U.S. pension and retirement systems, as well as the ability to generate wealth, attract investment, and remain the global leader in economic, technological and military might.

No Transparency or Oversight

To become listed on exchanges, companies are required to declare their business activities, disclose financial records, and other material facts to determine their legal and financial status. This is to protect both potential investors and the reputation of the exchange listing the companies’ stocks.

However, like the rest of its economy, Chinese companies are largely built on fraud and deception. False or even minimum disclosures and material omissions are typical. The nefarious activities they engage in are neither revealed in their disclosures to the listing authorities nor found in company profiles or fund prospectuses.

But the fault doesn’t just lie with Chinese firms. The exchanges themselves are also accountable for not demanding full transparency of Chinese firms’ activities before listing them. If exchange standards were enforced, they would have to exclude virtually every firm from mainland China from being listed. That may be why only a handful of Chinese companies are listed on Japan’s Tokyo Stock Exchange. Few of them can pass even the most mundane level of scrutiny.

Pawns of the Chinese Military

Just as concerning are the threatening and harmful activities in which some of these SOEs are involved and which are funded by U.S. investment portfolios. Many Chinese corporations are directly involved in national security threats against the United States.

These threats include activities such as cyberattacks against U.S. firms for data and IP exfiltration, enabling North Korean missile technology, and militarizing the illegal islands in the South China Sea.

Other listed SOEs participate directly in supporting and enabling human rights violations. These include suppliers of facial recognition systems and tracking technology used by China’s oppressive social credit system and to imprison Uyghurs in concentration camps on a massive scale. They all benefit from their listing on stock exchanges in the United States.

And yet the truth about these companies, whether about their financial status or what their business activities are, is either unknown or ignored by the exchanges. That’s critical because the exchanges are all about allowing investors to invest their money in vetted and valid companies.

But it gets worse.

Legally Bound to Spy and Steal

Unlike typical U.S. and European companies, Chinese firms aren’t about profits and quarterly reports. Rather, market penetration, industrial and intellectual property theft, technology transfers, and furthering the interests of the CCP are their focus. Simply put, these companies don’t exist to serve economic purposes; they’re “weaponized” entities that exist to serve the CCP’s political and military objectives.

Chinese SOEs— all of them—are pawns of the People’s Liberation Army (PLA), which is in the business of destroying the U.S. economy and oppressing and imprisoning millions of people. That’s because every Chinese company is subject to the integrated and far-reaching power of China’s National Intelligence Law, which came into effect in July 2017. Article 7 of the law requires all Chinese citizens to carry out intelligence work as ordered by the CCP. Every Chinese company, big or small, is in effect, an active intelligence-gathering asset of the CCP.

Hundreds of Chinese firms with dubious balance sheets, as well as sinister and anti-U.S. business activities, are part of various stock indices such as the MSCI index and others that are a part of millions of Americans’ portfolios. These market indices are commonly found in 401(k)s, IRAs, pension funds, and other investment vehicles.

The vast majority of Americans are passive investors in these companies via various indices. They’re most likely unaware of what or where their money is invested, but they’re invested just the same. The bottom line is that Americans are literally financing China’s expansion and threatening activities through their investments in the stock market.

The potential threat is sobering. On the one hand, the continued operation and investment into these weaponized companies constitutes a growing threat to the United States’ economic survival. On the other, if they’re de-listed or otherwise lose value, not only would millions of Americans’ retirement portfolios be subject to tremendous losses, but falling prices could trigger widespread equity devaluations and lead to market collapse.

As the economic war between the United States and China expands—and it is likely to do so—China’s companies may well come under increasing scrutiny by the Trump administration. That could lead to devaluation of many Chinese companies, if not delisting from U.S. stock exchanges and removal from indices. This would quickly lead to devastating losses in U.S. portfolios and pension funds.

If, however, Chinese SOEs aren’t reigned in, mutual funds and ETFs could soon be dominated—and therefore held hostage—by them. This possibility may be realized sooner than later as the United States ramps up the pressure on China’s unfair business practices with rising tariffs.

China’s fraudulent and weaponized state-owned enterprises are a much bigger and more complex problem to the United States than the trade imbalance. If Trump is serious about keeping America first, he must address this looming financial threat from China soon.