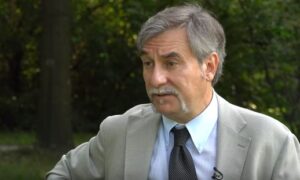 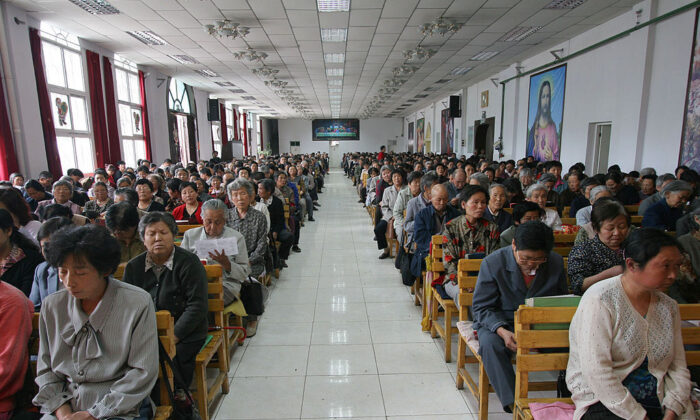 Christians pray during a mass at a church in Xining in China's northwest Qinghai Province, on July 3, 2005. China officially sanctions five religious groups: Protestantism, Catholicism, Islam, Buddhism and Taoism. The Chinese are allowed to worship only in state-sanctioned churches and temples. (China Photos/Getty Images)
Thinking About China

In China, there is a war taking place. Christianity is under attack. As Foreign Policy’s Azeem Ibrahim warns, the Chinese regime has the world’s most popular religion in its crosshairs.

Three years ago, the Vatican signed a deal with the Chinese Communist Party (CCP). Described at the time as “the fruit of a gradual and reciprocal rapprochement,” the deal was intended to give the religious greater freedoms in China. Today, however, “reciprocal rapprochement” has been replaced by unrestrained hostility.

“The repression of Christians,” writes Azeem, “whatever their denomination, is at its highest point since the Cultural Revolution.”

Of course, the Chinese regime’s utter disdain for organized religion has been visible for decades. Ever since Mao Zedong’s first Five-Year Plan, which was based on the belief that socialism would become the dominant ideology within China, religion has been a taboo subject.

In recent times, though, the crackdown on religion, especially Christianity, has been particularly brutal. Since 2018, the same year the Vatican and the CCP signed the agreement, a large number of churches have been shut down across China; roughly 10,000 Christians have been detained by the Chinese regime. According to Ibrahim, a number of prominent clergy members have been given lengthy prison sentences. With no other option, a large number of Christians “have resorted to underground churches in an attempt to avoid police harassment.”

With the CCP reportedly planning to roll out a “One Person, One File” system in the near future, government officials are busy filing reports on worshippers. This information is being used to discriminate against people in the employment sector, Ibrahim writes.

Furthermore, across the land, icons of Jesus Christ and the Virgin Mary have been replaced with portraits of the current CCP leader, Xi Jinping. This isn’t necessarily surprising, as the cult of Xi appears to be getting stronger.

In China, a country where meaning and hope are sorely lacking, tens of millions of Christians find themselves under attack. The message from the CCP is clear: Homage must be paid to one person and one person only. That man’s name is Xi Jinping.

For decades, research has shown that religion gives hope to the hopeless. In China, almost half the population survives on a monthly income of 1,000 yuan (roughly $140). For these people, life is incredibly difficult. Although Christianity doesn’t help pay the bills directly, it does provide people with a greater sense of structure. With greater structure, one is in a better place, both spiritually and psychologically, to cope with the inevitable stresses of life.

As the researcher Luna Greenstein writes, traditional religions help foster a sense of community. “These facets can have a large positive impact on mental health—research suggests that religiosity reduces suicide rates, alcoholism and drug use.”

However, in the eyes of the Chinese regime, a religion like Christianity is a threat to the establishment. Rather predictably, the regime has responded to Christianity in the same way it responded to Bitcoin. Cryptocurrencies threaten the legitimacy of the digital yuan, and Christianity, at least in the eyes of those in Beijing, threatens the legitimacy of the CCP. Both must be dismantled and ultimately destroyed. This is what happens when a nation is ruled by despots. Hope is always smothered. Freedom of choice disappears.

The Necessity of Religion

As the writer Daniel Peterson has noted, “religious people tend to be much happier and more satisfied than the irreligious.” In China, mental health crises are on the rise. Religious people, as Peterson outlines, tend to “cope better with crises.” For those 600 million people living on less than $40 a week, every day is a crisis, and an existential one at that. Furthermore, according to Peterson, the religious “recover faster from divorce, bereavement and being fired.” Additionally, by enjoying “higher rates of marital stability and marital satisfaction,” the religious tend to make better parents and community members. Not surprisingly, they’re also less likely to engage in criminal activity. Lastly, elderly religious people, although not immune to the effects of depression, are less likely to suffer from the illness than their skeptical counterparts.

Considering that the Chinese appear to have fallen out of love with marriage, and an increasing number are attracted to the idea of divorce, Christianity has the potential to improve the lives of millions of people. This isn’t to say that religion is a panacea for all of life’s ills. It’s not. Then again, nothing is. But in a country where hope is sorely lacking, Christianity offers the masses a legitimate lifeline. But the CCP isn’t in the business of giving lifelines. Its members are in the business of taking them away. The regime is interested in one thing and one thing only: maintaining its vice-like grip over society.

Twenty years ago, political scientist Robert D. Putnam released “Bowling Alone,” a groundbreaking book that outlined the problems facing broader society. In one particularly striking passage, Putman focused on churchgoers. They are, according to his research, “much more likely than other persons to visit friends, to entertain at home, to attend club meetings, and to belong to sports groups; professional and academic societies; school service groups; youth groups; service clubs; hobby or garden clubs; literary, art, discussion, and study groups; school fraternities and sororities; farm organizations; political clubs; nationality groups; and other miscellaneous groups.” With this paragraph, it’s easy to see why the Chinese regime has cracked down on Christianity.

Believers are more likely to get together, engage in deep, honest discussions, and quite possibly question the very nature of existence. In China, questioning the nature of existence isn’t allowed, and because of this, Christians must be silenced.