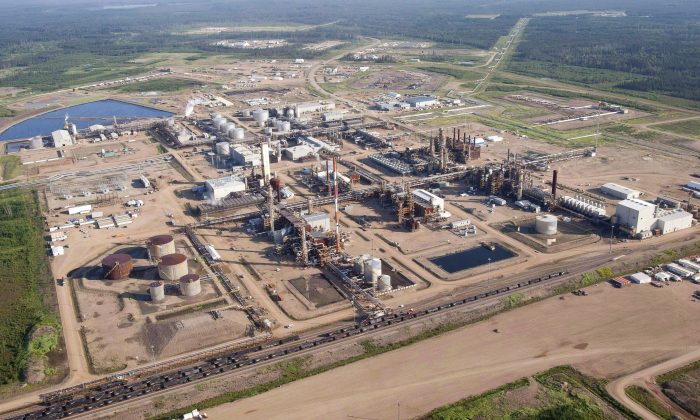 A Nexen oil sands facility is seen in this aerial photograph near Fort McMurray, Canada, on July 10, 2012. Nexen was sold to China's CNOOC Ltd. in December 2012. (The Canadian Press/Jeff McIntosh)
China Business & Economy

China is selling its oil fields in the United States, Canada, and Britain due to fear of Western sanctions, according to a recent Reuters report. Experts say Beijing’s over-reliance on U.S. markets and technologies could be fatal in the case of being sanctioned or losing its overseas assets.

China’s top offshore oil and gas producer, China National Offshore Oil Corporation (CNOOC), is preparing to exit its operations in the United States, Canada, and Britain due to the threat of sanctions, industry sources told Reuters. The company seeks to unravel its $15 billion investment in Canada’s Nexen, which produces approximately 220,000 barrels per day in the North Sea, Gulf of Mexico, and Canada’s oil sands.

After being delisted by the New York Stock Exchange (NYSX), the oil giant said it plans to launch IPOs on the Shanghai Stock Exchange, Reuters reported. CNOOC’s shares were suspended from trading on NYSX in March 2021 and officially delisted in October, understood as an effort started by the Trump administration to clamp down on entities with alleged links to the Chinese military.

The company had also mentioned the “risks of U.S. sanctions” in its 2021 annual report (pdf) released on April 12.

“It is impossible to predict whether the business of the Company or its affiliates … will be affected by the U.S. sanctions due to changes [in policies],” the report said while listing other risks from Western nations not limited to the United States.

Since the Trump administration, the Chinese Communist Party has faced increasing headwinds over its unethical trade practices and human rights abuses. The timing of CNOOC’s asset sale appears to be linked to a rise in oil and gas prices that resulted from Russia’s invasion of Ukraine, which could garner a higher price than it paid.

CNOOC is one of the largest Chinese state-owned enterprises, with a registered capital of about 18.2 billion. Last month, Reuters reported CNOOC had hired Bank of America to prepare for the sale of its North Sea assets as part of its $15 billion purchase of Canadian producer Nexen in 2013, its largest overseas acquisition. The move was seen as a strategic shift of focus to newer oil and gas developments and away from Western assets.

A senior Chinese business finance columnist, Chen Siyu, told The Epoch Times that Western sanctions against Russia struck fear into the CCP. And that Beijing will incur massive technological and economic losses if its overseas assets are confiscated by the United States and other western countries. Thus, it is rapidly selling overseas assets and returning CNOOC to domestic IPOs.

Chen said the CCP has been stealing Western technologies through its “Thousand Talents Program (TTP)” and “Made in China 2025 Initiative (MIC 2025)” to cut corners in its R&D and overtake Western technological advancements.

TTP is a controversial state-backed recruitment plan criticized by U.S. officials for its role in transferring Western research and technology to China. MIC 2025 is an initiative announced by the CCP in 2015 to invest heavily in domestic technology development in order to end Chinese dependence on foreign technology, transforming China into a global powerhouse of high-tech industries in 10 years.

“The CCP has to rely on the United States [for its technologies and markets] whether it likes to or not. [It cautiously avoids direct conflict with the United States, fearing severe consequences.] On the one hand, it sends mixed signals on the Russia-Ukraine conflict, both withdrawing and providing support to Russia. On the other hand, it strengthens domestic food production [in fear of Western sanctions].”

In a video conference on April 14, U.S. Secretary of State Antony Blinken called on China to “choose a [side]” in the Russia-Ukraine war, suggesting Beijing’s words and deeds on the issue were ambiguous and inconsistent.

On April 12, the U.S. Securities and Exchange Commission (SEC) added 12 China Concepts Stock companies to a delisting watchlist, according to the Chinese edition of Voice of America. As of that day, there were reportedly 23 Chinese companies on that list, including Weibo, a Chinese social media giant.

Presently, more Chinese companies listed in the United States may follow in the footsteps of CNOOC.