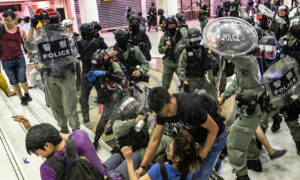 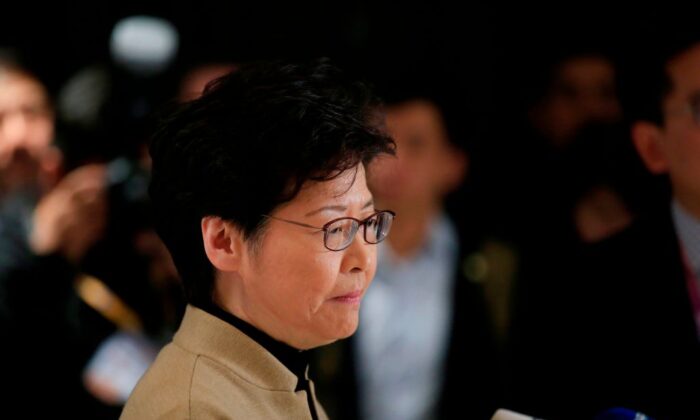 In the span of a few days, Hong Kong leader Carrie Lam received support for her handling of the months-long unrest in the city from another top Chinese official.

Han Zheng, the Communist regime’s top official overseeing Hong Kong affairs and the vice premier, met with Lam in Beijing in the morning on Nov. 6.

The meeting came two days after Lam met with Chinese leader Xi Jinping in Shanghai, where Xi affirmed her administration’s performance in dealing with the mass protests in Hong Kong, which began in June, over Beijing’s creeping encroachment into the city.

Han stated that the Chinese central government trusted Lam deeply, and gave his full approval of Hong Kong police who he said had “dutifully” carried out their job, according to Hong Kong media. On the other hand, Xi, during his meeting with Lam, did not state his affirmation of the city’s police force.

Over the course of the protests, Hongkongers have grown increasingly distrustful of the police, blaming officers for deploying violent tactics against protesters.

The Hong Kong Public Opinion Research Institute (HKPORI), in a survey of 1,033 people conducted over Oct. 31 to Nov. 1, found that 59 percent of respondents said they “very much agree[d]” that Hong Kong police “have engaged in unprofessional behavior such as conducting indiscriminate arrests and going out of control.”

Han asked Lam to remember to lead her team to “restart” and “move forward again.”

He then lashed out at the protests, saying that they had evolved into “nonstop violence,” which “seriously damages Hong Kong’s social order, undermines the rule of law, and challenges the bottom line of one country, two systems.”

The “one country, two systems” model is currently used in Hong Kong, following the city’s handed over from Britain to China in 1997. It was intended to preserve the city’s autonomy and freedoms not available in the mainland.

The current protests are a pushback against Beijing’s creeping influence in the city’s daily affairs, including in education and the press.

Han reiterated what was said in the communique from the Chinese Communist Party’s recently concluded political conclave, about the need for “perfecting” Hong Kong’s “legal system and law enforcement mechanism.” He did not, however, elaborate on how exactly that would be done.

He emphasized that Hong Kong should be governed in accordance with its mini-constitution, the Basic Law.

In response, Lam told Han that she was very much encouraged by meeting with Xi, which made her and her administration “more resolute” in ending the “violence” in Hong Kong, in accordance with “one country, two systems.”

Lam added that she was saddened to see that more than one-third of the over 3,000 people arrested since June were students.

While Beijing is throwing its support behind Lam, the Hong Kong leader’s popularity rating in the city has been declining rapidly since June.

HKPORI, in an October survey of 1,038 people, showed that Lam’s rating dropped to a record low of 20.2 points, down from 44.7 points registered at the end of May.

Pro-democracy lawmaker Alvin Yeung, in a press conference on Nov. 4, urged Lam to offer her resignation to Han when the two met, saying she failed to curb police’s heavy-handed tactics against protesters.

At the same press conference, pro-democracy lawmakers played a video taken during the protests over the past weekend, which showed police firing 22 canisters of tear gas in the span of less than a minute.

Hong Kong police at a press conference on Nov. 4 announced that they had arrested a total of 325 people from Nov. 1 to Nov. 3. They were arrested on charges including unlawful assembly and wearing a face mask during an illegal assembly.