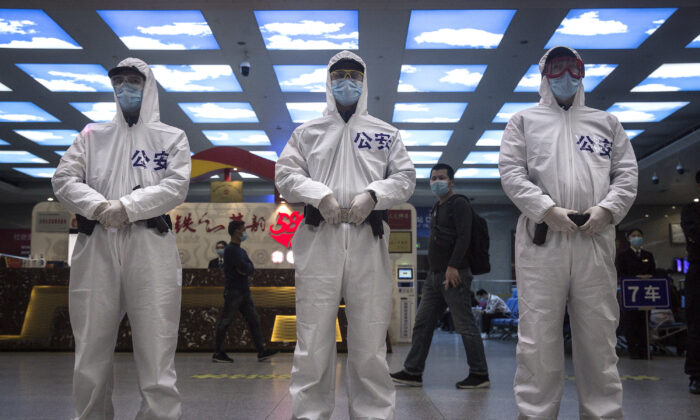 The Chinese regime was aware of the severity of COVID-19 during the early stages of the Wuhan outbreak but did not alert the public, according to a series of government documents recently obtained by The Epoch Times from a trusted source.

The leaked documents indicate that the top leadership secretly ordered the National Health Commission and regional governments to deal with the outbreak while keeping the public in the dark about the health crisis. In other words, Chinese authorities covered up the outbreak at the early stage instead of alerting the people in a timely manner.

The Associated Press was the first to report on the documents.

The Epoch Times obtained a document from the health commission of Guangxi Province, dated Jan. 15, 2020, which summarized a speech given by the vice director of the commission, Wang Yong. Wang’s speech indicated that the National Health Commission held a nationwide teleconference on epidemic prevention and control on Jan. 14, during which Ma Xiaowei, the head of the commission, conveyed direct orders from Chinese Leader Xi Jinping and Chinese Premier Li Keqiang.

Although the document didn’t fully detail the orders from Xi and Li, the high-level meeting shows that Chinese authorities were fully aware of the severity of the outbreak. Ma said that “it is the most serious public health emergency crisis since the SARS epidemic of 2003,” according to the document.

Wang advised authorities in Guangxi to “be more politically aware of the extreme severity and urgency of the virus outbreak” as he conveyed the directives from Xi and Li.

The document made it clear that “national security should be placed above anything else.” It stated that if any institution or individual planned to collect or examine epidemic-related specimens, they must first obtain permission from the local health commission.

U.S.-based China affairs commentator Li Linyi pointed out that the two dates are significant because they provide evidence of the CCP’s coverup of the outbreak. The dates indicate that authorities in Guangxi had already received internal orders from the top leadership, the CCP Central Committee, on epidemic control and prevention measures. Meanwhile, the public was unaware of the imminent health crisis.

Chinese authorities failed to warn the public right away, and instead, they made a public announcement on the human-to-human transmission of the CCP virus on Jan. 20, 2020, Li said.

Chinese media reports also made reference to the significance of the Jan. 7, 2020, meeting.

On Feb. 15, 2020, the CCP’s theoretical journal Seeking Truth published a speech that Xi gave on epidemic control and prevention on Jan. 7, 2020.

Hong Kong-based Chinese-language newspaper Ming Pao published an article on Feb. 17, 2020, that reported that CCP leaders during the Jan. 7, 2020, meeting required local governments to enforce “relevant measures” to ensure that the Chinese New Year holiday wouldn’t be disrupted, citing a source in Beijing.

Instead of warning the public, authorities wanted to continue to cover up the outbreak, thus losing the opportunity to effectively curb the virus’s spread.

Public Kept in the Dark

The publication obtained another document, dated Jan. 15, 2020, issued by the National Health Commission to all provinces in China. It stated that beginning in December 2019, “cases of pneumonia of unknown causes” had been reported in some hospitals in Hubei Province, and the result from pathogen analysis indicated that it was a “novel coronavirus.”

The top-secret document was designated as “most urgent” and recipients were instructed not to circulate its contents on the internet.

The document laid out measures for preventing infections within hospitals such as disinfecting rooms and requiring health workers to wear PPE (personal protective equipment).

On Jan. 16, Guangxi’s health commission created a work leadership group, consisting of seven teams, to oversee the local epidemic response, according to another internal document obtained by the publication.

China affairs commentator Li Linyi believes that the CCP had made preparations on all fronts in advance, while the people in the mainland weren’t told about the health crisis. That didn’t happen until Jan. 20, 2020, when China’s top respiratory expert, Zhong Nanshan, announced on state-run CCTV that there were had been confirmed cases of “human-to-human transmission.”

Three days later, Wuhan city was locked down to curb the spread of the virus.

By then, the public had realized the severity of the situation and that it was too late to safeguard themselves from the disease, Li added.