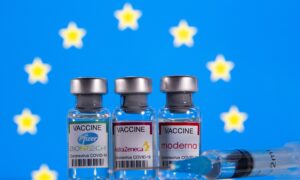 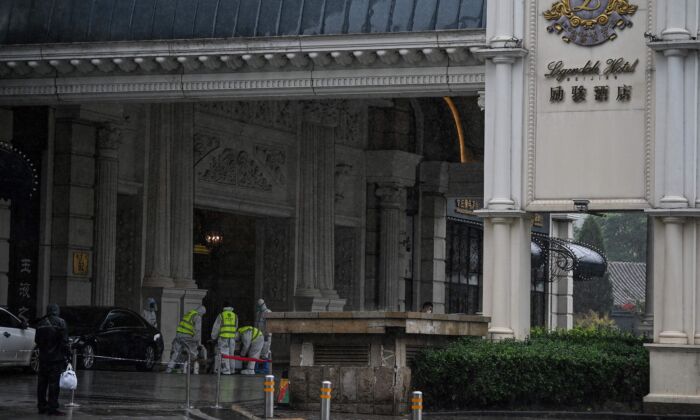 Health workers wearing personal protective equipment (PPE) work at the entrance to the Legendale Hotel in the Wangfujing shopping district in Beijing, China, on July 29, 2021. (Noel Celis/AFP via Getty Images)
INSIDE CHINA

The current outbreak, which started from Nanjing in eastern China’s Jiangsu Province, is now in its fourth week and involves more than a dozen provinces.

The Beijing regime has refrained from full lockdowns of major cities such as those seen during the early days of the COVID-19 outbreak in Hubei Province back in January 2020, to avoid totally paralyzing the economy.

“The current wave has led to the re-imposition of much tighter social distancing measures, which would significantly hurt the transport, tourism, and other service sectors,” Citi analysts wrote in a note on Aug. 11.

“We now expect full recovery of the service sector to be further delayed to the fourth quarter.”

Ding, who operates a 15-room lodge in the western highlands of Sichuan Province, said she had expected an occupancy rate of at least 80 percent on weekdays between late July and early August.

But with local infections being detected in Sichuan in late July and August, the actual occupancy rate of the lodge has been 20 percent to 30 percent.

When the summer travel season kicked off in July, she received $46,300 in bookings that month.

The Chinese regime quickly locked down residential compounds, quarantined a large number of residents, cut off intercity transportation, and forced mass COVID-19 tests on all residents when Nanjing first reported the current outbreak.

However, the outbreak quickly spread to other cities and provinces, from tropical Hainan to far north Inner Mongolia, and from western Sichuan to eastern Shandong.

The regime complained that the rapid spread is caused by the highly transmissible Delta variant, and had punished over 40 officials who it criticized for failing to respond properly to the latest surge of the CCP (Chinese Communist Party) virus, commonly known as novel coronavirus.

Since then, the governments of the cities where residents were diagnosed with COVID-19 have been executing more strict lockdown and quarantine policies, limiting people’s movements.

So far, domestic flights are still allowed to depart from cities that have reported cases, except for those leaving Nanjing, Yangzhou, and Zhangjiajie. But flights and trains entering Beijing from areas where cases had been reported have been cut.

China’s overall scheduled air capacity fell 31.9 percent over the last week, one of its steepest weekly drops during the pandemic, according to aviation data firm OAG.