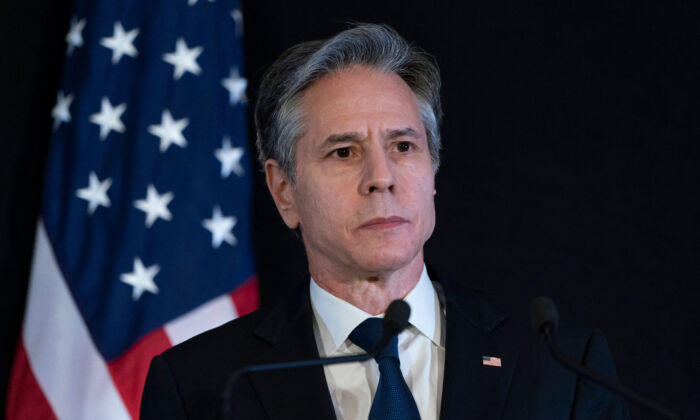 U.S. Secretary of State Antony Blinken looks on during a press conference in Geneva on Jan. 21, 2022. (Alex Brandon/AFP via Getty Images)
US-China Relations

China’s Tacit Support of Russia ‘On the Wrong Side of History’: Blinken

China’s communist regime is tacitly supporting Russia’s invasion of Ukraine and violating the spirit of the U.N. charter, according to U.S. Secretary of State Antony Blinken.

“First, there is the rhetorical support, or at least the absence of clear rhetorical denunciation by China of what Russia is doing,” Blinken said during a March 15 interview on CNN. “And this flies in the face of everything that China purports to stand for, including the basic principles of the U.N. Charter, including the basic principle of respect for sovereignty of nations.”

“Second, we are concerned at the prospect of China providing material support to Russia or undermining the sanctions that we put in place with countries around the world, something that we’ve communicated directly to China, including just this in the past 24 hours when the National Security Advisor, Jake Sullivan, met with his Chinese counterpart Yang Jiechi.”

The comments followed seven hours of talks between Sullivan and Yang on Monday which, among other things, sought to address issues raised in a diplomatic cable from the State Department which reportedly accused China of signaling a willingness to provide military support to Russia for its war in Ukraine.

The heightening of tensions correlates with an increasing belief among Western diplomatic and security communities that the war in Ukraine will alter the strategic situation in the Indo-Pacific.

National intelligence leaders warned in early March that Sino-Russian cooperation would only grow in the coming years. One former assistant secretary of state said that the United States and China were in a new “Cold War.”

Other recent reports accused Beijing of knowing about the invasion ahead of time and requesting that Moscow postpone the war until the conclusion of the 2022 Winter Olympics.

To that end, Adm. John Aquilino, commander of the United States’ Indo-Pacific Command, testified earlier in the month that the Chinese communist regime sought nothing less than to replace the international liberal order with a new system made in its own image.

“The People’s Republic of China is the most consequential strategic competitor that the United States has faced,” Aquilino said during a March 9 hearing of the House Armed Services Committee.

“They are executing a dedicated campaign that utilizes all forms of national power in an attempt to uproot the rules-based international order to the benefit of themselves and at the expense of all others.”

Blinken, during the interview, refused to go into specifics of what the consequences for China would be should it provide material support to Russia but said that such a course of action was not something that the United States would “take sitting down.”

The secretary of state said during a separate interview with NPR on Wednesday that the United States was watching the Chinese communist regime very closely for any overt moves towards supporting Russian war efforts in Ukraine.

“China’s already on the wrong side of history when it comes to the Ukraine,” Blinken said. “If China actually provides material support in one way or another to Russia in this effort, that would be even worse, and that’s something we’re looking very carefully at.”