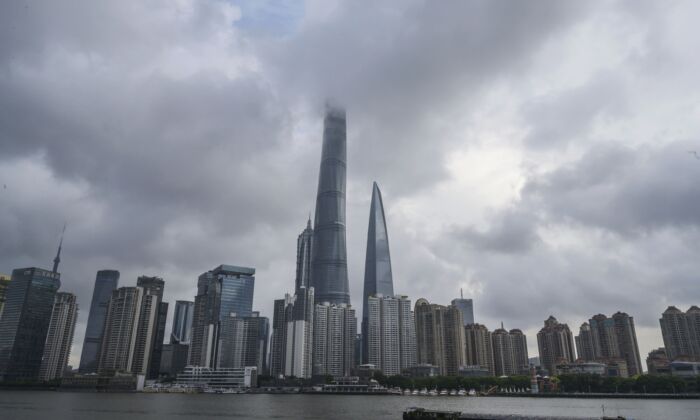 A boat travels on the Huangpu River as the skyline of the city is seen, including the Shanghai Tower, in Shanghai, China, on Aug. 28, 2020. (Kevin Frayer/Getty Images)
Thinking About China

China’s state-owned enterprises (SOEs) are coming to Russia’s rescue. Beijing is pressuring SOEs to purchase goods from Russian companies and to make investments in Russian enterprises.

As sanctions take hold against Russia, companies in the United States, the United Kingdom, and Europe have been dumping Russian assets. China views this as a buying opportunity.

“Some Chinese investors believe that Russia now has no one else to turn to but China. So they believe that China stands to gain from its trade with Russia,” said Hao Hong, managing director and head of research at BOCOM International.

Regardless, Russia desperately needs a partnership with China. Economic reparations will be demanded at the end of this war from Russia, which is already accused of war crimes.

According to the Brookings Institute, Russia has “about $350 billion in available reserves mostly held by France (12%), Germany (10%), Japan (10%) and the U.S. (7%), with the rest scattered among many other countries.”

It will be very hard for Russia to withdraw any reserves from Western markets and central banks until sanctions are lifted, and nearly impossible to move funds if Russia is found guilty of committing war crimes.

There are other strategies at play. In a March 14 op-ed in The Hill, strategists Marc Ross and Michael Keane wrote how Chinese leader Xi Jinping could very well have his sights on Ukraine and Russia for the commodities supply. In theory, if Beijing secures Russia and Ukraine’s commodity supply, then the regime won’t have to worry about a disruption if it invades Taiwan.

Beijing could sidestep any economic sanctions, which is important because China receives the majority of its commodities from ocean trade, and there is persistent fear within the Chinese Communist Party (CCP) that an invasion of Taiwan would trigger global trade sanctions, including sanctioning seaborne trade.

“Russia and China have an overlapping strategic interest in taking down the United States, as well as complementary business needs,” Ross and Keane wrote. “China’s simple business model is to buy and import commodities and then to make and sell mass-produced goods, which it exports to the world. In other words, China seeks to import every commodity traded on the Chicago Mercantile Exchange and manufacture every good sold at every retail store in the Mall of America.”

The combined commodity supply alone is in the tens of billions. Ukraine exports numerous raw materials (iron, steel, mining products, agricultural products), corn, sunflower seeds, wheat, rapeseed, barley, and sunflower meal. If Xi officially backs Russia, he would be securing a tremendous commodity flow for the CCP and ensuring that the Russian economy doesn’t collapse from the weight of the international sanctions.

Other countries are with China, too. Countries associated with China’s Belt and Road Initiative (BRI, also known as “One Belt, One Road”) most likely won’t sever ties with Russia.

India, a partner in the BRI, has yet to condemn Russia for the Ukrainian invasion. While New Delhi has long-standing trade relations with Moscow, it’s dependent on Russian manufacturers for India’s defense arsenal. Additionally, India recently purchased oil from Russia, with ABC News reporting on March 18 that “the state-run Indian Oil Corp. bought 3 million barrels of crude oil from Russia earlier this week.”

Apart from economic aid, China could help Russia with defense. China could supply arms to Russia, much like NATO states have supplied Ukraine.

“China probably wants to avoid high-profile or big-ticket arms sales to Russia in the midst of a conflict which would expose Beijing to international sanctions,” Drew Thompson, a former U.S. Defense Department official, told The Associated Press. “Beijing would be more willing to provide spare parts, consumables, ammunition, and dual-use items that don’t contravene sanctions and could fall below the threshold of international reprisals.”

When Russian Finance Minister Anton Siluanov spoke of a Russia–China alliance on March 13, U.S. national security adviser Jake Sullivan warned Beijing of consequences, stating that “there will absolutely be consequences for large-scale sanctions evasion efforts or support to Russia to backfill them.”

Despite the international sanctions and condemnation of Russia, Chinese Foreign Minister Wang Yi said that China–Russia ties are as strong as ever.

The International Court of Justice (ICJ) in The Hague ruled on March 16 that Russia “shall immediately suspend the military operations” in Ukraine. China’s representative, Judge Xue Hanqin, dissented against the ruling.

President Joe Biden and Xi had a video call on March 18 and little was said of Russia. But according to a statement from China’s Ministry of Foreign Affairs, Xi expressed his belief that these conflicts are in no one’s best interest.

As it stands, it seems the regime in Beijing doesn’t wish to become directly involved in the Ukraine crisis, nor does it want to help Moscow evade sanctions, but China does wish to remain a competitive contender.