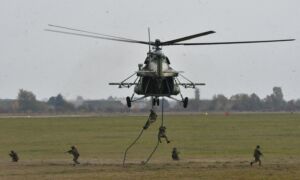 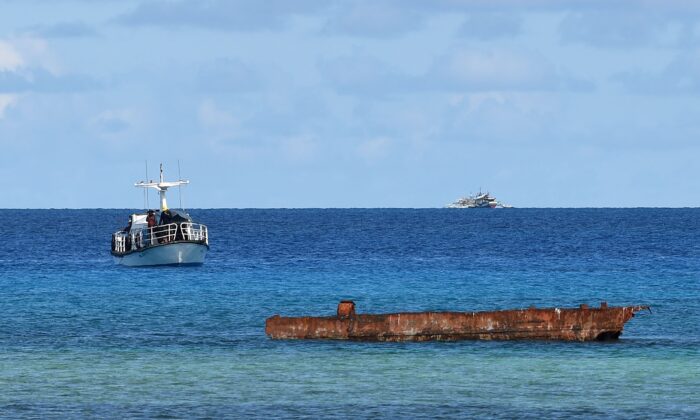 A research boat (L) and Filipino fishing boat (back R) anchored near Thitu island in the disputed Spratly islands of the South China Sea on April 21, 2017. (TED ALJIBE/AFP via Getty Images)
Chinese Regime

Japan said that China maneuvered its largest destroyer into the Sea of Japan on March 18 and 19. Although the ship didn’t enter Japanese territorial waters, it is the first time that Beijing has made its presence known in the Sea of Japan.

Japan’s defense ministry said on March 19 that it was monitoring the vessel’s route to analyze the purpose of the cruise.

Then, on March 21, the Philippines demanded that around 220 Chinese fishing boats, which have moored for two weeks, leave a South China Sea reef claimed by Manila.

“We call on the Chinese to stop this incursion and immediately recall these boats violating our maritime rights and encroaching into our sovereign territory,” Filipino Defense Secretary Delfin Lorenzana said in a statement on Sunday. He added that the presence of the flotilla was a “provocative action of militarizing the area.”

U.S.-based China Affairs commentator Tang Jingyuan said of the two incidents on March 21, “I think the Chinese regime is showing muscle in the Sea of Japan and trying to occupy the reef in the South China Sea.”

The Philippines sees the Chinese vessels as “maritime militia vessels.”

A Filipino government task force said late March 20 that the 220 Chinese boats have been seen on the disputed Whitsun Reef of the Spratly Islands since March 7, and that they believed the fishermen on these boats are Chinese maritime militia personnels.

The same day, Filipino media Manila Bulletin posted a series of photos on Twitter showing the Chinese fishing boats moored side by side.

The Whitsun reef is located in one of the most hotly contested areas, and is surrounded by Philippines, Vietnam, Brunei, Malaysia, and China.

Locsin also posted: “So recommended by General Esperon this noon by WhatsApp. I got the coordinates, so to speak. And relayed to my legal artillery, ‘Fire at will.’ Shell should be flying at first light. I don’t usually announce maneuvers but it seems everybody is baring his chest.”

China’s foreign ministry has not responded to questions about the exchange with the Philippines.

In recent years, Taiwan, Indonesia, Vietnam, and Philippines have reported on Chinese fishing boats moored around disputed islands in the South China Sea. In some cases, such as the Scarborough Shoal standoff, China started a land reclamation project, taking control of the island after sending its fishing boats.

Tang told The Epoch Times that the Chinese regime could be planning to use the same strategy to occupy Whitsun Reef.

“It’s clear that there is a force behind the fishing boats. Otherwise, the fishermen wouldn’t moor there side by side without fishing for two weeks,” Tang said. “From the experiences in recent years, the backing force of this action is Chinese government. This is for sure. Its purpose is occupying the reef and changing the South China Sea from the current open ocean to China’s inland seas.”

The Chinese Navy’s state-of-the-art warship that entered the Sea of Japan is the Renhai-class cruiser or Type 055 missile destroyer Nanchang. It was accompanied by two vessels, the Type 052D destroyer Chengdu and the Type 054A frigate Daqing.

Chinese state-run Xinhua-affiliated media Cankao Xiaoxi, translated as Reference News, reported that the U.S.-Japan meeting during which China was discussed could have been a possible reason why the destroyer group passed the Tsushima Strait between Korea and Japan and navigated northward just days later.

The Type 055 destroyer is the world’s largest surface combatant vessel in service. It is 180 meters long with a beam of 20 meters, and a draft of 6.6 meters, according to Naval News. The full load displacement of a Type 055 destroyer is 12,000 to 13,000 metric tons, which is heavier than the U.S. Navy’s Ticonderoga-class cruiser and Arleigh Burke-class destroyer—both of which stand at about 9,800 metric tons.

China claims that the Type 055 destroyer has anti-aircraft, anti-missile, anti-ship, and anti-submarine combat capabilities. China has two Type 055 destroyers in service—Nanchang and Lhasa. Six more are being manufactured, and eight others are in the pipeline to be built.