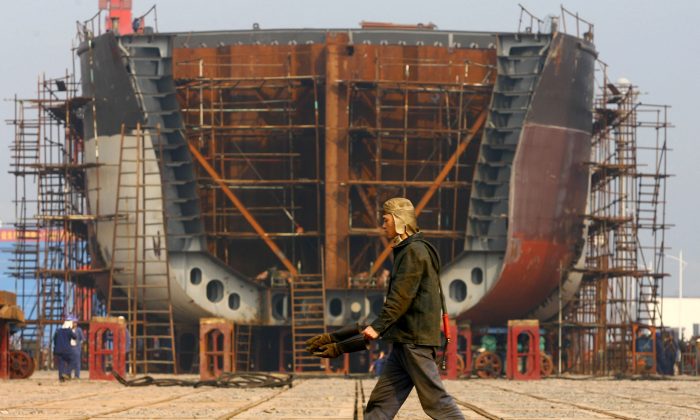 A worker walks the giant hulk of a ship being built at a state-owned company dock in Chongqing on Feb. 12, 2009. (China Photos/Getty Images)
China

Should China’s state-owned enterprises (SOEs) be privatized, have mixed ownership, or remain state-owned? These are some of the questions that have been tossed back and forth for several years. An ambivalent document titled “Guidance on Deepening the Reform of State-Owned Enterprises” has finally been issued by the Central Committee of the Chinese Communist Party and the State Council.

Some analysts of the document say the objective of the SOE reform proposal is to expand and strengthen SOEs. Others say the government wants to promote SOE privatization based on a free market economy.

The reason for the differing interpretations can be found in the conflicting statements contained in the reform plan.

However, Article II of the proposal goes on to say, “Public ownership is still the dominant position. It represents the basic economic system and is the focus of the strengthening and development. The nonpublic economy holds a subordinate position.”

It follows that “mixed ownership” means that private enterprises can buy shares in SOEs and become shareholders. However, the bulk of SOE equity consists of state-owned capital. Private enterprises are only in a subordinate position; they do not have decision-making power.

In order to avoid misunderstandings, after the reform plan was published, state-run Xinhua News Agency published an article titled, “We Must Unequivocally Oppose Privatization.”

The second most important point in the reform plan is to train SOEs in “market-oriented operation mechanisms” and “strengthen the Party’s leadership.”

The document mentions market-orientation 14 times, giving the impression that it is the main theme.

“The Party fully plays the role of the political core of the SOE. … Clarify the legal status of the Party in the corporate leadership structure of the SOE.”

“The Party governs everything” was the political and economic orientation under Mao. General Secretary Zhao Ziyang made painstaking efforts to separate politics and business and to end the party’s control of enterprises. But all these efforts were swept away after the 1989 Tiananmen incident.

The third point in the reform plan states that private enterprises with “great development and growth potential” will also be main targets of reform.

Article XVIII of the proposal states: “Encourage state-owned capital to invest in private enterprises in various ways … through the market-oriented approach, making equity investments in private enterprises with great development and growth potential in key areas, such as public services, high-tech, environmental protection, and strategic industries.”

In other words, if you are a private enterprise with a poor outlook, rest assured, the SOEs will not patronize you. But if you are a business with good profits and market prospects, the SOEs will show up at your door without an invitation. They will want to acquire part of your business, and you cannot prevent it.

What kind of enterprises a government supports reflects the focus of its interests. In democratic countries employment is generally the primary consideration.

According to official data, China’s private sector employment opportunities have long surpassed those of SOEs. Now, with the withdrawal of foreign capital, the government should encourage the development of the private sector and make the employment rate a major consideration.

Why, then, do Chinese authorities want to expand and strengthen SOEs, which provide less employment?

For one, along with the economic downturn, the Chinese government is facing great financial difficulties. According to 2012 official data, the private sector accounted for only 13 percent of tax revenue, while SOEs accounted for 70.3 percent. With existing tax sources depleting, and SOEs being a pillar of public finance, this is enough reason for the state to support them.

Secondly, the reform plan states that the ultimate overall goal is to go to market. SOEs currently have very high debt ratios. The source of debt is mainly state-owned banks. This relationship determines if SOEs are not doing well, state-owned banks will collapse. In the past 20 years, the main approach for SOEs to turn around has been to have them listed on the market to attract funding.

But this approached turned out to be ineffective this year. So the reform plan had another tactic: let SOEs and private enterprises have mixed ownership and “promote going to market overall.”

Do private businesses want mixed ownership with SOEs? Chinese society has been familiar with the concept of mixed ownership since 2014. But private enterprises have no enthusiasm for it.

Wanda Group Chairman, Wang Jianlin, once told Sina: “In a mixed ownership, private enterprise must control the shares, or at least have relative control. … If SOEs are in control, does it mean I provide money to help the SOEs? What’s wrong with me? I cannot do this.”

It is very obvious that private enterprises do not want mixed ownership. But the government is determined to mix ownership.

To calm private business owners and assure them that the government won’t swallow them up, article XVI of the reform plan states: “The reform must be based on laws and regulations, strict procedures, and be open and fair so as to protect the rights and benefits of every investor in the mixed ownership and to prevent loss of state assets.”

The problem is that the Chinese regime has always used the law as a tool to restrict people. Private entrepreneurs all understand the meaning of “keeping public ownership in the dominant position” and “preventing loss of state assets.”

We shall see if any successful private enterprises can avoid being swallowed up by their state-owned counterparts.