WATCH: This is How You Reject a CCTV Reporter in Hong Kong
0
Share Now
TelegramFacebookTweetEmailTellMeWeReddit
Copy Link 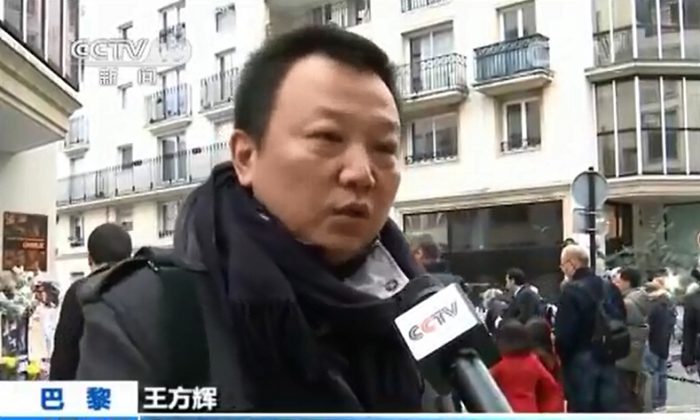 Wang Fanghui, a Chinese national living in Paris, speaks to CCTV. The broadcaster was later attacked for what appears to be its fabrication of the premise of the interview. (CCTV.com)
Epoch China Blog

China Central Television, the official mouthpiece of the Chinese state, is the kind of broadcaster that many Chinese people love to hate.

These feelings were given a new outlet recently, after CCTV propagated a report with a fabricated premise, related to a Chinese national who first encountered the Charlie Hebdo attackers.

Wang Fanghui was in his office when the two men barged in, balaclavas covering their faces, clad in black, wearing bullet proof vests, wielding AK-47s. They told him to squat down. They said they wouldn’t hurt him, and one of them fired a bullet through the window.

The other attacker then called for the shooter, and the two moved down the hall to the office of Charlie Hebdo—where they commenced their massacre.

Wang was initially reluctant to speak with media, but accepted an interview with TF1, the largest television station in France on Jan. 8, the day after the attack.

“My heart was still throbbing with fear. However, being a media worker myself, I know the public has a right to know. The first gunshot was fired in my presence. I could hardly justify not bearing witness to that,” he wrote in an email to a reporter with Caixin, a well-known business publication in China.

“The guy from the TV station said they could blur my face with mosaic and even change my voice if I wanted. I said there was no need. I put my fears behind when I decided to step up and take the interview.”

But his interview with CCTV was handled slightly differently.

The CCTV report, according to a friend who told Wang about it after seeing it live, “says you are a coward!”

Wang says he wandered over to the television to take in the report.

“I was shocked and stupefied. I remember giving her a different answer, but why is she lying?”

CCTV’s report made the claim that Wang was only willing to speak to them—they said it was the first time he had spoken of his experience, which was untrue—after the two gunmen had been killed.

The news presenter on the program intones: “Previous to this interview, he never wanted to appear on the media. Only after the two Kouachi brothers were shot and killed did he become willing to speak. He described some things that had never appeared in the media before.”

The reporter says, as she is walking toward the camera: “His office is next to the office of Charlie Hebdo. Before now, he was very opposed to appearing in the media. Our interview with him is an exclusive.”

Part of his email to the Caixin reporter says:

“My friends in France who knew what happened were angered. They knew what it meant for me personally to face the media one day after having a gun pointed at my head. But everything turned out wrong in the CCTV program.

“They also emailed me some Chinese newspaper reports about the CCTV program and they all said I was able to put my fears behind me and talk to the CCTV after the killers died.

“But the reporter’s upside-down remark has left my attempt in ruins and hurt my reputation. To say the least, it was a stab to an open wound.

“I simply don’t understand why a journalist would have called white black when faced with the facts. Besides, the sentences she added were trivial and had nothing to do with the point of the news.

“Zhang Jin, buddy, you are also a media worker. Why did she make up the words she said? Do you have any idea?”

Caixin, which carried a report on Wang’s reaction to CCTV fabulating, said its article on the topic “has received more reader comments than any story we have ever published.”

Reader comments include: “The mightier a state news agency is, the more likely its reporters are to act like film directors and script writers.” Another says: “Adding highly colored details is what they do.”

Another reader asked: “Where is the credibility in this wanton fabrication of interview content? Are Chinese news reporters all pathological liars?”

Caixin’s reporter, Zhang Jin, writes in his blog: “Wang wrote to me in hopes that I might explain to him why the CCTV reporter who interviewed him would have put words in his mouth. I cannot. I don’t have the answer either.”