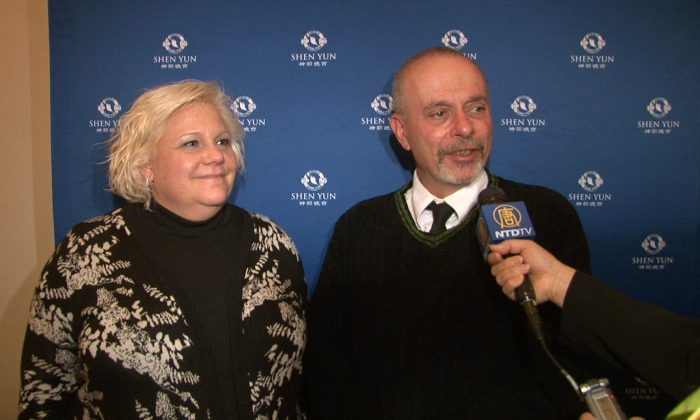 Bob Denton, a geologist, speaks about his experience of watching Shen Yun at the Kennedy Center in Washington, D.C., on April 24, 2015. (Lisa Fan/Epoch Times)

One of Shen Yun’s missions is to revive traditional Chinese culture through music and dance.

The company’s website says, “Throughout history, almost every culture looked toward the divine for inspiration. Art was meant to uplift, bringing joy to both the people who created and experienced it.”

Harriet Igel, a retired therapist, said, “As Americans, we only hear about communism, and about what’s going on now, as opposed to the ancient Chinese forms of culture that [Shen Yun] is showing us.”

Paul Schleicher, a computer engineer, said the last piece that showed a Buddha coming down from the heavens to divert tragedies taking place on earth was very moving.

“Acknowledging that there’s a presence looking over us, and you need to atone for your actions, … You can definitely relate to what they were saying,” he said.

Ernesto Gumbs, a captain in the U.S. army, said the message he took away was something he thought a lot of Americans could relate to.

“One of the common values [in Shen Yun], if you don’t hold true to belief and hold true to who you are, and true to your culture or true to what you believe, then your foundation will be crumbled by any type of lies or deceit,” he said.