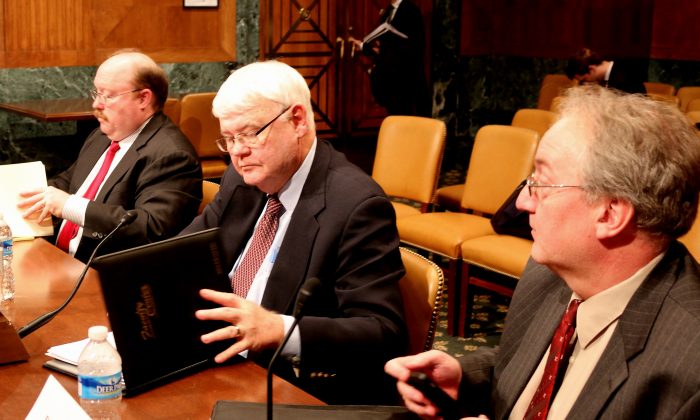 WASHINGTON—The Chinese space program is driven by military objectives, and is part of an effort to displace the United States from its role of global leadership, say experts.

In contrast to the Chinese program, the U.S. space program has been primarily civilian in nature. The United States’ Apollo mission ranks as the most successful noncombatant space program. It was carried out by the National Aeronautics and Space Administration (NASA). Conceived as a civilian project, the aim was to contribute to science and space exploration.

“China’s space endeavors are subordinate to the PLA,” he added.

Communist China’s combat intentions in its manned space program was revealed in the first Shenzhou-5 mission in 2005, according to Fisher. His written testimony states, “Astronaut Yang Liwei shared his ship with two optical surveillance cameras.”

China’s new leadership has escaped attention regarding its plans for exploiting space technology for military advantage, but it too sees space as the domain for warfare.

There is evidence that Chinese Communist Party (CCP) Secretary General Xi Jinping has “personally ordered services of the PLA to prepare for space combat,” said Fisher, based on a speech he gave on Dec. 5, 2012 to a military audience. It was not publicized at the time. Xi’s remarks were quoted in a speech in late 2014 by a veteran general that surfaced in a journal article. That reference disappeared soon after.

The motivation behind the space program is to sustain the Chinese Communist Party, and “eventually displace the United States from its position of global leadership,” said Fisher.

Some rather unusual advice was proffered from China experts at a hearing of the U.S.-China Economic and Security Review Commission on “China’s Space and Counterspace Programs, on Feb.18.

One expert seriously suggested that the United States and China consider reaching an accord that if a conflict breaks out between them, neither will interfere with the operation of each other’s satellites. In other words, make space an off-limits “sanctuary” in the event of a conflict. To understand the reasoning behind this recommendation, some background on the space programs of China and the United States is essential.

Chinese doctrine assumes that “fighting and winning modern wars lies in the ability to establish information dominance,” said Dean Cheng, from the Heritage Foundation at the hearing. Information dominance is acquired through gathering and communicating battlefield information while preventing an opponent from doing the same.

The Chinese saw that increasingly the essential data, ranging from meteorological information to weapons guidance and communications, is gathered via satellites, according to Cheng. He cited an influential 2013 Chinese study of the NATO intervention in Kosovo, where “98 percent of precision guided weapons were guided with space-based information.” The Chinese military concluded from their studies of American wars that information dominance is dependent on space dominance.

At the same time, China invested in “counter-space capabilities intended to exploit U.S. military dependence on space, which the Chinese see as a critical U.S. vulnerability,” said Dr. Phillip Saunders, from the National Defense University.

Towards that end, China has developed a number of different anti-satellite weapons. Fisher concluded that “the PLA’s apparent goal is to exercise denial and then dominance in Low Earth Orbit (LEO) and then extend control into the Earth-Moon system.”

In 2013, the Chinese Academy of Sciences said that China conducted a sounding rocket test at high altitudes. Kevin Pollpeter, from the University of California Institute testified that a U.S. government assessment of the test indicated that China’s ASAT [Anti-Satellite] capabilities had expanded, and “could help enable China to threaten satellites such as GPS and communication satellites in medium and high earth orbits.”

Cheng testified that this test constituted a “substantial expansion of the potential threat posed by Chinese anti-satellite capabilities.”

In addition, PLA writings on space issues underscore a preference for “soft kill,” which denies the use of space assets by jamming, blinding, or cyber-attack, over a “hard kill”—a kinetic attack that could produce significant space debris that might affect China’s own satellites, testified Dr. Saunders, who said he was speaking from his own personal research and not officially for the Department of Defense or the Administration.

Further, China has, in its arsenal, directed-energy weapons, including lasers, high-powered microwave, and particle beam weapons for ASAT missions, according to the Office of the U.S. Secretary of Defense. “Lasers at higher power can permanently damage satellites and at a lower levels can temporarily blind the images of a remote sensing satellite,” wrote Pollpeter.

The U.S. is more vulnerable than China to space combat because it has many more satellites that are vital for military operations. The U.S. has established over 500 military and civilian satellites, while China has deployed about 120 satellites, states Fisher’s written testimony.

One response would be to develop a capability to quickly launch replacement satellites to limit the advantages from ASAT attacks. But this approach is not cost-effective.

Although China enjoys a strategic advantage in the current asymmetry in vulnerability in space, Saunders says that Chinese will be catching up and will become more dependent on vulnerable space systems. China is not dependent yet, he said in oral testimony

“Over time, more symmetrical U.S. and Chinese military and civil dependence on space assets may produce more common interests in making space a sanctuary in the event of a conflict,” he said in written testimony. Based on the principle of mutual deterrence, he thought it reasonable for the two countries to come to an agreement “not to interfere with the operations of each other’s civilian and military satellites.”

Fisher said he was skeptical that satellites will become a sanctuary. “Satellites is an attractive combat zone primarily because it offers very high political and psychological impact compared to the cost you pay for in terms of men and materiel…. Today, especially the temptation to attack the American superiority is far too great. I expect it will be used in any near-term conflict, especially should something occur in the South China Sea or Taiwan or the [Senkaku Islands, also known as the Diaoyu Islands].”

It cannot be a kinetic war [in space] because otherwise you inherit a graveyard. You won’t be able to do anything up there.
— Dr. Phillip Saunders, director, Foreign Policy INSS, National Defense University

Saunders responded that the alternative to the sanctuary approach is chaos and the prospect of turning the lower obit into a “graveyard.” He added that the commercial satellites will go down too, and that our economy will suffer greatly, for example, if the GPS stops functioning.

It may very well be that the next war will be in space, “but it cannot be a kinetic war because otherwise you inherit a graveyard. You won’t be able to do anything up there…Sanctuary is not likely to go away quickly because the alternative is worse,” he said.

Several experts referred to the China military’s unawareness or indifference to their contribution to orbital debris. In January 2007, China tested a ground-launched anti-satellite system and destroyed an obsolete weather satellite that resulted in “one of the worst debris generating events in space history,” said Cheng.

“If China does not become more conscious of orbital debris impact on space operations, the reality could be a significant decline in the ability of states to operate in space especially in the low Earth orbit,” said Dr. Handberg. He suggested that the U.S. GPS could be disabled and space exploration severely damaged by the debris.

Warfare seems to dominate the thinking of the Chinese military. Fisher testified that China was among the 22 attendees that came last summer to the 2014 multilateral maritime RIMPAC exercises around Hawaii. The objective was to develop cooperative relationships ensuring the safety of sea lanes and security on the world’s oceans.

“To the shock of the U.S. Navy and its allies…China brought along its own [Electronic Intelligence] ELINT ship to record everybody’s electronic emissions… That simply does not bode well for cooperation in space either,” Fisher testified.