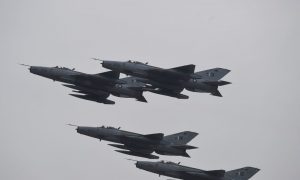 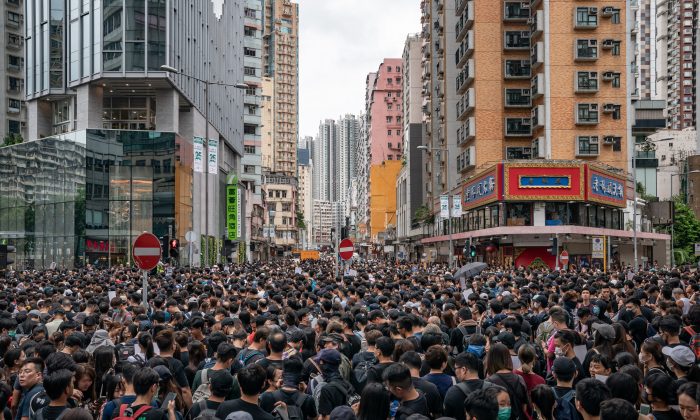 Protesters take part in a march during a demonstration in Hong Kong on Aug. 3, 2019. (Anthony Kwan/Getty Images)
Thinking About China

As the Hong Kong crisis and the trade war escalate, other cracks in China’s communist regime continue to widen

In light of the escalating trade war with the United States, a contracting economy, rising food prices, the global backlash against the Made In China 2025 fiasco, and the Hong Kong protests, the Chinese Communist Party (CCP) faces Soviet-type internal challenges brought about by unbridled corruption and extreme mismanagement within the Party.

For instance, China’s national practice of despoiling farmlands, lakes, rivers and seas on an industrial scale, surpassing even the toxicity of the former Soviet Union, has been going on since the 1950s and continues to this day. As a result, mass desertification and declining food production capacity has made China a food importer since 2007, with the United States supplying the bulk of China’s agricultural and food imports. All of this occurred well before Xi Jinping took power.

Accelerating the Decline of an Empire

The Chinese communist empire–and that’s the most accurate way to view China today—is suffering from the acute deficiencies that come with the long-term policies that are contrary to a sustainable economy, to say nothing of a healthy polity and society. But the CCP has only accelerated the deterioration process.

Under the CCP, conditions in China have gotten worse, not better. Income disparity is higher than ever and massive urban centers, now with more than 50 percent of the population, face underfunded social services and the anger of millions of unpaid factory workers. Conditions in rural areas have deteriorated, too, leading to more urban migration. Additionally, rising ethnic tensions from Muslim populations, as well as in Tibet and other regions, are made worse by the CCP’s failing economic policies and widespread crackdowns on dissent and religious expression.

Externally, the CCP’s aggressive trading posture has resulted in unprecedented tensions with the West and anti-China resentment around the world. This backlash is a major obstacle to China’s much needed access to foreign markets and natural resources. As a result, China’s growth rate has fallen dramatically, from 10 percent down to six percent, probably even lower. Absolute income is also down, while civil unrest incidents and labor strikes are up, hitting at the very heart of what should be Party supporters. The Party is worried about this, as it should be.

CCP’s Policies Offer No Way Out

The big problem is that for Xi, the only way forward is for more repression at home and more aggression abroad. He’s staked his political life on it and can’t change China’s system because he’s a product of it. Opening the Chinese market to the West, therefore, and other forms of openness are unthinkable. The collapse of the Soviet Union in 1991 precludes any thought of reforming the Party or the country. Doing so would loosen the CCP’s totalitarian grip on power and release unstoppable forces that are already present in Hong Kong.

Thus, China’s tremendous repression of precious human resources continues, as does its endemically stratified corruption and market distortions. Unfortunately, given sufficient firepower, a metastasized indifference for one’s fellow man, and most importantly, massive capital and technology injections from the West, these negative conditions can exist for a horrifically long while.

Of course, China under the CCP has been ticking all of those boxes for decades. But even with totalitarian control over all forms of media, manufacturing and finance, and most of all, over its citizens, China is sinking under the weight of its policy contradictions and their consequences.

The bottom line is harsh: the CCP can’t help but fail in its attempts to reverse these trends.

The reason is easy to understand, but hard to take on board if you’re a member of the CCP. Muting dissent, jailing protesters, persecuting religious expression and censoring bad news doesn’t make any of those problems go away. Just as issuing fictitious GDP reports decade after decade, funding redundant construction projects with negative returns via extreme deficit financing just to keep employment at a politically necessary level equate to economic activity.

Devaluing the yuan isn’t the answer, either. It will increase capital flight and the cost of imports. The result is diminishing purchasing power and increasing interest payments of dollar-denominated debt. Those disadvantages will likely outweigh the benefits of lower priced Chinese goods on world market, especially with lower demand from economic slowdown in Europe.

All these actions and events obscure a larger, much more fundamentally damning truth about the CCP’s ability to bring real, sustainable wealth to China: Take away the generously one-sided trade agreements, massive foreign investment, the steady theft of intellectual property and technology from the West, and China will once again be on the verge of collapse, just as it was in 1979.

Hong Kong Is the CCP’s Crisis

Furthermore, Beijing would not be in the world’s spotlight as a titanic aggressor preparing to deal with peaceful protesters with overwhelming military power. Comparisons with Tiananmen Square wouldn’t be made—as they are now—and China’s already sullied reputation wouldn’t have fared any worse.

But regardless of how the crisis is resolved, the imminent threat of Beijing’s lawless domination has cast a dark shadow over the city-state’s future as a reliable and safe financial center for the world. Now that the world sees the constant threat to Hong Kong that China poses, its security as a place of business will always be in doubt.

The Hong Kong crisis is simply the most evident symptom of China’s systemic and parasitical malaise under the CCP.

Historical comparisons aren’t always correct, but they’re not always wrong, either. Hong Kong may well become Beijing’s version of the tiny Polish Solidarity movement of the 1980s that the Russians could have crushed, but didn’t. They feared doing so would foment rebellion elsewhere, as well as economic punishment from the West. The USSR was already crippled by many of the same challenges failures that China faces today.

Ultimately, the Solidarity movement led to the rapid demise of the Soviet Union. It could be convincingly argued that Solidarity was a terminal inflection point for the Soviet Union, and that whichever way they chose to handle it, the outcome would have been the same.

All That Is Repressed, Returns

Today, even with all its development and economic growth over the past four decades, China still finds itself with a very bad case of “Soviet Disease.” Its “Sovietized” condition is certainly not identical to Russia’s former empire, but it is in one crucial respect: it isn’t reversible with the Party remaining in power.

And most importantly, the CCP’s extreme suppression isn’t the answer, but it might lead to it. Sigmund Freud, the eminent psychologist of the 20th century, noted that the no matter the form or duration of oppression, that which is repressed always returns. This basic truth applies to the suppression of human beings and economic laws as well. To put it in Chinese terms, when things reach an extreme, they must move in the opposite direction.

The CCP’s oppression of the freedom, economic welfare, and indeed, the very humanity of its own people can’t and won’t last forever. That which is repressed will, one day, return.