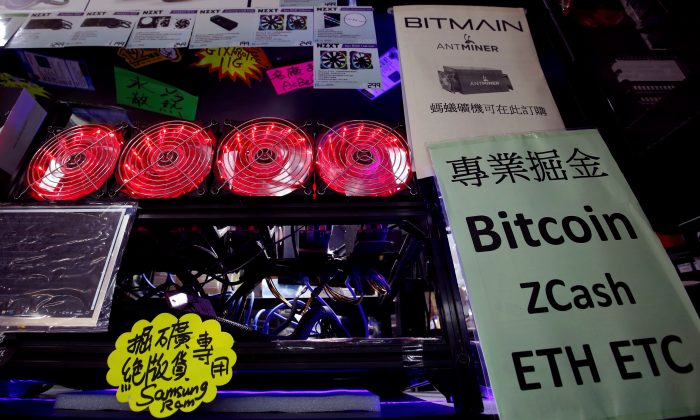 A cryptocurrency mining computer equipped with cooling fans is displayed at a computer mall in Hong Kong, China on May 17, 2018. (Bobby Yip/Reuters)
Thinking About China

China’s Sovereign Cryptocurrency: A Pipe Dream or a Draconian Movement Toward Totalitarianism?

A number of articles have claimed that China is the first country to launch a sovereign cryptocurrency, but this is not exactly true.

Money has three uses: as a medium of exchange, a store of value, and a unit of accounts. If an asset cannot be used to make purchases, stored in a savings account, or priced in goods and services, it is not money. China’s digital currency electronic payment (DCEP) or the digital yuan does not currently meet the above definition of money, although it seems the regime is keen on elevating the digital yuan’s status to that of currency.

Initially, a test rollout was done for the digital yuan earlier this year, with a limited number of merchants and citizens participating. Products were bought and sold in digital yuan for a very brief period until the central government prohibited businesses from transacting in digital yuan. Since then, the central bank has made it illegal for banks to accept savings deposits in cryptocurrencies. Additionally, the central bank is claiming that DCEP is not for speculation, like Bitcoin. To date, no foreign countries have added digital yuan to their foreign currency reserve holdings.

Since 2014, the People’s Bank of China’s (PBOC) digital currency research institute has been working on a DCEP or digital Chinese yuan (DCNY), also called central bank digital currency (CBDC) or e-CNY. While it was originally intended to be used to pay for goods and services, the central government is now saying that cryptocurrencies can only be used as investment assets.

It is expected that the regime is targeting the 2020 Winter Olympics for the real implementation of the digital yuan as a currency used for transactions. Unlike Bitcoin and other cryptocurrencies which must be traded on a platform, PBOC said that initially the digital yuan would be used on existing payment platforms WeChat and Alipay, which currently account for 90 percent of the country’s e-commerce.

A digital yuan virtual wallet can be linked with a bank account and payments can be made without an internet connection, simply by touching two phones together. WeChat and Alipay must also be linked to a bank account, so the only advantage to consumers seems to be the ability to use DCEP without the internet.

The regime claims that the digital yuan will be more anonymous than other cryptocurrencies because vendors will not be able to obtain or share user data. But the state would, as the digital yuan will be directly managed by the PBOC. Rather than blockchain technology, the digital yuan relies on a centralized ledger. Consequently, the PBOC would have complete control. This would allow the regime to maintain a firm grasp on the monetary system. Additionally, regulatory authorities will be able to track and scrutinize payments more easily and at a much deeper level than they can with current electronic payment systems.

The Chinese Communist Party (CCP) feels that the digital currency will help to modernize the financial system while reducing illegal activity. The regime doesn’t want Bitcoin, Libra, or other cryptocurrencies in the country because some of them are American or backed by the U.S. dollar, and none are linked to the yuan. Consequently, the CCP feels it would lose control over its currency.

While PBOC is working diligently to make its cryptocurrency a reality, the CCP is also cracking down on all other forms of cryptocurrency. In 2019, the regime blocked all access to domestic and foreign cryptocurrency exchanges and websites. In May 2021, the regime banned financial institutions from doing cryptocurrency business. Crypto exchanges and initial offerings have also been banned. Banks are even prohibited from offering savings services for cryptocurrencies. This year, the authorities shut down 90 percent of the country’s Bitcoin mining capacity.

It is believed that by taking these measures, the CCP wishes to increase financial stability and gain control over capital allocation, as mining cryptocurrency was draining resources. Furthermore, it wishes to improve the effectiveness of its monetary policy, which could be diluted in the face of competing currencies. Ultimately, the regime hopes that the digital yuan will help expedite the internationalization of the yuan.

The CCP would like international merchants to use the digital yuan for cross-border payments. Currently, the world does approximately $19 trillion of trade each year, using cross-border payments. But the CCP wants the world to use the yuan instead of the dollar. At present, in spite of China being the world’s largest exporter and one of the world’s largest trading nations, the yuan accounts for only 1.88 percent of global payments and only 1.95 percent of the reserve currencies held in central banks around the world. It seems unlikely that foreign nations would be more willing to hold digital yuan, rather than hard currency.

The benefits of the digital yuan seem to favor the CCP regime, rather than the Chinese people. Laws preventing capital flight limit Chinese citizens to converting $50,000 worth of yuan into U.S. dollars each year. Foreign cryptocurrencies were one of the ways that people found to get around this rule. With bans on foreign cryptocurrency activity and strict controls on the digital yuan, this option would no longer exist.

Additionally, the regime would benefit from the vast amounts of transaction and savings data it could collect on citizens and companies through the digital yuan. In the past, the CCP was dependent on third-party technology firms to gather and analyze similar data. With the digital yuan, the regime would no longer need to rely on these third parties. The data gathering would be automatic and in-house.

There is speculation that the social credit system will also be somehow linked to the digital yuan, making it easier for the CCP to punish those who violate its rules or edicts, including speaking out on social media.

If the digital yuan comes to fruition, it may become part of an even more draconian social control system than the one already implemented by the CCP. Those disloyal to the regime could have their accounts frozen. Those making payments to anyone the regime disapproves of could also feel the wrath of the CCP.

On the international front, the purpose of the digital yuan would be to displace the U.S. dollar in international commerce and in central bank reserves. This seems a long way off. And given the slow uptake of the paper yuan as an international currency, it seems unlikely. On the other hand, if China’s trading partners, such as North Korea, Iran, Cambodia, and possibly Afghanistan agree to use the digital yuan, it could be used to circumvent sanctions.