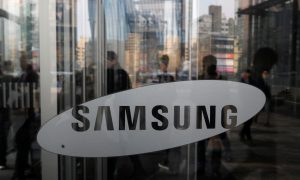 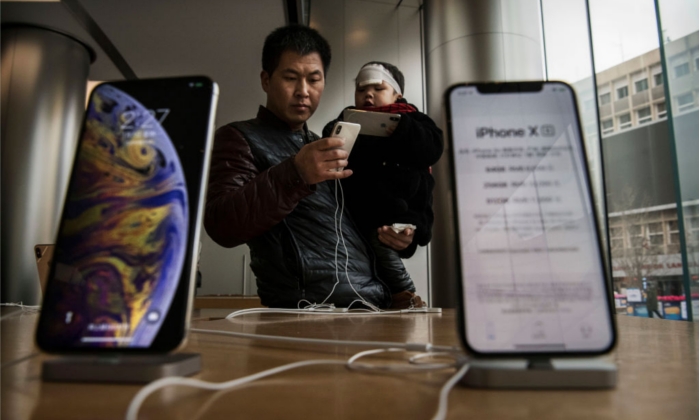 A Chinese man holds his son as they look at iPhones on display at an Apple Store on Jan. 7 in Beijing. (Kevin Frayer/Getty Images)
China Business & Economy

China’s Smartphone Market in 2018 Is a Year the ‘Industry Will Want to Forget’: Report

China experienced an 11 percent fall in smartphone shipments in 2018, according to a Jan. 24 report released by Strategy Analytics.

The slowing economy in China, plus increased competition from major suppliers, has not only put pressure on Chinese companies, but also foreign companies like Apple and Samsung.

“The Chinese smartphone market is in recession and has declined for five consecutive quarters,” said to Yiwen Wu, a senior analyst at Strategy Analytics. “The past year has been exceptionally tough and one the smartphone industry will want to forget.”

Wu attributed this to the overall economic situation facing Chinese consumers. “The smartphone market is suffering from longer replacement cycles and weak consumer spending.”Not only did shipments decrease by 11 percent over a one-year period, they also decreased by 11 percent in the last two Q4 cycles, Wu said. Total shipments in 2018 came to 408.5 million units, while fourth-quarter shipments dropped by about 15 million units to 107.9 million.

Apple has also experienced difficulty recently in China with its flagship iPhone. “Apple has been under pressure in China for the past three years. Ongoing patent battles with Qualcomm are a distraction, while Apple is being heavily criticized for its expensive retail prices,” said Linda Sui, a director at Strategy Analytics.

The new iPhone XS Max is priced at nearly 10,000 Yuan (about USD$1500), according to Apple’s website. “Apple is in danger of pricing the iPhone out of China,” said Sui. Over the last three years, iPhone shipments have fallen in eight quarters.

Apple’s CEO Tim Cook said the company’s revenue drop likely came from their decrease in the Chinese market. Chinese brands like Huawei and Xiaomi are competing more with Apple for a slice of the smartphone pie.

Others have also commented that iPhone’s high pricing may be a cause for its decrease in market share. Daniel Ives, a Wedbush Securities analyst, told The Associated Press that he believed Apple erred by continuing to offer expensive phones in China, giving an opportunity for competitors to produce cheaper alternatives that functioned similarly.

Another potential reason is ideological fervor in mainland China. After the arrest of Huawei’s CFO, Meng Wanzhou, several major Chinese companies have punished their employees for using Apple products, while giving discounts for Huawei devices.

According a Dec. 7 notice from a Chinese LCD maker’s website, “If employees buy any iPhones, they will be punished with a 100 percent penalty on the basis of the phone’s market price.” Conversely, “if they buy a Huawei or ZTE cellphone, the company will provide a 15 percent subsidy, based on the market price.”

Samsung also has stepped back in the Chinese market. Samsung, which is the world’s largest cellphone supplier, has shut down a factory in Tianjin, a major Chinese metropolis. The factory employed 2,600 people and produced about 36 million phones every year. Another factory is still in operation in Huizhou, a southern Chinese city in Guangdong Province.

Greg Roh, a senior analyst at Hyundai Motor Securities, told Reuters that Samsung could leave China. “Samsung doesn’t need to stay in China because of rising labor cost and its almost non-existent Chinese market share. They can be better off in India and Vietnam.”