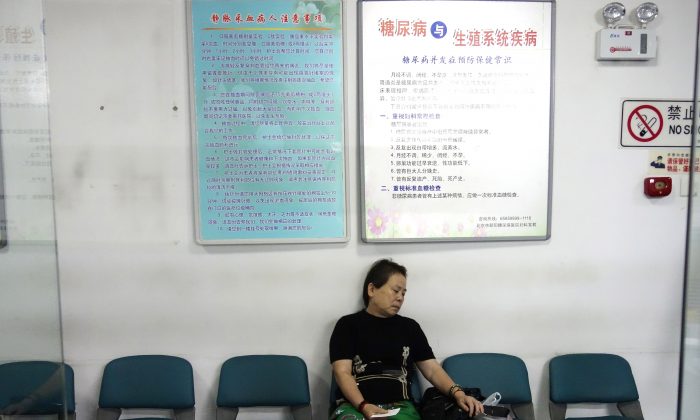 A woman waits to receive treatment as she sits in front of a billboard showing how to avoid diabetes at a diabetes hospital in Beijing on Sep. 4, 2013. Almost 12 percent of adults in China had diabetes in 2010, a slightly higher proportion than in the United States. (Wang Zhao/AFP/Getty Images)
Opinion

Diabetes, which is reaching epidemic proportions in China, is not only having a serious effect on its people’s health, but also on the country’s economy. It is estimated that 92.4 million adults age 20 or older have diabetes, and 148.2 million adults have pre-diabetes, a condition which is a key risk factor for developing overt diabetes and/or cardiovascular disease.

These figures indicate that China has edged ahead of India, and has become the country with the highest population with diabetes in the world. Because of the large number of people affected by diabetes, it is urgent to implement policies to deal effectively with this situation.

There are two types of diabetes: Type 1 and Type 2. In Type 1, which starts in childhood, the body doesn’t produce enough—or sometimes any—insulin because the immune system has destroyed the insulin-producing cells.

Most cases of diabetes are from the so-called Type 2 diabetes. This is a form of the disease that results from insulin resistance, where cells fail to use insulin properly. Sometimes, Type 2 diabetes is combined with a lack of insulin.

The cause of Type 1 diabetes is still unknown, although genetic, viral, and environmental factors could be important in the development of the disease.

On the contrary, Type 2 diabetes has also a genetic component but is closely associated with unhealthy lifestyle, particularly obesity. However, it is important to indicate that although obesity is a significant risk factor for this type of diabetes, not every fat person has Type 2 diabetes and not every Type 2 diabetic person is fat.

Type 2 diabetes now accounts for 90–95 percent of all cases diabetes cases among adults. Of particular significance is the finding that the majority of cases of diabetes are undiagnosed and untreated. Unlike Type 1 diabetes, most cases of Type 2 diabetes can be prevented by leading a healthy lifestyle and avoiding becoming obese.

The diabetes epidemic is not only a serious public health problem, but can also have serious economic repercussions as well. A 2007 study estimated that the medical costs for diabetes and its complications was 18.2 percent of China’s total health expenditures. The World Health Organization (WHO) estimates that diabetes, heart disease, and stroke will cost China approximately $558 billion between 2006 and 2015.

Experts believe that China’s rapid economic development associated with increased urbanization, physical inactivity, unhealthful diet, and obesity are important contributing factors in the development of diabetes. Until just over a decade ago, diabetes was relatively rare in China. However, in the last decade the problem has become much more frequent and has gone hand in hand with dramatic changes in lifestyle.

Environmental toxins may also contribute to recent increases in the rate of Type 2 diabetes. This is the opinion of some experts, who found a positive correlation between the concentration in the urine of bisphenol A, a constituent of some plastics, and the incidence of type 2 diabetes.

Obesity has been found to contribute approximately 55 percent to Type 2 diabetes. A study on the importance of lifestyle factors showed that those who had high levels of physical activity, a healthy diet, did not smoke, and consumed alcohol only in moderation had an 82 percent lower rate of diabetes. When a normal weight was included the rate was 89 percent lower.

The increased rate of childhood obesity between 1960 and 2000 is believed to have led to the increase of Type 2 diabetes in children and adolescents. There were more than 60 million obese people in China, and another 200 million who were overweight, according to a 2004 nationwide survey.

Type 2 diabetes affects approximately 8 percent of adults in the United States. That proportion is increased to 18.3 percent among Americans age 60 and older, according to statistics from the American Diabetes Association. By comparison, the worldwide prevalence of diabetes among all age groups was estimated to be 2.8 percent in 2000, and will rise to 4.4 percent in 2030. At present, the rate of increase of diabetes in China is much faster than in Europe or the United States.

Diabetes and its consequences have become a major public health problem not only in China but also in many industrialized countries as well. To avoid further damage to people’s health, it is urgent to develop and institute national strategies for preventing, detecting, and treating diabetes in the general population. Education and prevention, however, continue to be the best and least costly strategies for dealing with this disease.