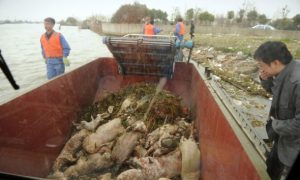 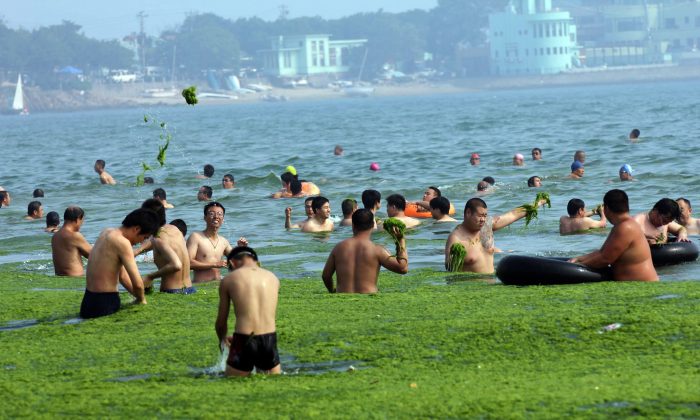 Chinese beachgoers play at an algae-covered public beach in Qingdao City, Shandong Province on July 4, 2013. The seas off China have been hit by their largest ever growth of algae, ocean officials said, with vast waves of green growth washing onto the shores of the Yellow Sea. (STR/AFP/Getty Images)
China

Bright green algae has inundated a Chinese beach in Qingdao, a coastal city in the eastern Chinese province of Shandong, and other areas.

China’s State Oceanic Administration said that the country’s largest algae bloom yet has invaded the Yellow Sea, with thousands of tons of green algae washing up on coastal shores. The green seaweed, called enteromorpha prolifera, is not poisonous, but can negatively affect the marine ecosystem. When the algae decomposes, it releases toxic hydrogen sulfide gas into the water, which can kill marine life.

So far, more than 20,000 tons of the algae has been removed from the beaches of Qingdao, though it has touched other beaches. The whole bloom is estimated to cover more than 7,500 square miles.

Beachgoers who came down to the shore for a relaxing afternoon don’t count themselves as fans. “I came to the coast planning to swim a bit, but having seen this, I don’t dare get in,” said one young woman interviewed by Reuters.