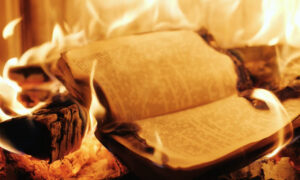 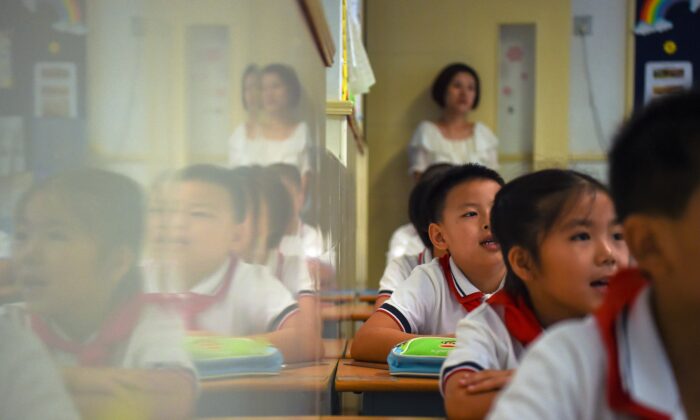 Students sit in a classroom as they study in Shanghai, on Sept. 27, 2017. (Chandan Khanna/AFP via Getty Images)
Thinking About China

In August, Shanghai’s education authorities forbade its elementary schools to give English language final exams. That shocked many Chinese nationals, who see English, and the international access it provides, as critical for the country’s economic development. Many others may see English as their passport out of the country.

The Chinese Communist Party (CCP) has other plans for them, and the Western languages they want to speak. Not only are the population’s language skills being taken away, but increasingly, Chinese citizens cannot get passports and passport renewals.

Chinese nationals should read the writing on the wall, and if possible, emigrate with their families and any wealth they can get out of the country. Of course, many have been doing so for years, especially after the Tiananmen Square massacre of 1989.

Globally, while the number of English speakers, at 1.131 billion, is just marginally greater than that of Mandarin Chinese, at 1.117 billion, a much larger proportion of English speakers have learned it as a second language. French speakers, at 280 million, have an even larger percentage of non-native learners, relative to English. The third most frequently spoken language in the world is Spanish, at 545 million, mostly native speakers.

Over time, the vastly larger number of Western language learners will transform the world into having English as a language for elites in diplomacy and international business. It is already well on its way, including in the European Union, which no longer includes England, and the Shanghai Cooperation Organization, which needs English in order to communicate with its Indian and Pakistani diplomats.

Some might think that on the cusp of globalizing its own influence and power position, the regime in Beijing would strategically educate its citizens in English so they can more easily influence the world’s politics, and extract technology from the world’s universities and businesses.

The New York Times, in a Sept. 9 article by Li Yuan, quoted a nationalistic lawyer in Shanghai who took issue with anti-English policies from a pro-Beijing perspective. “‘When could Chinese stop learning English?’ he asked, then answered his own question: When China becomes a leader in the most advanced technologies and the world needs to follow it. ‘Then,’ he wrote, foreigners ‘can come to learn Chinese.’”

But the regime can get its technology in other ways, for example, through purchase or cybertheft from scientists, academics, and business people globally. These friendly foreigners are typically naive about the CCP’s intentions, and eager to make revenues from any source, including Chinese government officials and businesses. So they leave themselves vulnerable to monetary persuasion and scientific engagement.

Beijing is unresponsive to arguments that China can influence the world through true soft power, which would require opening itself up, transparency, and thus, vulnerability. It would have to drop its shield, including restrictions on sharing Chinese scientific and political information, and open its internet more generally. Its most effective shield against the world is its great firewall. Beijing will not let this down and make itself vulnerable to the resulting politically-educated Chinese public that would then likely become anti-CCP and a threat to Party power.

The risk is too great, especially when the prize is so distant. The world is nowhere near adopting the Maoist model that the regime relies upon for any real soft power. Turning away from mass education in English is therefore not only a necessary, but an acceptable part of the CCP strategy to “protect” and thus better exploit its own citizenry. Shanghai residents, who are the most cosmopolitan in China, will not need English if they stay put, and foreigners are kept out. Beijing thus has no need for Western universities, Korean pop bands, and foreign clothing brands that sell themselves in China. Indeed, all are now under pressure from the regime, which sees them as dangerous luxuries.

The CCP is thus turning against its own population of 1.4 billion, in order to make them a gravitational center for its own power, while sending emissaries out to the world as the CCP spear, in order to extract political, economic, and technological power from other countries. Combined, this shield and spear strategy is the method and source of the CCP’s growing power.

Domestic Chinese companies, which use the Chinese language, are easier to control than are Western companies. By encouraging them to trade with each other, they retain Chinese consumer spending to power Chinese jobs, the economy, and taxation, internally. China is not a small country that much relies on the import of consumer goods, foodstuffs, investment, or infrastructure. It can produce its own, and through an independent economy, protects itself from U.S. and allied sanctions over issues such as human rights.

Fortress China has its own water wells of human labor, and its own food supply of abundant taxes. This fortress mentality of Xi Jinping will not remove the illiberal influence that China can have on the world. Its government officials and “billionaires,” who are gatekeepers in the provision of discretionary and targeted market access in China, or billions of investments outside of it, are still welcome to jet around the world. They can acquire any technologies they need, or exert political influence, including through bribery that is deemed necessary for the expansion of CCP power.

The world is thus the CCP’s oyster, because the CCP has the money to purchase, and the capital, technology, and labor controls necessary to retain at its center, any kind of informational or political power that they require it.

To influence the world, the CCP, therefore, does not need English. It can buy the world’s leaders, just like it buys English translators. China’s shield and spear strategy acquires elites through its monetary capture, which is different than the Western strategy of influencing the population as a whole in order to someday democratize China.

To influence China, we need to access the Chinese people and speak their language. But this Western strategy is useless if the CCP can at the same time shield its population, including through cutting down on English language education.