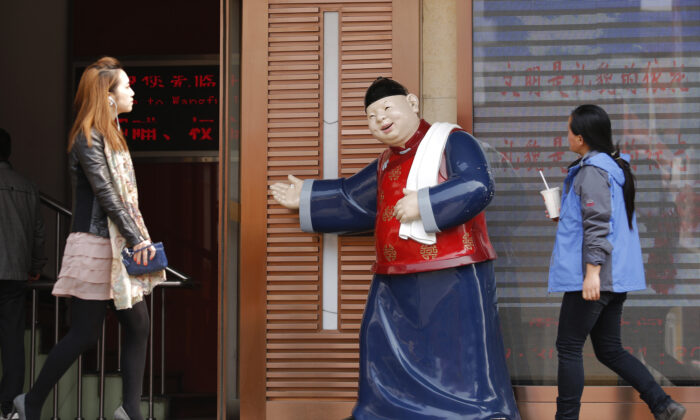 People walk past a statue, placed there to promote a restaurant, at a shopping district in Beijing, China on April 3, 2013. (Kim Kyung-Hoon/Reuters)
By Reuters

BEIJING—China’s services sector expanded at a slower pace in December following a strong rebound in the previous month, with business confidence falling to the second-lowest on record despite a pick-up in new orders, a private survey showed on Jan. 6.

The more downbeat reading suggests services companies remain cautious about the outlook for China’s economy despite a flurry of stimulus measures, signs of improvement in the manufacturing sector and a long-awaited U.S.-China trade deal.

The services sector accounts for more than half of the economy.

The Caixin/Markit services purchasing managers’ index (PMI) slowed to 52.5 last month from 53.5 in November, but was still higher than an 8-month low hit in October.

The index has stayed above the 50-point margin that separates growth from contraction on a monthly basis since late 2005.

The cooling trend in the private survey echoed that in the official non-manufacturing PMI, published by the National Bureau of Statistics, which fell from November’s eight-month high.

Beijing has been counting on a strong services sector to cushion a prolonged slowdown in manufacturing and investment and create jobs for workers laid-off in other areas. Economic growth has cooled to near 30-year lows amid sluggish demand at home and abroad.

“China’s economy is likely to get off to a quick start in 2020, but it will still be constrained by limited demand for the rest of the year,” Zhong Zhengsheng, director of macroeconomic analysis at CEBM Group, wrote in a note accompanying the Caixin PMI release.

Services companies surveyed expressed concerns over subdued economic conditions and a lack of staff, the Caixin survey showed. Their expectations regarding the one-year outlook for business activity fell to the second-lowest level since the series began in 2005.

The pace of job creation was also more modest, with the employment sub-index hitting the lowest level since July. Meanwhile, input costs continued to rise, while firms had to lower their selling prices for the first time in over a year, squeezing companies’ profit margins.

That was despite a faster rise in the volume of new work in December, suggesting some companies were cutting prices to promote sales amid fierce competition.

“It is difficult for the measure of business confidence, which remained at a relatively low level in December, to improve. That has become a major hurdle to stabilizing the economy,” Zhong said.

While domestic demand picked up somewhat in December, new orders from overseas weakened to the worst level in six months, deteriorating notably from November.

Caixin’s composite manufacturing and services PMI, also released on Monday, slowed to 52.6 in December from 53.2 in November.

While the “Phase One” trade deal with the United States, which is expected to be signed on Jan. 15, will ease some of the pressure on exporters by reducing U.S. tariffs, analysts at NatWest markets said a recovery in the manufacturing sector is unlikely to be sustainable if further tariff escalation remains a threat.

“We expect the stronger recovery momentum in the services sector to partially offset the downside risks of the manufacturing sector outlook into 2020,” they wrote in a note.

By Yawen Chen and Kevin Yao