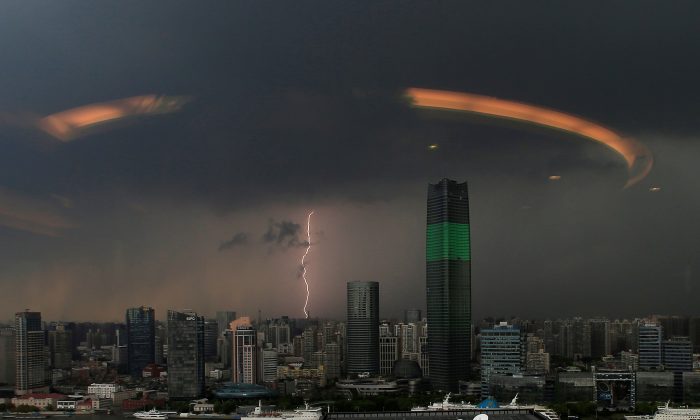 A streak of lightning is seen above the skyline of Shanghai, China on Aug. 19, 2016. (Aly Song/Reuters)
China Business & Economy

BEIJING—China’s services sector and factory activity grew at a slower pace in July, an official survey showed on July 31, heaping pressure on Beijing which is counting on the sector to help weather a sharp hit to its manufacturers and the economy from the Sino-U.S. trade war.

The official non-manufacturing Purchasing Managers’ Index (PMI) fell to 53.7 from 54.2 in June, but stayed well above the 50-point mark that separates growth from contraction.

Services account for more than half of China’s economy, and rising wages have increased Chinese consumers’ spending power in recent years. But the sector softened late last year along with a slowdown in the economy.

China’s factory activity contracted in July for a third month amid a tariff war with Washington and weak domestic demand.

A monthly index released on Wednesday by an industry group, the China Federation of Logistics & Purchasing, stood at 49.7 on a 100-point scale. That was up 0.3 points from the previous month but still below the 50-point mark that shows activity contracting.

China’s economic growth fell to 6.2 percent over a year ago in the quarter ending in June, its lowest level since 1993.

The manufacturing decline “will continue in 2019 until the trade and technology negotiations make some progress,” said Iris Pang of ING in a report.

Chinese leaders have tried to shore up economic activity by pumping money into building highways and other public works. That has supported demand for construction materials but failed to reverse the overall downturn.

The official July composite PMI, which covers both manufacturing and services activity, rose fractionally to 53.1 from June’s 53.0.

By Lusha Zhang and Beijing Monitoring Desk. The Associated Press contributed to this report.