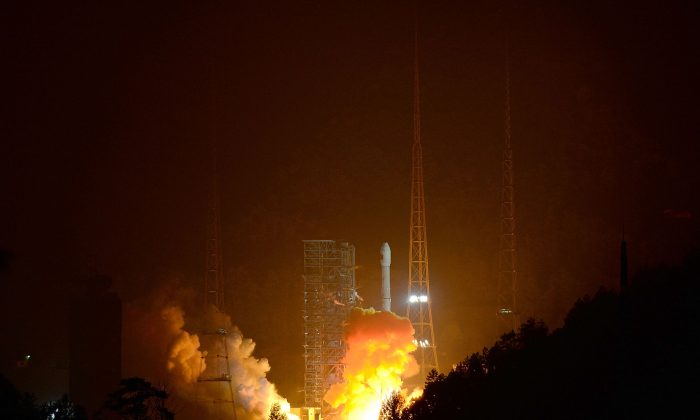 The Pentagon has declared “China possesses the most rapidly maturing space program in the world.” Yet, the nature of recent developments has experts questioning what the Chinese regime’s true intentions are in space.

Among the key issues are the Chinese regime’s experiments with space weapons. It has tested several of these, and has consistently told the public that it was testing something else.

Such programs are of particular concern for the United States. A significant part of modern military power relies on satellites—from GPS and communications, to early warning systems.

The Chinese regime’s development of weapons designed to disable or destroy satellites, the report states, are “inconsistent with China’s public statements about the use of space for peaceful purposes.”

The most notorious of these tests was in January 2007 when the Chinese regime launched a rocket and destroyed one of its own satellites. Today, however, its space weapons have gone far beyond rockets to include directed-energy weapons and satellite jammers.

Its military writings, however, “emphasize the necessity of ‘destroying, damaging, and interfering with the enemy’s reconnaissance … and communications satellites,'” the report states. The statements suggest, it notes, the Chinese regime may be targeting navigation and early warning satellites, for programs “designed to ‘blind and deafen the enemy.'”

The Chinese regime’s thinking is that by destroying or capturing satellites and other sensors, it can “deprive an opponent of initiative on the battlefield and [make it difficult] for them to bring their precision guided weapons into full play.”

While defense experts have warned for years about the Chinese regime’s development of space weapons, the issue is only now reaching the mainstream.

Air Force Space Command recently broke its silence on an episode of “60 Minutes,” which aired on April 26. Adding to the already rare event, it featured top-level U.S. military officers warning of China’s anti-satellite weapons and declaring that the Chinese regime is a military threat.

The development was more significant than it appeared, according to William Triplett, former chief counsel to the Senate Foreign Relations Committee and an expert on national security, who spoke with Epoch Times in a previous interview.

Meanwhile, just weeks prior to the “60 Minutes” piece, on April 14, the same officers including Air Force Lt. Gen. Jay Raymond, warned of the Chinese regime’s space warfare programs during a segment that required security clearance to attend at the Space Symposium in Colorado Springs.

“Soon every satellite in every orbit will be able to be held at risk,” Raymond told the website Breaking Defense.

“What I’m told is the whole China space ASAT [anti-satellite] thing, that really made the rounds,” Triplett told Epoch Times. “I was told it was the hot topic.”

One of the key reasons why the Chinese regime’s anti-satellite programs have U.S. officials concerned is that the programs appear to be targeted at the United States.

The Chinese regime categorizes its anti-satellite weapons with its little-disclosed “Assassin’s Mace” and “Trump Card” weapons. A report from the National Ground Intelligence Center, declassified in 2011, states “These modern Trump Card and Assassin’s Mace weapons will permit China’s low-technology forces to prevail over U.S. high-technology forces in a localized conflict …”

In the case of anti-satellite weapons, they would hypothetically allow the Chinese regime to disable the high-tech U.S. weapons system that its military could not otherwise defeat, which would in turn even the playing field.