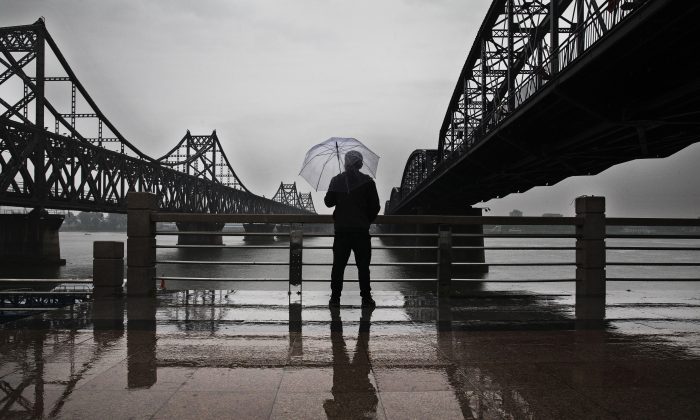 A man looks across the Yalu river in the North Korean city of Sinuiju between the Friendship Bridge (L) and the Broken Bridge that connects the two countries from Dandong, China, on May 23, 2017. (Kevin Frayer/Getty Images)
Chinese Regime

The Epoch Times has recently obtained internal government documents from a trusted source that revealed more information about China’s financial and agricultural aid to North Korea.

Despite the drop in trade between North Korea and China at the beginning of this year due to border closures to prevent the spread of  COVID-19, China is still North Korea’s biggest trading partner, making up 90 percent of its trade volume.

Documents leaked to this publication detailed two projects that were previously undisclosed to the public.

One leaked document, released in 2016 and titled, “Jilin Province Equipment Manufacturing and International Capacity Cooperation Project Library,” shows that the Chinese Communist Party (CCP) has been funding 15 projects in Jilin, the northeastern province bordering North Korea. Aimed at developing North Korea’s economy, most of these projects were documented as “overseas investment” by the Jilin provincial government. Only two cement grinding stations, one in Pyongyang and the other in the Rason Special Economic Zone (SEZ), were considered “contracted projects.”

The cement plant in the Rason SEZ produces 2,500 tons of cement clinker a day, and the other plant in Pyongyang produces 1.2 million tons of cement powder from the cement grinding station. Both have received an investment amount of around 1 billion yuan (about $150 million) from the Jilin provincial government. Yanbian Chengxin Concrete Co. is in charge of the projects.

Another project involves the construction of a 10-kV power distribution network and a 66-kV power transmission and transformation in the Rason SEZ. The Chinese regime has invested $468.6 million yuan (about $69.82 million) in the electrical project. The construction of electric poles for the lines within China has been completed. The project is overseen by Jilin Economic Cooperation Development Investment Co.

The Liuduo Island Free Economic and Trade Cooperation Zone project is located on Liuduo Island, North Korea, opposite the Shatuozi Port in Hunchun city of China. The CCP has invested 31.5 billion yuan (about $470 million) and required bank loans of  200 million yuan (about $29.7 million) for the project. The project is carried out by Hunchun City’s Chunhui Investment Co.

According to a report published by South Korean media Chosun Ilbo on Feb. 20, 2018, the Liuduo Island project started in 2016. The Chinese regime will not directly invest in Liuduo Island, but through Hong Kong companies to push forward the construction of a mutual trade zone. In order to promote the project, Beijing also plans to build a port in Hunchun and repair the bridge connecting Liuduo Island, the report said.

In recent years, many foreign companies that have invested in North Korea have failed. For instance, in 2017, Swiss construction material giant LafargeHolcim sold its 36 percent stake in North Korea’s Sangwon Cement Company at an undisclosed price. However, the CCP has continued to invest in North Korea.

Another internal document obtained by The Epoch Times shows that the CCP exported advanced agricultural technology to North Korea.

The “Foreign Aid Package Project Proposal” compiled by Jilin Jinong High-tech Development Co. on June 5, 2014 mentioned that the project site is in the DPRK-China Co-op Farm in North Korea. The project construction period was from 2015 to 2017. The company is owned by the Jilin government, and funded by the Jilin Academy of Agricultural Sciences.

The total investment in this agriculture project was 9.97 million yuan (about $1.5 million) and provided by the CCP as “aid to the North Korean government,” the document stated. North Korea is responsible for providing construction land and experimental land for the project free of charge, handling land use permit procedures, assisting in the immigration processing for Chinese workers, and providing them with office space and accommodation, the company said.