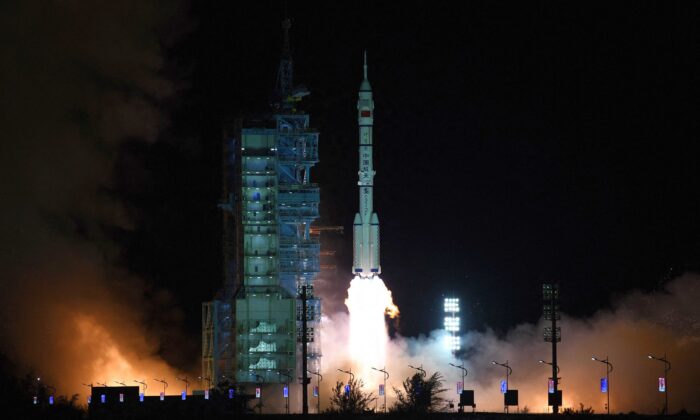 The United States is now behind China in the ability to take down satellites. "The Shijian-21 satellite is a game-changer," said Weichert, who also produces The Weichert Report. "It is a real-world offensive capability that can hunt and destroy American systems and render the U.S. military on earth deaf, dumb, and blind." Picture: A Long March-2F carrier rocket, carrying the Shenzhou-13 spacecraft with the second crew of three astronauts to China's new space station, lifts off from the Jiuquan Satellite Launch Centre in the Gobi desert in northwestern China on Oct. 16, 2021. (STR/AFP via Getty Images)

On Oct. 24, China launched its Shijian-21 into orbit. The satellite, according to China Aerospace Science and Technology Corp., is “tasked with demonstrating technologies to alleviate and neutralize space debris.”

Shijian-21 has a robotic arm that can be used to move space junk—there are more than 100 million pieces of it floating around the earth—or capture, disable, destroy, or otherwise render unusable other nations’ satellites. That arm makes Shijian-21 a “satellite crusher.”

Brandon Weichert, author of “Winning Space: How America Remains a Superpower,” told the Gatestone Institute that the Chinese satellite was launched into geosynchronous orbit, where many of America’s most sensitive satellite systems—those critical to Nuclear Command, Communications, and Control (NC3); surveillance; and military communications—are located.

“Because the U.S. satellites in geosynchronous orbit are so far away from earth, they are both expensive and hard-to-replace,” Weichert said. “Losing any of these systems, with no replacements on hand, would give China’s military an unprecedented advantage in the event of an outbreak of hostilities.”

China has designed its new space station, as Richard Fisher of the International Assessment and Strategy Center tells me, “to incorporate additional large military modules that can be equipped with lasers, microwave, or missile-based anti-satellite systems.”

In September 2008, China’s Shenzhou-7 manned mission came within 45 kilometers of the International Space Station as the Chinese crew was launching a microsatellite, “an obvious simulated ISS-intercept mission,” Fisher said. One of the veterans of that mission, Fisher told Gatestone, is now the commander onboard the Chinese space station.

“They’re going counterspace in a big way,” Vice Chairman of the Joint Chiefs Gen. John Hyten said on Oct. 28 at an event sponsored by the Defense Writers Group.

Hyten, previously commander of the U.S. Air Force Space Command and U.S. Strategic Command, said Chinese military officers “are doing all those things because they saw how the United States has used space for dominant advantage.”

“For many years, Washington has taken its space superiority for granted,” Weichert said.

Complacency is not the only American disease, however. American blindness also had a role. At one time, America was dominant in space, and American political leaders decided to go slow on developing anti-satellite weapons for fear of triggering a competition. With the United States having the most assets in orbit, the reasoning went, the U.S. would have the most to lose in such a race.

That view was the product of a fundamental misunderstanding of Chinese and Russian attitudes. The misunderstanding also directly led to America falling behind in another crucial space technology. The United States was the early leader in hypersonic flight with the X-15 reaching Mach 6.7—6.7 times the speed of sound—in 1967. Now, however, America is about a half-decade behind China. The United States is also trailing Russia.

“We had held back from pursuing military applications for this technology,” Ambassador Robert Wood, U.S. representative to the Conference on Disarmament in Geneva, told Yahoo!

Wood, as described by that site, “implied that U.S. officials had tried to avoid spurring a scramble for hypersonic missiles.”

All that American restraint did was to allow the Chinese and Russian militaries to grab commanding leads in the race to deploy these impossible-to-defend-against delivery systems for nuclear weapons. In late July, Beijing shocked the Pentagon with an orbital test of a hypersonic glide vehicle.

Similarly, America is now behind China in the ability to take down satellites.

“The Shijian-21 satellite is a game-changer,” said Weichert, who also produces The Weichert Report. “It is a real-world offensive capability that can hunt and destroy American systems and render the U.S. military on earth deaf, dumb, and blind.”

Space, of course, is the ultimate strategic high ground, conferring control of the earth. Therefore, American leaders should have known that China would try, as Weichert explained, to build the capabilities “to first knock the Americans out of orbit and then to place their own systems there.”

The United States has the ability to catch up, of course, but big course corrections are necessary. For one thing, American satellites are easy pickings for the Chinese military. As Hyten put it, “We actually put the president in a tough spot because we have a handful of fat juicy targets, while the adversary has built hundreds of targets that are difficult to get after.”

The result, the general said, is that America does not have “a resilient space architecture.”

A resilient architecture, Hyten correctly believes, would be composed of lower-cost surveillance satellites that, in the words of SpaceNews, “can be mass-produced and deployed fast.”

Unfortunately, “the Department of Defense is still unbelievably bureaucratic and slow,” Hyten observed. The Pentagon’s bureaucracy “is just brutal.” So don’t count on the U.S. military, which has taken a decade to design a yet-to-be-launched survivable space network.

Fortunately, there is also Elon Musk, a bureaucracy of one. His company, SpaceX, is building the Starlink constellation of telecommunications satellites in low-earth orbit. When complete, there will be some 42,000 satellites that can be used by the satellite-dependent U.S. military when China has crushed, lasered, shot down, or bumped out of orbit America’s military assets in space.

Of course, China will also try to take down the Starlink constellation too.

Gordon G. Chang
Gordon G. Chang is a distinguished senior fellow at the Gatestone Institute, a member of its Advisory Board, and the author of “The Coming Collapse of China.”
Website

Gatestone Institute
Gatestone Institute, a non-partisan, not-for-profit international policy council, and think tank is dedicated to educating the public about what the mainstream media fails to report in promoting: Institutions of Democracy and the Rule of Law; Human Rights; a free and strong economy; a military capable of ensuring peace at home and in the free world; energy independence; ensuring the public stay informed of threats to our individual liberty, sovereignty and free speech.