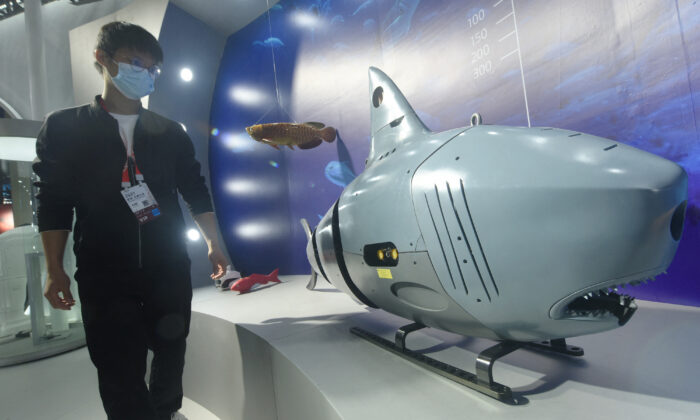 A robotic shark is seen at the Apsara Conference, a cloud computing and artificial intelligence (AI) conference, in Hangzhou, in China's eastern Zhejiang Province on Oct. 19, 2021. (STR/AFP via Getty Images）
Thinking About China

In recent commentaries, I have written a lot about the People’s Liberation Army (PLA) and its efforts to embrace “intelligentized” warfare. These means creating “intelligent weapons” such as autonomous systems, for example, robots. Robotics systems of warfare are basically drones, capable of operating without human controls.

Increasingly, autonomous systems are being considered for any variety of mission or operation once considered to be the sole domain of manned systems. Initially, drones—mostly unmanned aerial vehicles (UAVs)—were used in roles and missions deemed too “dull, dirty, or dangerous” for manned platforms. They have been typically employed for surveillance and reconnaissance over enemy territory.

More and more, autonomous systems are being used to free up manned platforms—such as surface combatants, submarines, or combat aircraft—for combat missions. Aerial drones are more likely to replace combat aircraft in missions where the operation is particularly high-risk or if the use of a manned system might be impractical or politically difficult.

The PLA, as well as other militaries, already use autonomous systems, particularly aerial drones. In addition to UAVs, there is growing interest in using unmanned underwater vehicles (UUVs) and unmanned surface vehicles (USVs). UUVs are typically used for minesweeping, while both UUVs and USVs could possibly fulfil covert intelligence-gathering missions.

Nevertheless, autonomous military systems have their limitations. Most drones—particularly armed UAVs such as China’s Wing Loong or the American Predator—still require a man to be in loop, particularly controlling the launch of an air-to-ground weapon. UUVs are usually either tethered to a surface ship or are preprogramed and, therefore, require little or no autonomic capability.

Unmanned ground vehicles (UGVs) have their own problems. This was pointed out by a recent article in Popular Mechanics that panned China’s latest UGV contraption, a four-legged robotic “yak” that could carry up to 350 pounds and travel at 6.2 miles per hour. Although presented as a civilian gadget, it would presumably have military uses, such as carrying soldiers’ gear.

The article quotes Chinese media sources as boasting that the robo-yak is “the world’s largest, heaviest and most off-road-capable of its kind,” and that it can traverse a variety of terrains, including “steps, trenches, and cliffs, not to mention muddy roads, grasslands, deserts, and snowfields.”

The Popular Mechanics article, however, says that this is all nonsense, and that a video of the robo-yak’s performance has been carefully edited to conceal that it mainly operates on paved or level terrain. It notes that “every time the yak heads toward unpaved terrain, especially terrain strewn with rocks or an unpaved incline, the video cuts away to a new scene.”

If true, then the military usefulness of this robot would be severely restricted. It might tip over on rough terrain or even fall off a cliff.

Another problem is power. UGVs like these utilize electric motors, which requires batteries. Batteries can run out of power quickly, take a long time to recharge (providing there are power sources available in remote environs), or are too heavy to be carried as spares (one could visualize the robo-yak being used simply to carry its own extra batteries). The article notes that this problem with batteries is what has held up U.S. efforts to militarize its own gear-carrying UGVs.

To be sure, robotic vehicles are coming. The PLA already uses UGVs in Tibet, for operations on the Himalayas. One, called Sharp Claw, is equipped with a submachine gun, while another, known as the Mule-200, can carry supplies, weapons, and ammunition. Neither of these systems is autonomous, however; they are controlled remotely by a human.

The PLA leads in the global development, production, use, and export of armed aerial drones, along with the United States and Israel. We should expect to see this dominance continue. Other types of unmanned systems, and particularly those controlled by AI, will likely take much longer.

AI, in fact, is probably much more likely to be used in taskings like intelligence-gathering and processing. For one thing, AI could greatly assist humans when it comes to collecting, processing, and interpreting the large amounts of data being collected by these new and more capable sensors in order to help produce actionable intelligence and aid in decision-making.

AI and quantum computing could provide the immense computing power necessary to interpret large amounts of data coming in from a wide variety of sensors and other resources. AI, along with improved networking, could provide faster sharing of information for improved situational awareness—basically, knowing what is transpiring on the battlefield in near-real time.

AI may eventually give us “Terminator”-like robotic weapons, but not anytime soon. China’s robo-yak is evidence that the PLA has a long ways to go before it can say that it possesses truly autonomous systems.