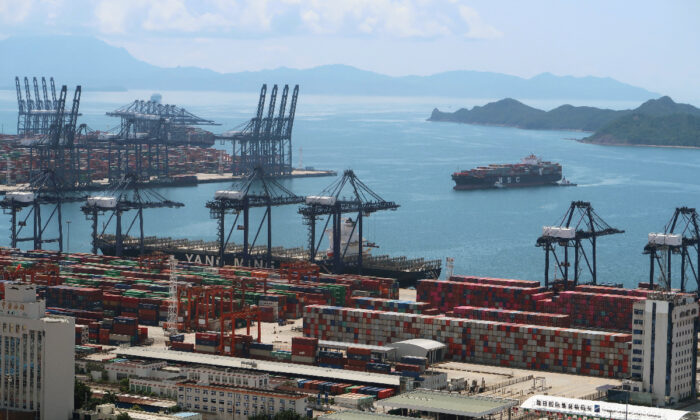 A cargo ship is carrying containers near the Yantian port in Shenzhen, in China's Guangdong Province, on May 17, 2020. (Martin Pollard/Reuters)
Business Columnists

China’s Rise and Inflation’s Fall From 1982 Until COVID

My tour of China with Australian journalists in 1981 concluded with a tour of the Shenzhen Free Trade Zone—which at that stage was little more than a mass of concrete being laid by the Australian company CSR.

If we saw China’s past in Shanghai, with the ludicrous decision of its economic boss—when he “followed the directives of the Central Committee of the Communist Party of China”—to turn heavy industry factories into light industry, then in Shenzhen, we saw China’s future.

Everything we had seen before Shenzhen spelled failure for China’s attempt to industrialize after its disastrous period under Mao Zedong. We visited a commune in Sichuan, for example, which specialized in making furniture. Its members reported impressive sales growth, doubling their output every year. How did they manage, we asked? “We sent out propagandists,” we were told.

Finally, a state-owned warehouse in Shanghai was being ordered to buy the commune’s output. This was, therefore, just another “show commune.” While its output growth looked great, and peasants in other communes could be told to “learn from Qiliyin,” they could never emulate its sales growth because they lacked its captured market. Expansion plans based on that model were bound to fail.

But Shenzhen was different in many ways.

For the by-then weary band of Australian journalists, one welcome change was the absence of any incantation of “the Central Committee of the Communist Party of China.” We had a no-nonsense greeting from the managing director, who then handed over to the zone’s chief architect, who explained what the zone’s objectives were.

Like the many Southeast Asian countries that had beaten China into the export-oriented-industrialization game, the zone targeted demand from American consumers. But this wasn’t enough to guarantee success. Many of those countries had failed to industrialize because the U.S. companies in their free trade zones would decamp to another country as soon as wages started to rise. What set Shenzhen apart was the intelligence with which it planned to attract and capture U.S. companies and U.S. technology.

The crucial difference with Shenzhen was that it had a scheme to stop the American capitalists from playing the footloose game and taking their factories and technology with them when wages rose. Every foreign investor had to have a local partner, and within five years, that local partner had to own 50 percent of the business. Shenzhen didn’t simply intend to find jobs for Chinese workers; it also intended to build a Chinese capitalist class.

We were initially gobsmacked by the scale of local ownership that American capitalists were expected to acquiesce to: 50 percent in just five years, and without the local partner having to cough up any investment funds. American firms could only agree to this proposal—which gave away 50 percent of the profits, as well as the ownership—if the fall in their wage bill was far greater than 50 percent of their existing profits from U.S.-based factories.

The same applied to free trade zones in countries like Malaysia and Indonesia in the 1970s, but 100 percent foreign ownership meant that these same firms would cherry-pick countries. If wages in Malaysian free trade zones rose substantially, they’d simply move production to Indonesia. It wasn’t a recipe for permanent industrialization.

The focus on getting Western technology was also impressive, and this partly reflected the fact that many Chinese communist cadres were engineers: they wanted to get their hands on shiny new U.S. technology. We had heard of a Chinese delegation to Australia where one member of the Chinese party went to the bathroom and didn’t emerge for half an hour. Fearing the worst, his Australian hosts opened his cubicle—to find him deconstructing the dual-flush toilet to see how it worked.

We felt immediately that Shenzhen’s plan would work. U.S. companies would come for the cheap wages and stay because the ownership prevented them from leaving. The workforce would be kept compliant by the Chinese Communist Party—wildcat strikes and genuine trade unions weren’t going to occur. And over time, these new Chinese capitalists would strike out on their own with the technological know-how they had acquired from their American partners. This approach to industrialization would succeed.

But China’s success implied long-term problems for American workers. The factories of the 1980s and 1990s would be built not in Chicago, but in Shenzhen. As China rose, America succumbed to the disease of the Rust Belt: factories closed down and rusted away. The salve to American consumers was that their skilled industrial jobs might be gone, but look at all the cheap goods from China.

This was a second, and in the end, more persistent source of declining inflation, on top of Paul Volcker’s savage interest rate rises that caused America’s deep recessions in 1980 and 1981-82. The far-lower wages of Chinese workers, and the sheer scale of the Chinese workforce, introduced a deflationary trend to capitalism that had no precedent. This was amplified by the “just-in-time” manufacturing trend, which minimized waste and increased quality but made factories susceptible to supply bottlenecks.

The global supply chain that resulted was incredibly efficient but also very fragile. The recent surge in inflation is due primarily to this fragile chain being broken by COVID-19. The global economy will also be increasingly hit by shortages in essential inputs—especially as global warming forces a shift from fossil fuels to renewables, which consume rare minerals rather than the detritus of ancient animals and plants.

These are the main factors behind today’s inflation. Though it has the same superficial characteristics as the inflation of the 1970s, it is driven by entirely different and far less tractable factors. It isn’t your Daddy’s inflation, and your Daddy’s cures—higher interest rates and shifting production to low-wage countries—aren’t going to work against it.