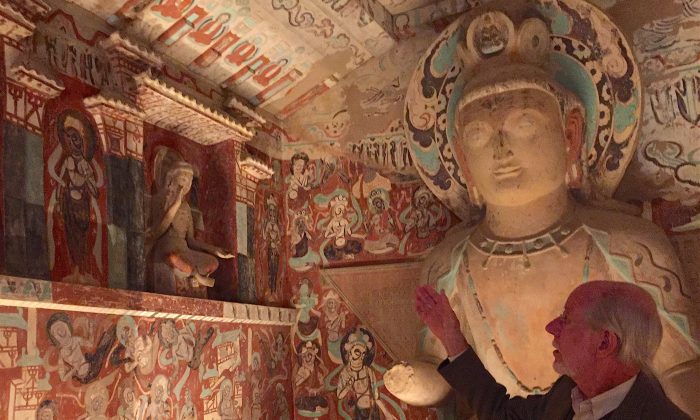 Neville Agnew, a senior principal project specialist at the Getty Conservation Institute, describes the meaning of wall paintings in a replica of a cave from Dunhuang, China at the Getty Center museum in Los Angeles, Calif. on June 1, 2016. (Sarah Le/Epoch Times)
Southern California

LOS ANGELES—For one last weekend, visitors to the Getty Center in Los Angeles can feel like they are actually inside three ancient temples caves along the Silk Road near Dunhaung in Western China, without actually going there.

In a tent on the plaza are three replicas from the Caves of the Thousand Buddhas, a collection of 492 caves dug by hand into cliffs at the edge of the Gobi Desert during a thousand-year period from the 4th to the 14th centuries.

The handmade replicas were created from some of the same materials as the original cave art in Dunhuang and are very valuable and delicate, just like the originals.

Ancient legend tells of a monk named Yuezun who in 366 C.E. had a vision of a thousand radiant Buddhas standing along the cliffs’ face. He was inspired to start excavating the caves, which now contain far beyond a thousand paintings and sculptures of Buddhas.

Dunhuang became an important historic, spiritual, and cultural site and was also the first trading town reached by foreign merchants entering China along the Silk Road. However, the caves eventually fell into disuse, and the site was forgotten for centuries until a Daoist monk discovered its historic treasures in the year 1900.

A Piece of Dunhuang Comes to New York

Also known as the Mogao Grottoes, the UNESCO World Heritage site contains the largest collection of historic documents and Buddhist art along the Silk Road. Many of the richly decorated caves date from the Tang Dynasty (618-907 C.E.), which is considered to be the peak of Chinese civilization.

At the Getty, visitors can also see an indoor exhibit with documents and silk paintings from the site, information about the conservation of Dunhuang, as well as a 3-D virtual, immersive experience of one of the caves.

One of the objects on display is the Diamond Sutra, a sacred Buddhist text from the year 868. It is the world’s oldest dated complete printed book and was found in the Library Cave, which housed nearly 50,000 manuscripts, paintings, silk embroideries, and other rare textiles.

“I think people can see the glory of Chinese culture and art from ancient times,” said Agnew. “There’s a great deal to be seen here.”

The Cave Temples of Dunhuang will be open through September 4, 2016, and guided tours are available.

The Getty Museum and the Dunhuang exhibit is free to the public, but to reduce wait times, a limited number of free, timed tickets will be given to the replica caves each day. Parking at the museum is $15.