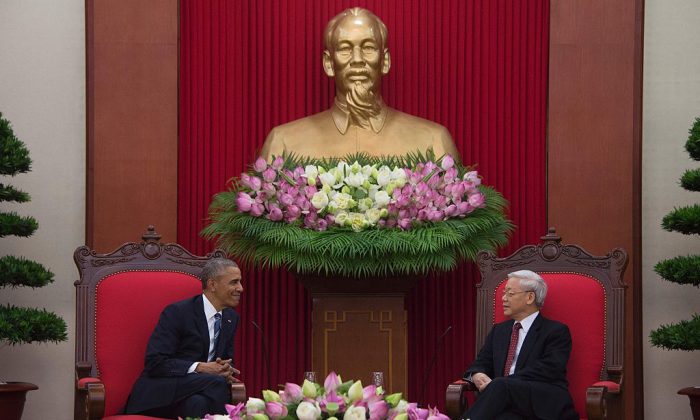 On May 23, the United States made a diplomatic move in the Asia–Pacific region that strengthens the growing coalition against the Chinese Communist Party (CCP), deepens U.S. influence in the region, and expands the number of nations around China that are shifting away from pacifism and inaction.

The CCP’s response was to welcome the move, and declare it a healthy development for the world.

If that response seems uncharacteristic of the CCP, you’re right, but only because its interests rest much deeper.

The move in discussion is President Barack Obama’s lifting of the decades-old arms embargo on Vietnam. He met with Vietnamese leader Tran Dai Quang and declared, according to The Associated Press, “This change will ensure that Vietnam has access to the equipment it needs to defend itself and removes a lingering vestige of the Cold War.”

In response, Chinese Foreign Ministry spokeswoman Hua Chunying said, according to a transcript, that China is “happy to see Vietnam develop normal relations with all countries, including the U.S.”

With the CCP, all of its responses—whether through its Foreign Ministry spokesperson or its state-run news outlets—are going to be tightly regulated, and with something on this scale, also tightly calculated.

What’s interesting about this development is that the CCP seems to have assessed that it’s more in its interest to feign support for the development than to criticize it. And its likely interest is the potential that this could act as a springboard for it to begin lobbying the United States and the European Union to lift similar arms embargoes on China—which were set in place after its Tiananmen Square massacre in 1989.

Vietnam’s poor human rights record has been one of the deal’s main points of criticism, and the fact that Obama went ahead with the deal despite this likely has some Chinese leaders rubbing their hands together.

The Chinese regime pushes an ideology in its form of diplomacy that human rights shouldn’t get in the way of politics. This policy has enabled it to forge alliances with some of the world’s most despotic regimes, and to build its own bloc of influence with countries the United States and European Union refuse to deal with.

This factor has brought strong criticism onto the CCP, since its support of countries like North Korea allows totalitarian regimes to sustain themselves when they would otherwise very likely collapse.

Of course, Vietnam isn’t as bad as North Korea, but it is run by a communist one-party government, and it also has some of the same human rights abuses as other communist states. According to a freedom ranking of countries by Freedom House, Vietnam scored 20 out of 100 with 0 being the least free. It notes that Vietnam has almost no political freedom and few civil liberties.

What’s interesting about China’s response to the new deal is that its propaganda thinkers have apparently assessed that the benefit of a muted response outweighs the benefit of criticism—particularly since this will likely shift the tides further against its favor in the Asia–Pacific region.

The deal itself is more symbolic than anything. Its main impact will likely be much less on Vietnam’s military strength and much more on how Vietnam is perceived globally.

Vietnam was already buying military vehicles and equipment from Russia, and the shift in U.S. stance is unlikely to make Vietnam much more of a military threat to China than it already is. Vietnam has more military personnel than the United States, with close to half a million in active service and a reserve force of three million.

But if recent history tells us anything, the CCP does view this new deal as a threat and is holding its tongue. When the United States began lifting its arms embargo on Vietnam in 2014, the CCP’s state-run People’s Daily criticized the deal and accused the United States of interfering with the “balance of power in the region.”

The “balance of power in the region” is what this new deal will likely impact most. What it changes is how the United States views Vietnam, and it may help Vietnamese diplomacy with other nations as well. As Japan Times reported, it will reduce the “political sensitivity” that nations would otherwise face when strengthening ties with Vietnam.