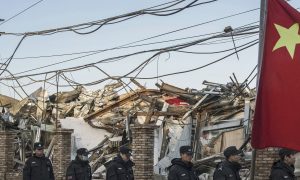 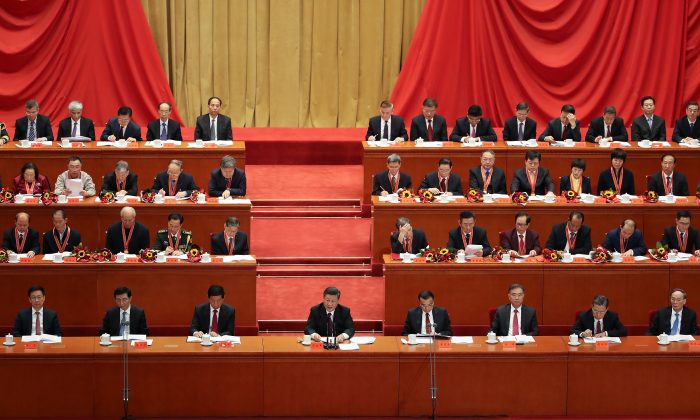 Chinese leader Xi Jinping gives a speech for the 40th Anniversary of Reform and Opening Up at The Great Hall Of The People in Beijing on Dec. 18, 2018. (Andrea Verdelli/Getty Images)
Chinese Regime

The Chinese Communist Party’s (CCP) commemoration of the 40th anniversary of “reform and opening up” in December has caused a lot of negative reaction at home and abroad. Over the past 40 years, China’s economy and society have undergone tremendous changes. While the CCP regards the country’s economic progress as its own, the Chinese people are worried about the future because they can see how that progress was really achieved.

The CCP has repeatedly boasted that China has made tremendous progress since the start of the “reform and opening up” in 1978, and listed detailed data on personal income, education and life expectancy. The high ranking CCP officials claimed that the days of famine and starvation were over.

However, the CCP avoids two questions: Who caused the people to starve? And how did the current progress come about?

Why did the Chinese People Starve Before the “Reform?”

After the CCP usurped China’s political power in 1949, it has completely re-written and falsified its history through education, historical research, literature, and the arts. The most typical example is the creation of the so-called the “old society.”

At the beginning of the CCP’s rule, it launched several campaigns. Mao Zedong launched a “mass killings of landlords” from 1947 to 1976 in order to redistribute land to the peasant class and landless workers. It resulted in tens of millions of deaths (13,500,000 to 14,250,000). A series of campaigns—the “three-anti campaign” (1951) and “five-anti campaign” (1952)—consolidated Mao’s power base by targeting political opponents and wealthy capitalists. “Public-private partnerships” eliminated Chinese landlords and capitalists. Agrarian reform or “agricultural cooperation” and “people’s communes” (1958-1983) completely deprived farmers of their land.

By 1958, the CCP launched “Great Leap Forward,” a campaign aimed at transforming the country from an agrarian economy to a socialist society through industrialization and collectivization. The country manufactured steel to support its military industry and to compete globally. However, industry and commerce of the Chinese society at that time was severely damaged by the eradication of the capitalist class, and agricultural production was minimal because farmers lost their lands. Soon it followed the unprecedented “Great Chinese Famine.”

Yang Jisheng, a former reporter of the CCP’s mouthpiece, Xinhua News Agency, wrote a book called “Tombstone: The Great Chinese Famine, 1958-1962,” which is considered to be one of the most detailed and authoritative records of the Great Chinese Famine. Between 1958 and 1962, 36 million people starved to death in China. The CCP claimed that it was natural disaster between 1959 to 1960 that caused the famine, but the weather was good for crops during those years. Yang said the Great Famine was completely a man-made disaster.

Frank Dikötter, a Dutch historian and China expert, said in his book “Mao’s Great Famine” (2010) that at least 45 million people died from unnatural death from 1958 to 1962. Dikötter listed the Great Chinese Famine as one of the three major man-made disasters in the 20th century—along with the gulag, the Soviet forced-labor camp-system, and the Holocaust, a genocide during World War II in which Nazi Germany systematically murdered some six million European Jews.

At least 40 million Chinese starved under the CCP’s rule during the great famine. Despite that tragic period, the CCP launched another decade-long catastrophe—the Cultural Revolution—to eradicate Chinese traditional culture and ethics in 1966.

After the end of the Cultural Revolution, China’s economy completely collapsed and the CCP was on the brink of extinction. So it was forced to “reform.”

The “Reform” of the CCP—Less Economic Intervention

In December 1978, the Third Plenary Session of the 11th Central Committee of the CCP proposed “reform inside China and open up to the outside world,” which was regarded as the beginning of the “reform and opening up” of the CCP.

The CCP convinced the Chinese people that the “reform and opening up” would be a successful strategy that could end their hardships. The psychology behind this logic is similar to a condition called Stockholm syndrome.

Stockholm syndrome is a complex psychological response wherein a captive begins to identify closely with his or her captors, as well as with their agenda and demands as a survival strategy during captivity. It originated from a bank robbery in Stockholm, Sweden in 1973. Four hostages were taken during the robbery. Six days later, the robbers surrendered to the police and the hostages were released. In such a frightening situation, the hostages developed a strong dependence and identification with the captors and even defended them.

To put it simply, victims psychologically identify with the perpetrator under fear and despair. The Stockholm syndrome can be applied widely in today’s Chinese society—the CCP is able to maintain its rule over its people because it has such a strong hold over them. The so-called great achievement of the “reform and opening up” is the Stockholm syndrome with “Chinese characteristics.”

The landmark event initiated by the “reform” was the household responsibility system or contract responsibility system— commonly known as the “big contract”—in which the Communist regime gave farmers a quota of goods to produce and compensated them for meeting the quota.

The first “big contract” was signed on Nov. 24, 1978 by 18 farming households in Xiaogang Village, Fengyang County, Anhui Province. These households had to sign the contract with local cadres to meet their quotas, and their lives depended on it. In 1979, the income of these 18 farmers increased by six times, compared with the previous year. In 1980, the CCP affirmed the practice of large-scale contracting. In 1982, the CCP began to promote large-scale contracting in rural areas.

The case of Xiaogang Village, which was regarded as a reform model by the CCP, shows a typical Stockholm syndrome.
The so-called household responsibility system is just a typical agricultural system, being adopted in all countries in ancient and modern times. The 18 peasants were just renting the land that was theoretically their own. Why did they have to sign a life and death contract, risking their lives and vowing not to break it? It indicates that as long as the CCP doesn’t punish or torture the common people, they will regard a good outcome as the CCP’s achievement and something to be grateful for.

The CCP’s so-called economic reforms are essentially just easing the Party’s intervention and control in some areas of the economy, or making less trouble for the people.

Looking back at the hardships and suffering that the CCP brought to the Chinese people before the “reform,” it is not difficult to imagine that many Chinese people suffer from the Stockholm syndrome under the fear and terror created by the CCP. The 40 years of changes in China’s economy and society have been advertised by the CCP as its achievements of the “reform and opening up.” In fact, it is just the outbreak of the Chinese-style Stockholm syndrome.

In the past 40 years, China’s economy and its people’s lives have greatly improved due to foreign trade—economic and technological exchange and cooperation—with other countries, particularly the United States. (the so-called “opening up”).

According to the statistics of the United States Department of Commerce, the U.S. trade deficit with China in 2017 was $375.23 billion, accounting for almost half of the total trade deficit of the U.S. The U.S. has been China’s largest export market for many years. Since 1985, China’s total trade surplus with the U.S. has accumulated to more than $5 trillion. From the numerical point of view, China’s foreign exchange reserves are basically all from the trade surplus with the United States.

The United States plays a significant role in China’s foreign trade and economic development, both in the past and present.

Foreign investment and foreign trade, including the United States, have brought the rapid growth of China’s technology, management, efficiency, supply chain and surrounding industrial chain, employment, and foreign exchange surplus—all of which have played an indispensable role of China’s economic growth.

Looking at China’s “reform and opening up” for 40 years, the biggest role played by the CCP is actually loosening the Party’s control over the economy. Now that the country faces economic problems, the CCP is going to strengthen the control of the Party. Observers inside and outside of China are worried and feel pessimistic about the country’s economic future.