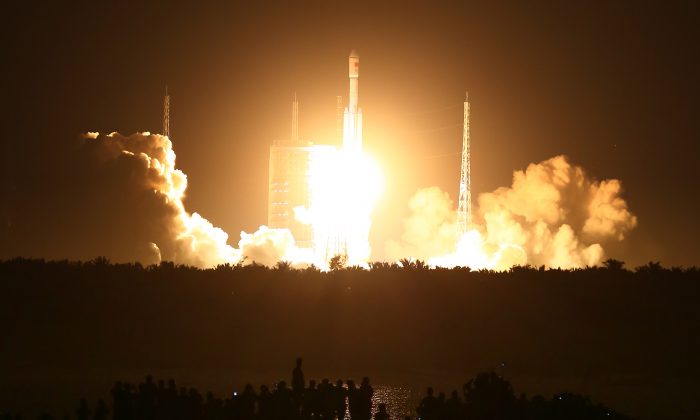 China has become competitive in commercial space launches by engaging in the same reckless behavior it used to build the world’s largest intermediate missile inventory.

A Rand Project Air Force study published during President Trump’s first year in office revealed that China’s People’s Liberation Army (PLA) had achieved parity with the United State regarding a potential Taiwan or South China Sea military conflict. As a one-party state and non-signatory to the US-Soviet 1987 Intermediate-Range Nuclear Forces Treaty, the PLA went on a crash program that ignored individual safety and environmental concerns to build 2,000 non-treaty compliant ballistic and cruise missiles.

The most shocking development in the Rand report was the rapidly improving capabilities of PLA space-based anti-satellite and laser weapons. The Union of Concerned Scientists database reveals that China has gone from zero operating satellites in 1996 to 299 in March 2019, second only to America’s 901.

China Aerospace and Technology Corporation (CASC) has grown from a tiny sector of the Fifth Academy of the Ministry of National Defense to be ranked 343 on the Fortune Global 500 list with $34.3 billion in annual revenue, 173,000 employees, and a 2019 space launch backlog of over 30 scheduled missions. CASC claims that it exercises “social responsibility” in all the space and technology activities it undertakes by “making efforts to promote the unity of economy, social development and a sustainable future.”

But CASC as a state-owned-enterprise has become hyper-competitive in commercial missile launch services because it operates under an “extremely lax regulation” that plays a critical role in China’s ability to undercut the U.S. space launch industries, according to Greg Autry, a former member of the Trump administration’s NASA Landing Team and director of the Southern California Commercial Spaceflight Initiative (SCCSI).

CASC staff is also cross-pollinated with the PLA Rocket Force personnel that carried out the first tests of China’s DF-26 anti-ship ballistic missiles that were fired into the South China Sea on July 1. The 46-foot tall and 44,000 pounds ship-killer is rated “dual-purpose” to accommodate several types of nuclear and conventional warheads.

The missile test launches were meant to intimidate the U.S. Navy that patrols the area and multiple adjacent South Asian nations. China, despite United Nations law, claims the entire 1.3 million square miles of the mineral-rich South China Sea as its Exclusive Economic Zone and is threatening to use offensive weapons to maximize its interests.

CASC made its 200th commercial launch in December and launched its 100th multiple-stage Long March-3 rocket in March, successfully placing navigation satellite into orbit. But it is unlike U.S. company SpaceX’s rocket that launches over water and recovers its boosters for reuse.

“What these rural farms probably don’t know is that the Long March 3B runs on a hypergolic mix of unsymmetrical dimethylhydrazine (UDMH) and nitrogen tetroxide (NTO). UDMH is a toxic fuel and a known carcinogen that mixes well in water. The rocket’s N204 oxidizer is also extremely dangerous, causing liver damage.”

A 1996 commercial contract launch of a U.S.-built Intelsat 708 satellite from Sichuan Province’s land-locked Xichang Satellite Center near the Vietnam border resulted in a fully-fueled missile launch going off-course and pulverizing a local village. The Chinese regime claimed only 6 deaths and 57 injuries, but smuggled video revealed tremendous destruction and over 100 deaths.

Examples of China’s intentionally reckless action in space include launching a manned-Shenzhou-7 spacecraft from Jiuquan Satellite Launch Center in 2007 that passed within 28 miles of the U.S.-Russian International Space Station, forcing the ISS to execute a powered maneuver out of its orbit. Later that year, China used a modified DF-21 ballistic missile with a “Kinetic Kill Vehicle” traveling at 5 miles a second to target and destroy one of its non-functioning satellites and create the biggest debris field in space.

At least 44 of the recent CASC Long March 3 missile launches are related to China’s ambitious BeiDou Navigation Satellite System that has created a mixed-use geostationary satellite constellation to support its military, state and commercial sector interest in a “GPS” alternative to the U.S. Global Positioning System.