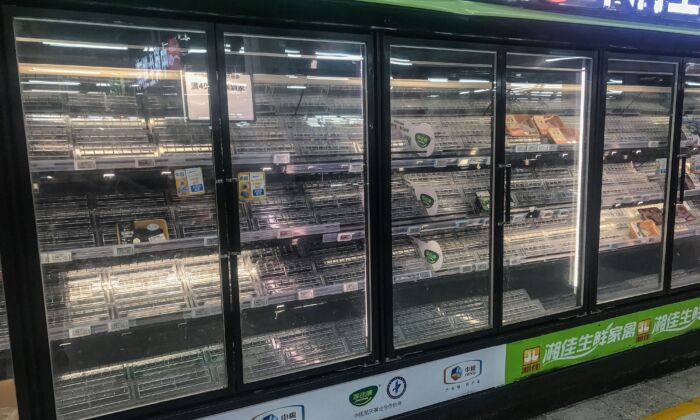 Empty shelves are seen as people buy items at a supermarket in Wuhan, in China's central Hubei Province, on Aug. 2, 2021. (STR/AFP via Getty Images)
Thinking About China

Chinese leader Xi Jinping cannot seem to get a break. Perhaps he does not deserve one. This year, he has faced Evergrande, real estate excesses generally, a renewed spate of COVID-19 infections, and sporadic power shortages across the country. Most recently, Beijing has had to deal with a food panic.

It seems that a poorly thought-out government communication prompted fears of shortages and the inevitable hoarding. The authorities have had to walk back their directive, a rare enough event in China at any time, but more interesting is what the panic implies about public thinking. Understandably, Chinese people are skittish after the pandemic lockdowns and quarantines, but the tendency to panic also suggests something more fundamental—that the Chinese people, intuitively if not explicitly, are well aware of the weaknesses in China’s centralized approach to economics.

The sequence of events is straightforward enough. Beijing, accidentally no doubt, laid the groundwork for trouble. It had already emphasized the need to avoid wasting food and included in the latest Five-Year Plan, the 14th, the first mention of grain production targets since Mao Zedong. That alone must have raised flags with some people. Xi then began to emphasize the need for China to become self-sufficient in grain production, saying, rather poetically, that “the rice bowl must be firmly kept in Chinese hands.”

With sensitivities raised, the Ministry of Commerce a few weeks ago announced that people might do well to stockpile essentials, to prepare perhaps for renewed lockdowns and quarantines should COVID-19 infections rise again. Almost immediately, a sense of urgency spread through the population. Older people began to bring up the great famine of 1958-1962, and householders immediately started to hoard foodstuffs. Long lines formed at grocery stores, which quickly ran out of produce. Prices reflected the pressure.

Beijing moved as quickly as it could to quell the panic. The ministry removed its stockpiling guidance, while every government agency put out information to show that food supplies in China are more than adequate. News outlets published statistics on how much land China has under cultivation and how farming has increased over time. Beijing explained how the economy focuses on essential crops, wheat, and rice, and how this emphasis has allowed China to reduce wheat imports by some 40 percent and has turned China into a net rice exporter. This damage control went on the explain that imports of soybeans and corn are simply to supplement domestic production and that they, too, are plentiful.

Things have calmed, but if the sudden fears of Chinese householders were a misplaced response to a clumsy government communication, the people’s tendency to panic says something more fundamental. Aside from a certain skittishness bred from the hardships of quarantines and lockdowns of last year and earlier this year, the predisposition to panic seems also to reveal a general wariness about the reliability of Beijing’s planning. Few, no doubt, can quote chapter and verse from economic theory, but life under a centralized system surely has sensitized the Chinese to its pitfalls and weaknesses.

The problem is that a centralized system makes decisions for the whole economy. Mistakes consequently occur at a grand level, and often result in the creation of great waste and huge misallocations of resources. China’s housing problem today is indicative.

Whatever Beijing says now about excessive debt and the need for moderation, its planners had emphasized residential construction for years. Provincial and local governments have long worked actively with developers. Now it is apparent that the whole emphasis stemmed from grave miscalculations, not only about how much housing China needed, but where it was needed. As of the last measure, some 20 percent of the country’s housing is unoccupied. The economy has for years expended huge capital and human resources to no practical purpose, and certainly not to the benefit of the Chinese people.

With this and other mistakes on record, such as high-speed rail lines to nowhere, it is easy to see why so many Chinese, when encouraged to stock up on food, thought the worst and saw the government directive as an effort to accommodate another such mistake.

Of course, market economies make mistakes, too, and often suffer waste. But since decision making in markets is decentralized, errors occur at the firm level, seldom at the national level, and so seldom reach the proportions of missteps made in a centralized system. Also because decision makers in a market system take their cues from pricing changes, adjustments to missteps begin sooner than in a centralized system where planners often remain unaware of problems until they reach a critical size. Even then, adjustments can wait until the following year’s plan.

Curiously, a perfect illustration of decentralized market responsiveness comes out of Chinese agriculture. African swine fever decimated China’s pig herd in 2019. The planners adjusted in the next year’s plan. Fortunately, small Chinese farmers are not yet as integrated into the planning as Beijing perhaps would like. Watching the price of pork skyrocket in 2019, thousands of them jumped ahead and began almost immediately to raise pigs. Consequently, the herd was close to being replenished, even before planning started. As a result, all in China now—even during the worst of the food panic—were, and are, secure in the knowledge that pork is plentiful.

It does seem that the food scare was only a scare. All the figures and descriptions offered to calm householders suggest that China’s huge population of 1.4 billion will avoid hunger. If that is a relief for everyone with human feeling, the more interesting aspect of these recent events is the alacrity with which the Chinese people assumed a worst-case possibility, and how that reaction reveals at least an intuitive understanding of the weaknesses in the system that Beijing now seems determined to rely on still more than any time since Mao.