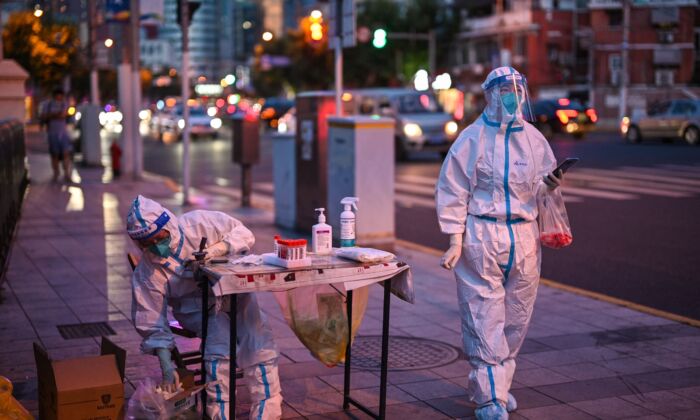 Health workers wait to test people for the Covid-19 on a street next to a residential area in the Jing'an district of Shanghai on July 5, 2022. (Hector Retamal/AFP via Getty Images)
China Business & Economy

The economic growth in China slowed sharply in the second quarter, underscoring the price of the regime’s zero-COVID policy and challenging Beijing’s whole-year target.

Gross domestic product (GDP) grew 0.4 percent from a year earlier, the National Bureau of Statistics (NBS) said on July 15. The official figures marked the worst performance since the country began recording data in 1992, excluding a 6.9 percent contraction in the first quarter of 2020, the onset of the COVID-19 pandemic.

On a quarterly basis, China’s economy contracted 2.6 percent from the January to March quarter.

“The downward pressure on the economy has increased significantly since the second quarter,” Fu Linghui, the spokesperson of NBS, told reporters at Friday’s press conference. Fu blamed the slump on the risk of stagflation in the world economy, tightening monetary policies of major economies, and domestic COVID-19 outbreaks.

During the second quarter, Chinese cities, from the prosperous east coast to border towns in the west, had been through partial or full lockdown under the regime’s zero-COVID policy. The largest city-wide closure was in Shanghai, with 25 million being sealed in their homes for two months. The shutdown of Shanghai, the country’s wealthiest city and home to the world’s biggest port, halted factory production, ravaged global supply chains, and even disrupted health care services in the United States.

The strict COVID-19 curbs have taken a toll on the economy. Output in Shanghai shrank 13.7 percent year-on-year in the second quarter, official data show. Beijing saw a contraction of 2.9 percent in the same quarter from a year earlier, though the capital city avoided a Shanghai-style lockdown.

For the first half of the year, GDP grew 2.5 percent from a year earlier. Analysts suggested that the Chinese regime is likely to miss its growth target in 2022, even though official data in June offers a sign of recovery after many COVID-19 curbs across the country were eased.

According to CNBC, the median GDP forecast among investment banks was 3.4 percent as of late June. It’s far lower than Beijing’s target of “around 5.5 percent,” the lowest level in nearly three decades.

But missing the economic target poses a political test for the Chinese Communist Party (CCP), which is set to hold its twice-a-decade party conclave this autumn. During which, the Party leader Xi Jinping is expected to secure an unprecedented third five-year term in office.

Friday’s data showed industrial output in June grew by 3.9 percent from a year earlier, quickening from a 0.7 percent increase in May. Fixed asset-investment, a driver Beijing is counting on to shore up growth, grew by 6.1 percent in the first six months of the year from a year earlier.

Retail sales also increased, up 3.1 percent from a year ago in June and marked the quickest growth in 4 months, after authorities reopened Shanghai on June 1.

Despite improvement in June’s economy, the CCP’s unwavering commitment to its zero-COVID policy means the threat of new lockdowns and mass testing still exists. On July 11, officials placed Lanzhou, a city of 4 million in the northwestern province of Gansu, under partial lockdown, with four districts being sealed off.

As of July 11, thirty-one Chinese cities that accounted for 25.5 percent of GDP are in some form of lockdown, according to an estimate by Japanese bank Nomura, affecting over 247 million people.

China’s official economic data, which have long been under scrutiny from analysts, already show warning signals.

In addition, a shaky recovery in China’s capital-starved property sector is being pressured further by a growing number of homebuyers across the country halting mortgage payments until developers resume construction of pre-sold homes, further denting buyers’ confidence in a market downturn.

Data on Friday showed that home prices growth stalled in June on a monthly basis, while property investment contracted for a fourth straight month and sales extended their declines by another whopping 18.3 percent.

Song Haixia, a shopkeeper who sells food and cigarettes in the northern city of Taiyuan, said sales have fallen by up to 70 percent to as little as 300 yuan ($45) a day. She said migrant workers who were among her customers were driven away by anti-virus measures.

“People are just not making money,” Song, 45, a mother of two children, told The Associated Press. “I am not very optimistic about future prospects.”

Reuters and the Associated Press contributed to the report.