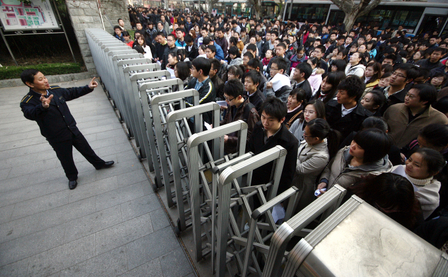 A location for taking the public servant exam in eastern China’s Nanjin City. About 1.03 million Chinese were competing for 16,000 public servant positions in China in 2010. (Epoch Times Archive)
China

China keeps spending more each year on a bulging administration.
By Yue Qing

Over the past four years, the number of public servants in China has increased on average by 128,000 per year, according to a just released official report. These administrative positions come with generous financial benefits that have created bulging expenses.

China also has around 40 million people working in government funded so called “associations,” such as the All China Women’s Federation, as well as “work units,” such as the regime mouthpiece China Daily, a ministry level work unit, Jinghua Times reported in April 2012.

As of now, it is still a state secret in China how much money is being spent on China’s public servants every year, however, from various news reports, people are able to get a rough idea how heavy the burden is.

Although the basic salary is not that high, many positions provide various subsidies and allowances. A study by associate professor Sun Lin from the School of Economics at Fudan University shows over 300 types of allowances given to public servants by various local authorities, the National Business Daily report said.

Besides their income, subsidies, and allowances, Chinese public servants also enjoy well above average pensions and medical and housing benefits. For example, a 2006 government regulation stipulates that a retired public servant, after serving 20 years, should receive as pension no less than 80 percent of the salary before retirement. In contrast, the figure for an average Chinese worker was only 44 percent in 2008.

The increase of public servants has lead to increased administrative spending. According to data from China’s National Bureau of Statistics, during the 12 year period from 1995 to 2006, China’s administration management cost has increased 6.6 times, from 99.654 million yuan (US$16.2 million) to 757.105 million yuan (US$123.3 million).

Translation by Tan Hohua. Written in English by Gisela Sommer.