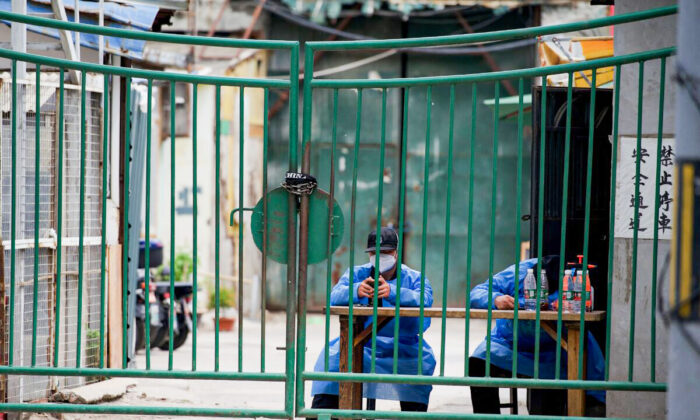 Security guards man a residential area under a lockdown in Beijing on May 11, 2022. (NOEL CELIS/AFP via Getty Images)
By Dorothy Li

Hospitals in the United States are on high alert, with some doctors prioritizing patients in critical condition as the prolonged COVID-19 lockdown in Shanghai has caused a global shortage of chemicals used in medical imaging.

Some of the largest U.S. hospitals said earlier this month they were facing significant shortages of iodinated contrast media products, which are dyes given to patients so that their internal organs and vessels can be picked up by CT scans, X-rays, and radiography.

The dwindling supply was due to the temporary closure of the production facility of General Electric’s health care unit in Shanghai, a trade hub that has been locked down for nearly two months. Though the factory has been allowed to resume operation gradually, the Greater New York Hospital Association warned that an 80 percent reduction in supply might last through the end of June, according to a May 5 statement.

Some hospitals have started to conserve use of the medical dye. For example, the University of Alabama at Birmingham Health System said they activated a response to aggressively ration the supply of intravenous contrast to address the shortage, according to a May 7 statement. The efforts mean doctors are prioritizing urgent scans and postponing elective tests.

As the fast-moving Omicron variant spread across the country, Chinese cities, from large to small, have imposed various degrees of restrictions under the regime’s “zero-COVID” playbook. The biggest lockdown in Shanghai led to many of the city’s 25 million residents enduring a food shortage. Officials on May 15 said the city has started to reopen, but residents said they still couldn’t step out of their homes.

As of May 10, some 41 cities across the country were under partial or full lockdown, according to estimates by Japanese bank Nomura, accounting for almost 30 percent of China’s economic output.

With factory workers and consumers stuck at home and many businesses forced to suspend operations, China’s export growth last month was at a two-year low. Exports in dollar terms decelerated to 3.9 percent in April from a year earlier, tumbling from a 14.7 percent growth in March, China’s customs reported on May 9.

The sluggish figures from the trade sector, which accounts for about a third of gross domestic product, added to a string of signs that the world’s second-largest economy was slowing down. Factory activity had already contracted at a sharper pace in April, industry surveys show.

Chinese authorities promised to allow some businesses to resume operations within a so-called “closed loop” system where workers live where they work. But only 19 percent of 460 German companies have permits to operate under such conditions, according to a survey by the German Chamber of Commerce in China published on May 12. Of those allowed to produce under lockdown, facilities are running at less than half of their capacity, on average.

“Closed loop productions are inacceptable as a long-term solution for German companies to operate in China,” Maximilian Butek, the executive director of the chamber, said in a statement.

The flash survey, echoing the results of recent findings by the U.S. and European business groups in China, underscored signs that foreign employees were increasingly planning to leave the country due to the regime’s strict COVID-19 strategy.

A recent survey by the American Chamber of Commerce in China found that over half of its 121 members have already delayed or reduced investments as a result of the lockdown. Some 51 percent have already decreased their revenue projections for the year, according to the poll conducted from late April to early May.

“Revenue forecasts for this year are down, but, more worryingly, members don’t see any light at the end of the tunnel,” said AmCham China Chairman Colm Rafferty in the statement.

A gloomier picture was painted by European businesses in the country. The number of companies weighing a shift of investments out of China reached its highest proportion in a decade, according to a survey by the European Chamber of Commerce in China published on May 5.

The survey, conducted in late April, found that nearly a quarter of the 372 respondents were considering moving current or planned investments out of China, more than double the number at the beginning of the year. About 60 percent of businesses have cut their business revenue projections this year, while 92 percent said they had been affected by recent port closures, a decline in road freight, and rising sea freight costs.

China’s zero-COVID policy is the last straw for many foreign investors, who have already been dealing with headwinds like trade conflicts and a deteriorating business environment, said Frank Tian Xie, an associate professor of marketing at the University of South Carolina–Aiken.

At a May 5 meeting of the Chinese Communist Party’s most powerful body, the Politburo Standing Committee, Chinese leader Xi Jinping issued warnings against anyone who criticized, questioned, or distorted the regime’s zero-COVID policy.

Economists have repeatedly warned of the consequences of the strict COVID-19 curbs. Top Chinese economist Xu Jianguo warned at a May 8 webinar that the economic impact of the latest outbreak was 10 times more severe than in early 2020, when the regime initially locked down Wuhan, South China Morning Post reported.

He estimated the curbs, including lockdown and travel restrictions, have cost the country $2.68 trillion this year, the report said.

Getting Cut Off From Rest of World Is CCP’s ‘Greatest Fear’: Analyst

Even with the threat of exodus by foreign investors and a possible economic recession, the communist regime will not give up its zero-COVID policy, as maintaining its power is its ultimate priority, according to Xie. He said that in the worst-case scenario, China could end up going back to being a planned economy.

Gordon Chang, author and a senior fellow of Gatestone Institute, said Xi is likely to double down on his zero-COVID policy if he secures an unprecedented third term in office at an important party conclave this autumn.

“China is determined to apply Mao Zedong’s man over nature narrative,” Chang said in a recent interview with The Epoch Times. “It just isn’t working.”

Donna He and Reuters contributed to this report.