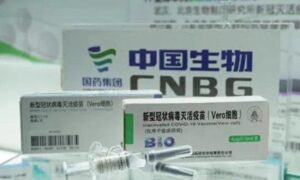 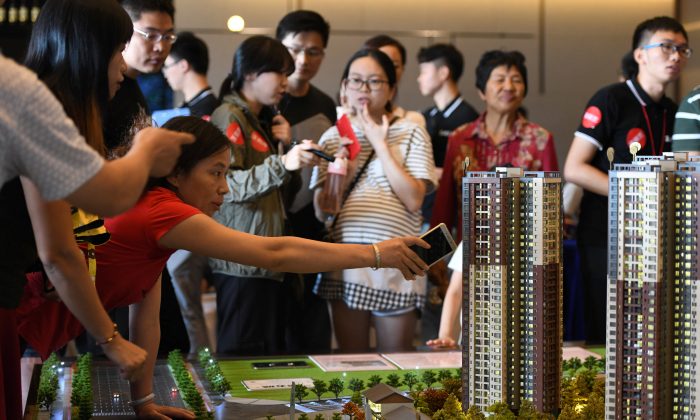 A woman points at the model of a residential compound by China Vanke as a sales agent introduces the property to the visitors at its showroom during the National Day "Golden Week" holiday, in Dongguan, Guangdong Province, China on Oct. 2, 2018. (Reuters)
China Business & Economy

HONG KONG—China’s property developers usually look forward to the months dubbed “Golden September and Silver October” as the high season for new home sales. This year is proving to be different.

Instead, they are feeling a chill and one major realtor has warned that “winter” is coming as developers struggle to maintain sales momentum despite gimmicky promotions and discounts.

After almost two years of local and central government measures to calm the red-hot market, more signs are emerging that the property sector, a major pillar of China’s economic health, is finally slowing down.

They come as the Chinese economy faces broader headwinds, including from an intensifying trade war with the United States and the effects of a campaign by the central government to clampdown on easy credit–a campaign that has weighed on both property buyers and developers.

Home prices rose in August at their fastest pace in nearly two years, but more forward-looking indicators are less robust; property investment growth has been weakening and developers have left a trail of failed land auctions–almost unheard of last year.

September’s figures looked stronger, rising by 10 percent. But that was helped by more apartments for sale in top cities and compared with a weak year-earlier month. Measured against September two years ago, September 2018 sales were down 29 percent.

“There’s downward pressure on home prices especially in third and fourth-tier cities,” said Nomura chief China economist Ting Lu. “They have been previously rising on stimulus policies for two to three years and now they have reached a peak.”

Many developers offered promotions to lure buyers, including free cars and down payments of as little as 10 percent of the purchase price. Other developers slashed prices as much as 30 percent.

“Looking forward, as developers are facing quite big capital pressure and a hot property market in the past two years have overdrawn part of the future demand, so the market is facing relatively large pressure,” said CRIC analyst Xin Shen.

Sentiment started to turn more cautious at the start of the second half of 2018 following a surge in failed land auctions. Buyer queues have grown shorter, in contrast to last year when developers were often overwhelmed with demand from would-be homeowners.

“When the market capacity reaches a certain high level it will go downward because people’s purchasing power, financing capability and repayment ability are limited,” said Nomura’s Lu, who expects a downtrend in both home sales and prices.

In the commercial capital Shanghai and in southeast Jiangxi Province, price cuts of up to 30 percent by Country Garden Holding Co, China’s biggest property developer by sales, drew angry protests from existing homeowners who had not received such an offer.

Country Garden said promotions during the traditional high season were normal practice and the discounts only targeted returning customers.

China Vanke also faced protesters in the eastern city of Xiamen after it offered new buyers discounts of around 30 percent.

Vanke’s price cuts were specific to certain developments and the Xiamen project offered discounts because it is situated in a remote location, said a source close to Vanke, who declined to be named as he was not authorized to speak to the media.

In a meeting last month, China Vanke Chairman Yu Liang told staff that “survival” was the ultimate goal for its next three-year strategic plan, as “the turning point has really arrived” for the industry, according to the minutes of the gathering seen by Reuters.

He said he was concerned about cash collection and inventory, so the company should invest more strategically going forward.

Other parts of the industry are also feeling the strain.

Centaline, a major realtor, is cutting benefits and bonuses for employees in Shanghai, according to an internal email seen this week by Reuters and confirmed by the company, in order to “prepare for the winter.”

The agency told Reuters more streamlining plans may follow in the Shanghai unit, which has recorded losses almost every month this year, and in other cities.

“In the past, the average transaction volume in Shanghai’s secondary market was over 20,000 units a month; now it’s halved to around 12,000,” Centaline China Chairman Sherman Lai told Reuters.

“Last year, we managed to absorb Shanghai’s spillover demand in its peripheral cities, but this year those smaller cities have all introduced tightening measures after a spike in prices, so there’s a sharp drop in business both inside and outside Shanghai.”

“I expect the market will be about the same next year, so we need to adjust our scale and cost structure to a level that can survive through the winter to see a spring, which is still far, far away.”