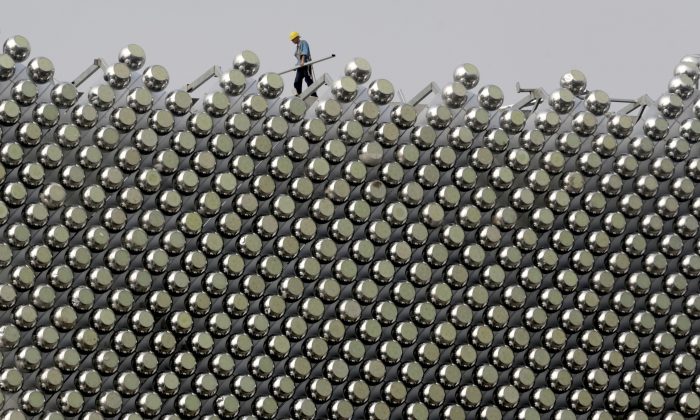 Mainland Chinese borrowed almost $100 billion in August alone to buy houses. Roughly 70 percent of new loans are mortgages. Prices in Shenzhen and Shanghai are up more than 30 percent over the year, and most analysts are calling for the burst of the second China real estate bubble since 2014.

However, between the dramatic price increases, the leveraging of the Chinese consumer, the buildup of ghost cities, and Chinese officials’ scrambling to quench their citizens’ desire for prime real estate, there is a positive takeaway.

“Property is at the intersection of some critical reforms, including liberalizing the capital account, granting more rights to urban migrants, and promoting mortgage finance as a new engine of growth. How these complex reforms play out, especially on the demand side of the housing market, will help determine the pace and breadth of China’s economic slowdown,” wrote Diana Choyleva, chief economist at Enodo Economics, in a recent report.

She says it’s perfectly rational for Chinese to use their $9 trillion in savings to buy houses, even if some of them are empty. Even though Chinese try their best to funnel some of the money out of the country to buy property in London, Sydney, and New York, stringent capital controls still prevent most ordinary citizens from doing so.

As of mid-2015, the stock market is not an alternative for investment any longer, and bank savings have a notoriously low-interest rate, often negative in real terms. Also, Chinese just love to buy everything that’s going up, whether it’s stocks or bitcoin.

So is the Chinese housing market a bubble? In spite of mortgages making up 35 percent of all new loans in the first half of the year, the majority of Chinese house buyers still pay cash for their property—much different from the 100 percent debt-financed excesses of the subprime mortgage bubble in the United States. If the buyers decide to borrow, the loan often makes up only 60 percent of the value of the house.

“Household debt remains very low by global standards and stringent down payment requirements … We would have to see a significant fall in prices before homeowners found themselves underwater,” research firm Capital Economics wrote in a note to clients.

Of course, it would not be China if there weren’t some people who are borrowing money from friends or underground banks to finance their down payment to get a loan from the bank or find other ways to get around the down payment. Al Jazeera showed in a recent documentary that a developer offered to overvalue a house to get a higher loan, so would-be buyers don’t have to pay much of a down payment.

Because of the illegality of these practices—different from U.S. subprime—hard data on these shady loans is hard to come by. According to an earlier report by The Wall Street Journal, shady lenders funded $143 million in down payments in January, a trivial sum compared to the billions in loans taken out.

This property boom, however, is different from the previous Chinese real-estate bubble that burst in 2014, where it was developers and local government-backed companies investing in real estate and taking on massive amounts of debt. As a result, one of the biggest developers, Evergrande Real Estate Group, had to be bailed out by top Chinese banks in 2015. Chinese households were largely unaffected. Instead, they lost a lot of money margin trading on the Chinese stock market in 2015—a real consumer bubble.

Choyleva argues that the regime’s directive to let migrant workers from the countryside settle in cities is part of the relaxation of the rigid household registration system called “hukou.”

“In the past, migrants have not been keen to settle down because they were barred from many of the benefits of urban life, including welfare schemes and access to schools. But as the restrictions of the hukou household registration system are relaxed, attitudes are changing, and pent-up demand for affordable housing is being released.”

With price-to-income ratios for average units in places like Shenzhen approaching 70, according to research by Longview Economics (it’s 16 in London), affordable housing is key to working off the excess inventory. This is why the State Council supported the construction of 7.72 million affordable apartments in urban areas and lending to affordable projects made up 30 percent of total property lending in the second quarter of 2016, according to research by the Institute of International Finance (IIF).

However, there is still a huge mismatch between supply and demand, with around 29 percent of urban dwellings empty compared to just 13 percent in the United States, according to an estimate by RBC Capital Markets. There is also a mismatch in supply and demand at different locations, leading to record price-to-income ratios in Shenzhen, Shanghai, and Beijing.

“Prices are rising in the big cities where there is much less oversupply, if any, in some of the big ones. The majority of the oversupply is in the 2- and 3-tier cities, and migrants and rural residents are encouraged to move there to buy owner-occupied housing. The investment demand is in the big cities,” Diana Choyleva wrote in an email.

As to how to solve these imbalances, despite her less pessimistic view on the housing bubble, Choyleva said a solution will be similar to rebalancing the whole Chinese economy. “There is no easy way; there is no way it’s going to be without pain.”