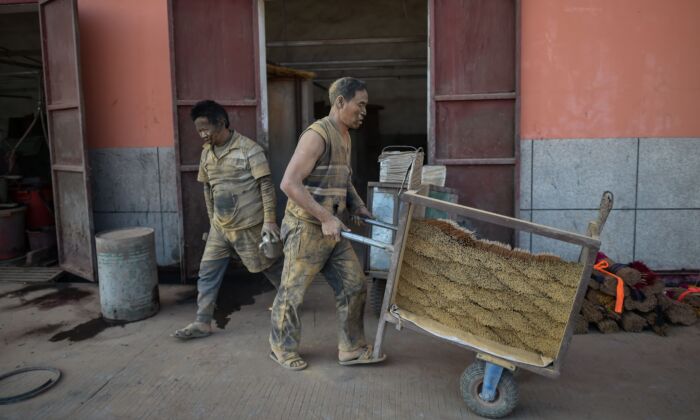 A worker is pushing a cart filled with incense sticks at the Fujian Xingquan Incense Factory in Quanzhou city of southern China's Fujian Province on December 11, 2019. (HECTOR RETAMAL/AFP via Getty Images)
By Nicole Hao

One of China’s richest business entrepreneurs recently ranted on his YouTube channel about how he was forced into retirement by Chinese authorities.

“Suddenly, an organization [of the Chinese government] called me: ‘You must come here to complete the retirement process.’ I’m a private business owner. How can they force me to retire?” Feng Lun said in a YouTube video published on Jan. 2. The video was also available on some Chinese social media platforms.

The Beijing city government told him his pension would be 8,000 yuan (roughly $1,160) a month, a high amount by Chinese standards.

Feng did not reveal whether authorities gave him an explanation for why he was forced into retirement, but he complained that the amount would not be enough for his high-flying lifestyle.

According to an annual list of the country’s wealthiest people compiled by Hurun magazine, Feng was worth 2 billion yuan ($289 million) in 2019.

Feng is just one of dozens of Chinese tycoons who were met with unexpected fates in the past year.

Amid a crushing economic downturn, the Chinese regime pushed a number of policies to prop up state-owned firms, while a growing number of private company executives announced their resignations or retirement amid fears that the Communist Party would become more deeply entrenched in the private sector.

In the coming year, Chinese entrepreneurs are pessimistic about the business environment for private companies. “We [Chinese entrepreneurs] all feel that we had less money in 2018, and have no money left in 2019… But we all say that 2019 will be great compared to the next 10 years,” Feng said in his video.

William Li, the 45-year-old founder and CEO of NIO, a manufacturer of electric autonomous vehicles, is known as the “Elon Musk of China.” He appeared in one of Feng’s videos and said: “Actually, my life in 2019 was difficult and miserable.”

Zhou Hang, co-founder and former chairman of Yongche, China’s first ridesharing platform, said in the same video: “In 2019, no matter which business you invested in, you lost [money].” Zhou said that in 2020, he would rather spend time on his hobbies instead of running his businesses.

Many Chinese entrepreneurs suffered hardships in 2019. For example, Xiao Yongming, the billionaire owner of a fertilizer business, was recently banned from traveling on high-speed trains and airplanes after he failed to pay back his debts—punishment under China’s social credit system. Wang Zhenhua, a real estate magnate, has been detained by authorities on charges of child sexual abuse.

This year, the Chinese regime also pushed for more state intervention in the private sector, piggybacking off its mixed-economy policies launched in 2015 that sought to reform state-owned enterprises and reduce their debt ratios. Those measures included encouraging state-owned firms to publicly list on the stock market or merge with private companies, and pressuring private companies to funnel capital into state-owned firms.

In September 2019, for example, the government of Hangzhou city—one of China’s key manufacturing bases and an emerging tech hub—sent 100 officials to work with 100 of the “most important” private companies in town.

And according to the latest data compiled by Taiwan news outlet Credere Media, 41 Chinese listed private companies changed their ownership to different divisions of China’s agency for overseeing state-owned firms, the State-owned Assets Supervision and Administration Commission (SASAC), in the first 11 months of 2019. The total market value of these companies reached 220 billion yuan ($31.9 billion).

This phenomenon has been dubbed by Chinese netizens as, “state enterprises advance, while the private sector retreats.”

Several high-profile executives also stepped down in 2019. The news of shakeups at some of China’s biggest tech firms fueled more anxiety.

Jack Ma, founder of the world’s biggest e-retailer Alibaba, retired on Sept. 10, on his 55th birthday. Jack Ma is the richest man in China, worth 275 billion yuan ($39.85 billion), according to Hurun.

Pony Ma, founder of internet giant Tencent, resigned from his positions as the company’s legal representative and executive board member on Sept. 19. 48-year-old Ma is the second richest man, with assets valued at 260 billion yuan ($37.67 billion).

Jack Ma dismissed rumors that his retirement was due to pressure from Beijing.

But the announcements came after SASAC director Hao Peng invited Jack Ma to his office on June 16, and invited Pony Ma on July 31. According to the SASAC website, during both visits, Hao asked the two Mas to lead their companies in cooperating with state-owned firms and help the latter to develop.

Others soon followed suit: Dick Wang Wei, founder and CEO of China’s largest courier service SF Express, stepped down from his board chair position on Dec. 10. Liu Chuanzhi, founder and executive board member of computer manufacturer Lenovo, retired on Dec. 18.

Some China analysts speculate that local governments will next seize these executives’ assets, as they are cash-strapped.

Chinese and international economists predict that the country’s economy will grow at a rate lower than six percent—dropping to the lowest levels in decades.

Though the Chinese regime has released stimulus measures aimed at supporting private firms, such as opening up some sectors traditionally monopolized by state-owned firms such as railway, telecommunications, and energy—some officials expressed pessimism.

“The State Council has previously released a lot of policies and rules. The key is execution,” Ma Hui, an official of the state-operated trade association, All-China Federation of Industry and Commerce, told state-run media Yicai on Dec. 22, 2019.