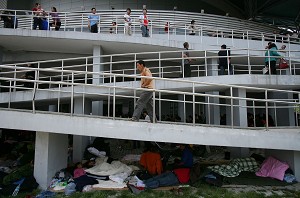 Earthquake victims at the Jiuzhou Stadium in Mianyang, Sichuan province. Mianyang is the site of China's chief nuclear research lab and is on a precautionary alert against radiation leaks. (China Photos/Getty Images)
China

DUJIANGYAN, China—China warned on Friday that a lake damaged by this week's earthquake in Sichuan province may be about to burst its banks, and is also on precautionary alert against possible radiation leaks, according to a government website.

Forty-six seriously injured people needed to be evacuated immediately in Beichuan, at the epicentre of Monday's 7.9 magnitude quake, where the water level of a lake was rising rapidly and may burst, state news agency, Xinhua said.

It did not give details.

Anger has been mounting at the large number of schools which collapsed and there is growing concern about the safety of a number of dams and reservoirs which have been weakened.

Survivors were found on Saturday, five days after the disaster, including a German tourist who was pulled from rubble in Wenchuan after being buried for 114 hours, Xinhua said.

China has put the known death toll at over 22,000 but has said it expects it to exceed 50,000. About 4.8 million people have lost their homes and the days are numbered in which survivors can be found.

In earthquakes elsewhere in the world, survivors have been found a week or more after the disaster. In Baguio in the Philippines in 1990, a cook was found alive in the rubble of a shattered hotel after two weeks.

He had drunk his own urine and drops of rainwater to stay alive. A man and a woman trapped for 11 days in an elevator shaft in the hotel were also rescued.

Among other survivors on Saturday, Xinhua said 33 people were dug out of the rubble in Beichuan, one of the worst hit areas. One young man was rescued after being buried for 104 hours and troops evacuated 18 scientists trapped in a forest in Mianzhu.

The 7.9 magnitude quake compares even with the 1976 tremor in the northeastern city of Tangshan which killed up to 300,000 people.

And as the weather gets warmer, survivors were increasingly worried about hygiene and asking questions about their longer-term future.

“What we don't need now is more instant noodles,” said truck driver Wang Jianhong in the city of Dujiangyan. “We want to know now what will happen with our lives.”

In Beichuan, thousands of homeless flooded out of mountains into the city of Mianyang, many put into military trucks and taken to a refugee centre.

“It was really bad up there,” farmer Dian Minggui said. “The whole mountain changed shape and all the homes are toppled.”

Two schools were among demolished buildings in the township of Xiang'e, northwest of Dujiangyan.

“All the children were buried,” said elderly woman Yang Xiaoqu. “The lucky ones were those who cut class.”

In Sichuan and neighbouring Chongqing, at least 17 reservoirs have been damaged, with some dams cracked or leaking water. Several are on the Min River, which tumbles through the worst-hit areas between the Tibetan plateau and the Sichuan plain.

The Lianhehua dam, built in the late 1950s northwest of Dujiangyan, showed cracks big enough to put a fist in.

“When the dam is in this shape, we cannot feel relaxed,” said farmer Feng Binggui who has moved from his village below the dam into the hills.

China is also on precautionary alert against possible radiation leaks, according to a government website.

China's chief nuclear weapons research lab is in Mianyang, along with several secret atomic sites, but there are no nuclear power stations.

China has sent 130,000 troops to the disaster area, but roads buckled by the quake and blocked by landslides have made it hard for supplies and rescuers to reach the worst-hit areas.